Sarah Huckabee Sanders has taken on a new higher profile in the White House, running the press briefing as a sub for Sean Spicer.

That’s fueled talk that President Donald Trump is monitoring Sanders’ performance to possibly replace Spicer with her at the podium permanently. Sanders denies this.

However, the new role has made people curious about Huckabee Sanders’ family. She certainly has a political name (a double one). That has some asking whether she is related to former Arkansas Governor and presidential candidate Mike Huckabee or Democratic presidential primary candidate Bernie Sanders.

The answer: Yes, she is Mike Huckabee’s daughter. No, she is not related to Bernie Sanders.

1. Huckabee Sanders Is the Daughter of Mike Huckabee & Was Once Called His ‘Field General’

Proud of daughter Sarah subbing at WH press briefing today. Her Dad thinks she crushed it! Hey I'm as unbiased as the media! pic.twitter.com/txXD10ocMf

Huckabee Sanders has been involved in her father’s campaigns for years. She told The Hill that she was 9 when her dad first ran for elected office.

“He didn’t really have much of a staff, so our family has always been very engaged and very supportive of my dad,” Huckabee Sanders told The Hill.

“I was stuffing envelopes, I was knocking on doors, I was putting up yard signs. I’m absolutely my dad’s biggest fan, and anything he wanted to do, I wanted to be a part of.”

A 2007 profile in Time Magazine described her as Mike Huckabee’s “field general.” The former Arkansas governor is well known for his failed turns on the presidential campaign stage, as well as his affable nature and time as governor of Arkansas.

Before joining her father’s 2007 campaign, she worked “as a regional liaison with the Education Department in Washington,” reports Time. She directed field operations for the Huckabee campaign and worked on her father’s 2016 campaign in a prominent role too. She’s also been involved in the campaigns of numerous other candidates for office. 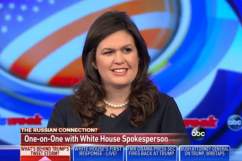 2. Huckabee Sanders Is One of Mike Huckabee’s Three Children With His Wife, Janet

Respect for Packers but Janet and I are COWBOY fans! Go Pokes! Excited to be at game and watch Dak and the BOYS-COWBOYS! pic.twitter.com/7n0ncTyxI3

Mike Huckabee and his wife, Janet, have three children: Sarah and her two brothers, one of whom also worked for Huckabee’s campaign, Time reports.

Sarah Huckabee Sanders has described her dad as her “hero.”

“I got to work for my hero and travel with him on a regular basis,” she told the Hill of her campaign work for him. “It doesn’t get much batter than that for a job.”

Sarah’s brother, David Huckabee, was involved in a controversial incident at age 17 over the hanging of a stray dog at camp, reports Newsweek.

In 2010, Sarah Huckabee married Bryan Chatfield Sanders at the Nazareth Lutheran Church on St. John, U.S. Virgin Island, according to the Arkansas Press-Gazette.

Huckabee Sanders hired her eventual husband to work on her father’s campaign. According to The Hill, “Sanders had been with Sen. Sam Brownback’s (R-Kan.) presidential campaign until it folded, so she hired him and one of his colleagues.”

She told the political site, “They were both kind of cute, [so I said,] ‘Well, we might be able to work something out’ — kidding a little bit there.”

He also worked on Mike Huckabee’s unsuccessful 2016 campaign for president and was previously a media consultant for other campaigns, such as that of Republican Ted Yoho for a House seat in Florida. Sanders created a well-received ad for that campaign called “Pigs.”

Huckabee Sanders, who is age 34, wished her 5-year-old daughter, Scarlett, a happy birthday from the White House podium.

Best part of daughter Sarah at WH press brief? Mentioning my granddaughter Scarlett's 5th birthday today. The rest was great too of course!

Sarah posts about her family fairly frequently on social media.

According to The Washington Post, Huckabee Sanders and her husband also have two other children.

5. Sarah Could Be in Line to Replace Sean Spicer, Some Reports Say

Huckabee Sanders joined Trump’s presidential campaign after her father left the race in 2016, according to The Washington Post. She’s been working as his deputy press secretary, under Sean Spicer, but some reports suggest that might change.

Spicer could find his job on the line after what many felt was a bizarre press conference over the James Comey firing, a CNN report claims.

The highlight – or lowlight, depending on your perspective – came when Spicer allegedly hid behind bushes to dodge the television cameras as the media pressured him for answers on the FBI director’s controversial termination. That account came from the Washington Post, which later wrote that it had updated its story “to more precisely describe Spicer’s location near White House bushes on Tuesday night.”

Spicer was notably absent from the podium on May 10 as reporters demanded answers about the FBI director’s dramatic ouster. Taking his place was Huckabee Sanders, whose handling of the high-pressure briefing was generally well received.

Acosta and Dylan Byers, writing on CNN Money, reported that sources say the perception at the White House is that “Spicer has been ‘benched’ during a critical week, following the president’s termination of FBI director James Comey. And the big question, one source said, is whether it’s temporary or permanent.”

Of course, Spicer has a reason to be gone from the podium this week – a good reason. The press secretary is participating in previously scheduled Naval reserve duty at the Pentagon. However, CNN reported that such service could be rescheduled, and, certainly, the fallout over the Comey firing is a big moment for a presidential press secretary.

It was only the second time that Sanders has run the White House press briefing. However, Politico reported that Trump was “pleased” with her past performance and said she will be handling the briefings for the rest of the week in the wake of the Comey firing. 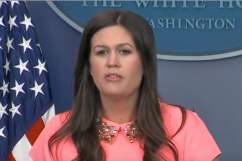