On May 4, the House of Representatives voted to repeal the Affordable Care Act (also known as “Obamacare”), which they replaced with the “American Health Care Act.” During the presidential election season, repealing Obamacare was one of the major planks in Donald Trump’s campaign platform.

A couple of hours after the House vote, President Trump met with Australian Prime Minister Malcolm Trumbull and praised Australia’s health care system as being better than America’s. Australia has universal healthcare, with all citizens’ doctor visits and other health care costs paid for by the government.

The video embedded above starts with Trump answering a question about the AHCA. “Premiums are gonna come down, very substantially, the deductibles are going to come down, it’s gonna be fantastic health care. Right now Obamacare is failing, we have a failing health care—I shouldn’t say this to our great gentleman and my friend from Australia, ’cause you have better health care than we do. We’re going to have great health care, very soon.”

Senator Bernie Sanders, a longtime supporter of universal healthcare, soon responded on Twitter: “Thank you Mr. Trump for admitting that universal health care is the better way to go. I’ll be sure to quote you on the floor of the Senate.”

Thank you Mr. Trump for admitting that universal health care is the better way to go. I'll be sure to quote you on the floor of the Senate. pic.twitter.com/GTFRHiKw6k 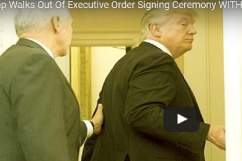