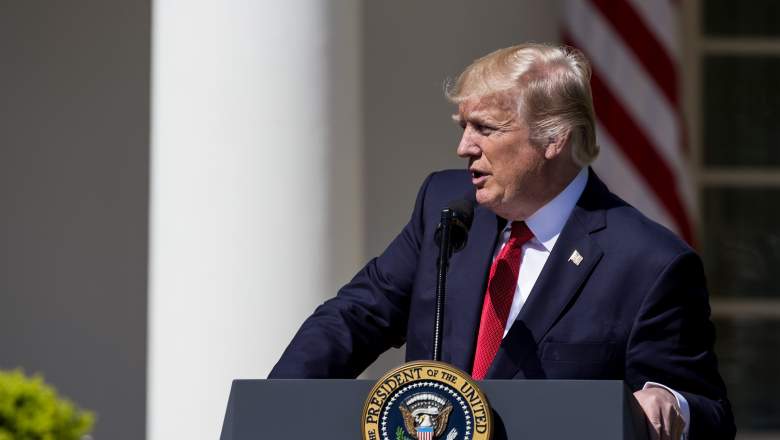 President Donald Trump speaks during a Supreme Court swearing in ceremony in the Rose Garden. (Getty)

Donald Trump has fired FBI Director James Comey as the FBI was looking into potential ties between Russia and the Donald Trump campaign. This is separate, though, from the investigation Congress is doing into Russia’s meddling in the U.S. election. So what’s the current status of that investigation?

There are actually four different Russia investigations currently unfolding on Capitol Hill. One is happening in the Senate; the Senate Judiciary Subcommittee on Crime and Terrorism is currently conducting an investigation into Russia’s role in the 2016 election. This subcommittee consists of Lindsey Graham, John Cornyn, Ted Cruz, Ben Sasse, John Neely Kennedy, Sheldon Whitehouse, Dick Durbin, Amy Klobuchar, and Chris Coons. The committee launched this investigation in February 2017.

“Our goal is simple — to the fullest extent possible we want to shine a light on Russian activities to undermine democracy,” committee Chairman Lindsey Graham said in a statement upon the announcement of this investigation.

The latest update in this investigation is that this past week, Sally Yates testified before the committee, telling them that she warned the Trump White House in January that Michael Flynn was vulnerable to Russian blackmail.

The Senate Intelligence Committee is also conducting its own Russia investigation. The most recent update from them came last week when The New York Times reported that the committee has asked Trump officials to hand over emails and other records of dealings with Russia. James Comey was expected to testify before this committee tomorrow, but instead, acting FBI Director Andrew McCabe will do so.

Meanwhile, the House Intelligence Committee has its own Russia investigation going. However, they ran into some controversies last month when Devin Nunes, the chair of the committee, stepped aside from the investigation following accusations that he had grown too close the Trump White House and was no longer objective. The head of the committee’s investigation is now Texas Republican Representative Mike Conaway. Recently, the House Intelligence Committee agreed on a list of 30 witnesses to interview, but these interviews have not yet taken place.

Finally, a fourth investigation is currently underway in the House Oversight Committee. The most recent update from them came at the end of April, when the committee revealed that Michael Flynn did not disclose foreign payments from Russia in paperwork for his security clearance.

All four investigations are currently unfolding on Capitol Hill. However, we probably shouldn’t expect them to reach any conclusions anytime soon. According to CNN, a number of House and Senate lawmakers have said that the investigations will continue into the fall and maybe even into 2018.