The suspect in the Manila casino attack that left more than three dozen dead has been identified as Jessie Carlos, a gambling addict who was drowning in a mountain of debt.

Carlos was named as the troubled, gambling indebted former government worker who strode into the Resorts World Manila and started shooting gambling machines and torching the casino.

Carlos had lost almost everything – his job, his wife, his car – when he decided to steal millions of dollars in poker chips and set the casino tables that had destroyed his life ablaze. The rampage was captured in great detail on surveillance video you can watch below.

Witnesses described a horrific scene in which casino guests and employees frantically tried to hide and smash windows to escape the smoke. Tragically, 37 of them did not make it out alive.

1. Carlos Was a Former Government Tax Specialist With Gambling Debts

Authorities said that Carlos had worked for the government’s Finance Department and accrued gambling debts. They believe that he was motivated by money problems and a gambling addiction, not terrorism.

Police revealed that Carlos worked as a tax specialist and was fired from an agency known as the One Stop Shop Tax Credit and Duty Drawback Centre. According to CNN Philippines, Jessie Carlos “was sued by the DoF in 2011 for unexplained wealth, Ombudsman rejected his motion for reconsideration in 2014.”

Here’s another photo of him:

Police gave those details out in a news conference on June 3 in which they revealed Carlos’ name and held a photo of him aloft. Carlos was “heavily indebted due to being hooked in casino gambling,” Chief Superintendent Oscar Albayalde told the news media.

Jessie Carlos was described as age 42 or 43 (accounts on that differed), a Filipino, separated, and a former Finance Department employee.

Police said he had been barred from all casinos and painted a picture of a man whose life was spiraling out of control even before he walked back through the casino door. 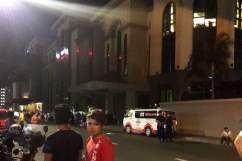 2. The Gunman Strode Into the Casino With an Assault Rifle & Set Fires in a Scene Captured on Video

The CCTV footage released by authorities showed the gunman setting gambling tables ablaze as he moved throughout the resort. CNN reported that most of the dead were found in the casino’s VIP room.

The videos show a painstakingly methodical attack as the shooter gets out of a taxi and strolls calmly inside the casino. “Shortly afterward, he dons a black ski mask, slips on an ammunition vest and pulls an M4 carbine assault rifle out of his backpack,” reports Bloomberg.

The gunman “appears to walk much of the way — even as he exchanges fire with a security guard and flees, slightly wounded, up a stairwell,” according to Bloomberg.

Here’s another view of the surveillance footage of the gunman.

Amateur video from the scene captured the chaos as people fled the casino in terror during the rampage.

According to CNN, the gunman shot gambling machines and then set the casino tables on fire.

CNN reported that the attacker left behind children as well as an estranged wife.

3. Carlos Killed Himself in the Resort & His Parents Have Begged the Public for Forgiveness

Most of the people who perished in the casino attack died from smoke inhalation after they hid from Carlos, according to ABC News. Other victims perished from suffocation. Police don’t think that Carlos went to the casino to shoot at people because the victims didn’t die that way; rather, at one point, he shot toward the ceiling.

Resorts World said that the dead included at least 22 guests at the casino and 13 employees. Most of those who died were women. Bloomberg reported that some patrons leapt from windows because they feared a terrorist attack was unfolding.

Carlos’ mother and father joined authorities at the June 3 press conference to request forgiveness for their son’s actions. According to Bloomberg, Carlos’ mother, Teodora, wept as she said, “We’re asking for your apology. We can’t accept ourselves that my son became like this, he was a very kind son. He chose to end his life than kill and kill people. The message of what happened to my son is people should not get hooked on gambling so their families won’t get destroyed.”

Carlos’ wife had recognized him from the surveillance footage that was released but was afraid, reported CNN.

ABC reported that the attack at the Resorts World Manila complex left at least 37 patrons and employees dead, “mostly from smoke inhalation while they hid, while the gunman fled to an adjoining hotel and reportedly killed himself.”

Confusion and contradictory accounts of a deadly episode in Manila hotel-casino fuel more fears in a nation on edge https://t.co/MDqgD60Nw9 pic.twitter.com/GWonabugp7

Carlos killed himself in a hotel room in the resort and set himself on fire, police said previously. His body was so badly burned that he was not recognizable, Al-Jazeera reported. The news site reported that security personnel had wounded Carlos, and he then holed up in a hotel room, where he shot himself in the head.

4. The Attacker Tried to Steal Millions in Poker Chips & Sold His Ford Ranger Because of His Debts

According to ABC News, Carlos tried to make away with $2 million in poker chips. He’s seen in the videos grabbing the chips off shelves.

His gambling problem “became the cause of misunderstanding with his wife and parents,” police said, according to the news site, which added that the “gunman was banned in April from entering all casinos and had to sell his pickup truck, a Ford Ranger, because of his debts.”

According to CNN, Carlos’ family had requested the ban.

The president of the Philippines referred to the attacker as “crazy,” according to The Associated Press.

5. ISIS Claimed Responsibility for the Attack, but the Government Doesn’t Think the Attack Was Terrorism

Although the Islamic State was quick to claim responsibility for the casino resort attack, authorities in the Philippines do not believe that Carlos was influenced by ISIS. Police said the released surveillance video footage proves the rampage was a robbery, not terrorism.

According to CNN, ISIS claimed that Islamic state “fighters” had perpetrated the attack.

However, the government doesn’t believe that is really the case; officials have characterized Carlos as a lone wolf attacker motivated by personal problems, primarily his gambling debts. Authorities reiterated that belief at the June 3 news conference.

Police officials said that Carlos’ family agrees with the government’s position that Carlos was not motivated by terrorism.

ISIS does have a presence in the Philippines. Armed ISIS affiliated groups are engaged in fighting in the city of Marawi, Al-Jazeera reports. 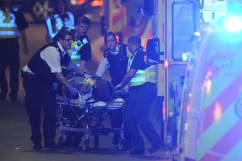 Read More
5 Fast Facts, Breaking News, Crime, Philippines
Jessie Carlos has been identified as the suspect in the Manila casino attack in the Philippines that left 37 people dead.