Valerie Castile, the mother of the late Philando Castile, who was shot to death by a Minnesota police officer during a traffic stop on July 2016, is “mad as hell” over the jury’s not guilty verdict in the trial of the officer.

The aftermath of Castile’s shooting death – by Officer Jeronimo Yanez in July 2016 – was streamed on Facebook Live video by his girlfriend to a shocked nation. Now, with the jury delivering an acquittal, Valerie took to the same forum – Facebook – to express her anger, even saying she hoped the officer died.

Yanez shot Castile, a school cafeteria worker with no serious record, after a traffic stop. Castile had a weapon, but he was legally permitted to carry it and told Yanez as much; the officer claimed Castile made a movement toward the gun after he told him not do do so, which prosecutors contested. The Castile shooting was the focal point of tensions between police and protesters last summer, and it was cited as a motive in the ambush-style murders of police officers in other cities.

1. Valerie Castile Is “Mad as Hell” Over the Officer Being Found Not Guilty & Is Preserving Her Son’s Legacy

After the court cleared Jeronimo Yanez of a manslaughter charge as well as two lesser charges on Friday, June 16, Valerie yelled an expletive and left the courtroom before it was formally dismissed as family and friends were in tears.

The system continues to fail black people, and it will continue to fail you all. Like I said, because this happened with Philando, when they get done with us, they coming for you, for you, for you and all your interracial children. Y’all are next, and you will be standing up here fighting for justice just as well as I am.

People have died for us to have these rights and now we’re devolving. We’re going back down to 1969. Damn. What is it going to take? I’m mad as hell right now, yes I am.

She has frequently turned to the television cameras to make an impact after her son died.

Valerie Castile reflects on son Philando Castile's legacy at dedication at J.J. Hill ElementaryOn November 20, 2016, the Castillo family came together in solidarity to continue the legacy of Philando Castile and the fight for equal protection under the law. Video shot by Phil McGraw of Brown Eye Lens More here: http://spokesman-recorder.com/2016/11/21/philando-castile-honored-memorial-j-j-hill/2016-11-21T23:56:15.000Z

Valerie Castile has been heavily involved in efforts to preserve her son’s legacy. She’s working with the St. Paul Foundation to create a permanent memorial for Philando’s peace garden.

She also collaborated with the Minnesota Institution of Art to have an exhibition of art honoring Philando.

She had to see photos of Philando after the shooting during the trial.

Valerie was originally from St. Louis but moved to Minneapolis, Minnesota.

2. People Have Taken to the Streets to Express Their Disappointment Over the Verdict

A couple hold a sign protesting the killing of Philando Castile outside the Governor’s Mansion on July 7, 2016 in St. Paul, Minnesota. Castile was shot and killed the previous night by a police officer in Falcon Heights, MN. (Getty)

Valerie isn’t the only one who is upset. Thousands gathered at the state Capitol in St. Paul later that day to protest the decision. The hour long rally was followed by a march through the streets of St. Paul. The around 2,000 people were escorted by police as they marched. During the peaceful demonstration, speakers led chants, sang hymns, and urged protesters not to lose hope. Some of the signs protesters were holding said “this hurts” and “Justice not served for Philando.”

Five hundred protesters splintered from the group and blocked the entrance ramp to Interstate 94. The freeway was shut down in both directions. 18 of those protesters were arrested after they failed to comply with orders to disperse.

People have been protesting since the shooting happened. A roadside memorial was erected at the spot Philando was shot in Falcon Heights, Minnesota at the traffic stop at Larpenteur Avenue and Fry Street after the shooting happened. The spot received extra visits on the day of the court decision. One of the people there was Theresa St. Aoro, who brought flowers to the spot.

“I was stunned, just stunned,” St. Aoro told CNN. “I don’t think that this was a fair jury. It took so long when they couldn’t decide. Did they just say, ‘Oh, it’s Friday and I want to go home?’ This was not justice at all.”

Valerie took to Facebook to further express her anger in a live video. During the video, she said “f*ck the police.” She also criticized the jurors at the court case as well as Yanez, and she hopes that the “motherf*cker” dies tonight.

Yeah, I’m going live now. I been holding myself, trying to be strong, and not say the wrong things because I already know how they get down.

I’m 61 years old. I’ve seen it; I’ve smelled it; I’ve heard it. Now you see exactly what these motherf*ckers think about us. They murdered my motherf*cking son with his seat belt on. So what does that say to you? Now they got free reign to keep killing us any kind of way they want to.

So I just want to say one thing to everybody out there: I don’t give a f*ck what you do! Do what your heart desires because that sh*t wasn’t right! And I’m here to say that and f*ck the police! Say whatever the f*ck you want to say!

Now this is the real Valerie Castile! I don’t give no f*ck no more! This shit is crazy!

I hope that motherf*cker die tonight!

Here are some of the comments from the video:

Valerie has another video that went live on her Facebook on June 12, where she explains that she’s at the courthouse so she can hear the verdict when it comes. She also called for people to stand in solidarity.

Valerie’s Facebook page has many photos of Philando as well as Allysza.

She also took to Facebook to say that President Donald Trump and his family are “pimping the shit out of this country.”

She has multiple posts criticizing Trump. 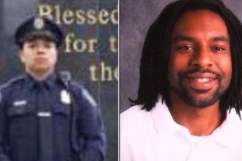 4. Philando Castile Was Shot & Killed By the Officer Last Year

Philando Castile, the Minnesota man shot by the police on July 7, 2016. His girlfriend captured the immediate aftermath on Facebook Live, as he was bleeding in a car. (Facebook/Philando Castile)

The shooting of 32-year-old Philando on July 6, 2016 was captured by his girlfriend, Diamond Reynolds, and broadcast on Facebook Live. Philando bleeds through a white T-shirt as the officer points a gun through the car and Reynolds’ 4-year-old daughter cries in the back seat.

Philando only has a minor criminal history in Minnesota with mostly traffic violations and no violent criminal record.

Philando Castile's mom Valerie: "He lived by the law & died by the law." #FalconHeights pic.twitter.com/sgs7bdYFlG

Valerie told a WCCO – CBS Minnesota reporter that “he lived by the law, and he died by the law.” Philando’s cousin, Antonio Johnson, 31, told the StarTribune that Philando was a straight-A honors student from St. Paul Central High School and was “very nonconfrontational.”

Philando worked as a cafeteria supervisor at J.J. Hill Montessori School in St. Paul. A statement from the school system said that was a cheerful team player who maintained relationships with staff and students alike. He was also quick to greet coworkers with a smile and a hug.

One coworker said, “Kids loved him. He was smart, over-qualified. He was quiet, respectful, and kind. I knew him as warm and funny; he called me his ‘wing man.’ He wore a shirt and tie to his supervisor interview and said his goal was to one day ‘sit on the other side of this table.’”

A parent of a child who attended the school wrote on Facebook that he sneaked extra graham crackers to students and hugged her borderline autistic child every day. “This was a GOOD MAN,” she wrote.

The St. Anthony Police Department officers at the shooting were identified as Jeronimo Yanez and Joseph Kauser, with Yanez firing the shots. Yanez was charged with felony manslaughter in the shooting on November 16, 2016.

Reynolds said that they were stopped for a broken taillight they didn’t really have. What may be a police dispatch audio/scanner traffic obtained by Minnesota television station KARE11 has a man purported to be the officer saying that they were going to stop the car because “the two occupants just look like people that were involved in a robbery. The driver looks more like one of our suspects, just ’cause of the wide set nose.”

Yanez’s attourney, Tom Kelly, confirmed the details in the audio saying that, “They had a reasonable suspicion he may match the description of the suspect in the earlier robbery.” He also said that Philando wasn’t a robbery suspect and that the car had a brake light out. He also said that the robbery refers to a July 2, 2016 gas station robbery near Lauderdale. Philando Castile was not that robbery suspect, however.

Philando was carrying a firearm at the time but told Yanez that he had a permit to carry it, which was true. Yanez argued that Philando Castile made a sudden move for the weapon. However, prosecutors challenged whether Yanez ever saw the gun before shooting. The officer was in a heightened state as he was looking for a robbery suspect who was not Philando.

The jury was made up of seven men and five women and they reached the verdict after 30 hours of deliberations over five days. There were two people of color on the jury.

“This was very, very difficult for all of us,” Juror Dennis Ploussard told the StarTribune.