Getty Marc Kasowitz, the personal attorney for President Donald Trump, departs after speaking at an event June 8 in Washington, DC.

One day after a news report accused Donald Trump‘s lawyer Marc E. Kasowitz is having difficulty obtaining a security clearance because of a history of alcohol abuse, the attorney fired back at a stranger in a strand of emails.

According to a report by ProPublica, a man who wished to remain anonymous, forwarded email conversations between him and Kasowitz. In one of the emails, Kasowitz writes “You are f***ing with me now Let’s see who you are Watch your back, b****.”

Other emails include other various threats from Kasowitz to the man, who told the news outlet that he’s a retired public relations professional.

An attempt to reach Kasowitz’s spokesman — Michael Sitrick — by ProPublica for comment was unsuccessful prior to the story being published.

Read the full string of emails, which the publication said have been authenticated, below:

9/ The man sent a polite email back to Kasowitz: pic.twitter.com/iLXAocfWPl

10/ But Kasowitz continued to harangue him: pic.twitter.com/OHI2eF2ZKj

11/ And then, Kasowitz, the man representing the President of the United States, replied again: pic.twitter.com/hBqqnNAcVO

The man told the publication that he forwarded the exchange to the F.B.I. so there was written record in case Kasowitz followed through on the threat.

According to the article, the man sent Kasowitz an email encouraging him to resign after MSNBC’s Rachel Maddow spoke about a story published earlier in the day by ProPublica saying that Kasowitz isn’t looking for a security clearance because of a history of alcohol abuse. Former employees that worked for Kasowitz told the news outlet that he has a history of alcohol abuse and “had engaged in behavior that made them uncomfortable.”

Once the story was published online, Sitrick released a statement disputing the story.

Marc Kasowitz has not struggled with alcoholism. He has not come into the office intoxicated, attorneys have not had to go across the street to the restaurant during the workday to consult Kasowitz on work matters.

The rigorous background investigation that goes into getting security clearance also considers “any information relevant to strength of character, honesty, discretion, sound judgment, (and) reliability. 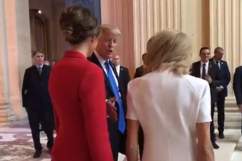 Read More
Donald Trump, Politics, US Politics
Donald Trump's lawyer Marc Kaowitz fired back at a stranger with a strand of emails, telling the man to "watch his back," a report says. Read the full emails.