Rob Goldstone, the man who says he connected Donald Trump Jr. with a Russian lawyer who claimed to have damaging information about Hillary Clinton, is a British-born music producer with ties to a Russian billionaire through his pop star son.

Trump Jr. confirmed in a statement that he and other Trump campaign officials met with Natalia Veselnitskaya in June 2016. The president’s son on July 11 released an email chain between himself and Goldstone that raised further questions about the meeting.

In one email, Goldstone, the British-born music producer facilitating the meeting, wrote, “This is obviously very high level and sensitive information but is part of Russia and its government’s support for Mr. Trump…” Trump Jr. responded, “If it’s what you say, I love it.”

The person who asked Trump Jr. to attend the meeting was Goldstone, a music producer with ties to a Russian pop star named Emin Agalarov, according to The Washington Post.

A special prosecutor is investigating whether members of the Trump campaign colluded with Russian interference into the 2016 presidential election. Goldstone is a colorful addition to the cast of characters in the Trump/Russia controversies.

1. The Emails Reveal Goldstone Told Trump Jr. That Veselnitskaya Was a Government Lawyer With Information Damaging to Hillary Clinton

In the statement that he released on the meeting, Trump Jr. did not name the intermediary. However, Rob Goldstone told The Washington Post that “he had arranged the meeting at request of a Russian client and had attended it along with Veselnitskaya.”

He initially wouldn’t identify the Russian client, according to The Post, but he said that Veselnitskaya wanted to speak with Trump Jr. about Russian adoptions.

Goldstone later released a statement, in which he alleged Veselnitskaya had said she had information about illegal campaign contributions to the DNC. He has now identified the “client” as Russian pop star Emin Agalarov.

The New York Times is now reporting that Goldstone allegedly sent an email to Trump Jr. before the meeting informing him “that the material was part of a Russian government effort to aid his father’s candidacy.”

Trump Jr. then released all of the emails himself. On June 3, in one key exchange, Goldstone wrote, “Good morning. Emin just called and asked me to contact you with something very interesting. The Crown prosecutor of Russia met with his father Aras this morning and in their meeting offered to provide the Trump campaign with some official documents and information that would incriminate Hillary and her dealings with Russia and would be very useful to your father. This is obviously very high level and sensitive information but is part of Russia and its government’s support for Mr. Trump – helped along by Aras and Emin. What do you think is the best way to handle this information and would you be able to speak to Emin about it directly?”

In his own statement, Donald Trump Jr. wrote that he was “asked to have a meeting by an acquaintance I knew from the 2013 Miss Universe pageant with an individual who I was told might have information helpful to the campaign.” The Times reported that Trump Jr. accused the lawyer of being a “Kremlin proxy.”

Trump Jr. also says in the statement that he was told that Veselnitskaya “had information that individuals connected to Russia were funding the Democratic National Committee and supporting Mrs. Clinton.”

You can release the Trump Jr. emails with Goldstone here: 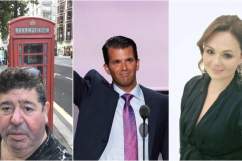 2. Goldstone Works With a Russian Pop Star Whose Father Is a Wealthy Developer in Moscow

According to The Post, Goldstone “works as a manager for Emin Agalarov, a Russian pop star whose father is a wealthy Moscow developer who sponsored the pageant in the Russian capital in 2013.”

Trump was featured in a music video with Emin Agalarov.

Emin’s father is Aras Agalarov, a Russian billionaire. Forbes says Aras is worth almost $2 billion, a fortune he made from real estate, and added that he brought the Miss Universe pageant to Moscow. According to Bloomberg, “The last time Donald Trump made an appearance in Moscow was November 2013 for the Miss Universe contest he famously owned.”

According to The New York Times, “The elder Agalarov boasts close ties to Mr. Putin: his company has won several large state building contracts, and Mr. Putin awarded him the “Order of Honor of the Russian Federation.”

The son has boasted of the family’s ties to Trump.

Ermin Agalarov told Forbes in an interview that “he and his billionaire developer father, Aras, had plans to build a Trump Tower in Russia that would now likely be under construction had Trump not run for office; that he has maintained contact with the Trump family since the election, and has exchanged messages with Donald Trump Jr. as recently as January; and that President Trump himself sent a handwritten note to the Agalarovs in November after they congratulated him on his victory.”

Politico has called Aras Agalarov “a billionaire Russian real estate mogul with ties to Putin,” and described Emin as “a dance-pop singer with ambitions to international stardom who got Trump to appear in one of his music videos.”

Bloomberg reported that, while Trump was in Moscow, he was invited to meet with “more than a dozen of Russia’s top businessmen, including Herman Gref, the chief executive officer of state-controlled Sberbank PJSC, Russia’s biggest bank.” Gref, “who was President Vladimir Putin’s economy minister from 2000 to 2007, organized the meeting together with Aras Agalarov, the founder of Crocus Group, one of the country’s largest real-estate companies, which was hosting the beauty pageant at one of its concert halls,” reported Bloomberg. 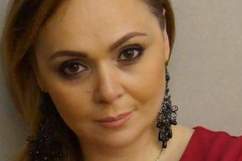 3. Goldstone Is a Former Journalist From the UK & Has Represented Many Famous Clients

Goldstone got his start in journalism and runs a PR firm. He has a penchant for profane and colorful hats that he displays frequently on social media.

“Born in the United Kingdom, Rob studied as a journalist and by his early 20’s worked for daily newspapers and radio stations. In 1985, The Band Aid Relief Fund invited Rob to accompany Bob Geldof to Ethiopia.”

The New York Times referred to Goldstone as a former “tabloid journalist,” writing that he is “a former British tabloid journalist and the president of a company called Oui 2 Entertainment who has worked with the Miss Universe pageant.”

The bio continues, “In 1986, Rob moved to Australia, first as a journalist – as the only journalist chosen by Michael Jackson to accompany him on his tour “down under” – and later as a publicist and co-president of his own PR company, Crawford Goldstone Publicity. For six years, Sydney-based Rob represented almost every major international artist touring Australia; from Cyndi Lauper to Julio Iglesias, James Taylor, Tracy Chapman, BB King, Marianne Faithful and Poison! Among his corporate clients were Saatchi and Saatchi, The Hard Rock Cafe, Chess: The Musical, Richard Branson’s Virgin Megastores, and HMV Music Stores.”

The Oui 2 company bio for Goldstone says he founded Oui 2 Entertainment with David Wilson in 1998.

“Manhattan-based Oui 2 and has since gone on to represent some of the biggest music brands and entertainment events in the country, including a decade relationship with EMI Music Publishing (then the world’s largest music publisher), Best Buy (handling their PR and creating events to introduce them into New York and San Francisco including Sting in Central Park), The Friars Club (handling media for their Roasts and tributes),” the bio says.

4. Goldstone Was in Moscow Two Weeks Before the Meeting

Goldstone has since privatized his Instagram account, but a July 27, 2016 post read, “It’s the last full day in Russia today and it’s been a 3 week whirlwind between Baku, St. Petersburg and Moscow.”

Trump Jr. associate Rob Goldstone was in Moscow less than 2 weeks before the June 9 meeting at Trump Tower, then went back for most of July: pic.twitter.com/GxLRiDwK9I

He also posted from Red Square in May 2016. He visited Russia in July and May 2016, according to various social media posts he made.

Goldstone has written about Hillary Clinton on social media.

He didn’t hide the Trump meeting – he checked in at Trump Tower on Facebook on the day in question.

On June 23, 2016, Goldstone wrote on Facebook, “To my friends who doubt Donald Trump will ever be President – they also thought Britain would never vote to leave the EU and as I go bed, it looks like the UK has voted to leave the European Union. I rest my case.”

On Facebook, Goldstone says that he is single, lives in New York, New York, and is from Manchester, United Kingdom. His most recent public Facebook posts show travels to Greece, Croatia, and Italy.

5. Trump Jr. Admits Meeting With Veselnitskaya but Says She Had ‘No Meaningful Information’

According to a statement released by Trump Jr., he was not told the lawyer’s name before the meeting and asked Jared Kushner and Paul Manafort to attend “but told them nothing of the substance.”

The meeting occurred in June 2016, and Veselnitskaya “stated that she had information that individuals connected to Russia were funding the Democratic National Committee and supporting Ms. Clinton. Her statements were vague, ambiguous and made no sense.”

JUST IN: Donald Trump Jr. responds to reports that he met with Kremlin-linked lawyer during campaign pic.twitter.com/5mqRX38Wio

She didn’t provide details or supporting information and “it quickly became clear that she had no meaningful information. She then changed subjects and began discussing the adoption of Russian children and mentioned the Magnitsky Act.”

Trump Jr. said it became clear to him that “this was the true agenda all along and that the claims of potentially helpful information were a pretext for the meeting.”

Trump Jr. released another statement on July 11. It reads,

To everyone, in order to be totally transparent, I am releasing the entire email chain of my emails with Rob Goldstone about the meeting on June 9, 2016. The first email on June 3, 2016 was from Rob, who was relating a request from Emin, a person I knew from the 2013 Ms. Universe Pageant near Moscow. Emin and his father have a very highly respected company in Moscow. The information they suggested they had about Hillary Clinton I thought was Political Opposition Research. I first wanted to just have a phone call but when that didn’t work out, they said the woman would be in New York and asked if I would meet. I decided to take the meeting. The woman, as she has said publicly, was not a government official. And, as we have said, she had no information to provide and wanted to talk about adoption policy and the Magnitsky Act. To put this in context, this occurred before the current Russian fever was in vogue. As Rob Goldstone said just today in the press, the entire meeting was the “most inane nonsense I ever heard. And I was actually agitated by it.”

Trump Jr. originally said only that the meeting dealt with adoptions, according to The New York Times.

In a statement, a spokesman for President Trump’s outside counsel said Veselnitskaya misrepresented herself and alluded to ties to Democrats.

“We have learned from both our own investigation and public reports that the participants in the meeting misrepresented who they were and who they worked for,” Mark Corallo, spokesperson for Trump’s outside counsel, said in a statement. “Specifically, we have learned that the person who sought the meeting is associated with Fusion GPS, a firm which according to public reports, was retained by Democratic operatives to develop opposition research on the president and which commissioned the phony Steele dossier.”