Sean Spicer, who became a visible face of the Trump administration, has resigned as press secretary, reportedly over the new hiring of Anthony Scaramucci, and is leaving the White House, ending a tumultuous time at the podium.

Spicer’s resignation is not a complete surprise because there had been signs that his influence was waning in recent weeks, with Sarah Huckabee Sanders often conducting news briefings, sometimes off camera, and new reports that Anthony Scaramucci, a New York financier, would be named the White House Communications Director, which he was on July 21.

Sean Spicer is a wonderful person who took tremendous abuse from the Fake News Media – but his future is bright!

Still, Spicer was one of the Trump administration’s most well-known faces and names, and one of the most mocked, earning a place in the annals of Saturday Night Live parodies when Melissa McCarthy donned a suit and squirt gun to portray him.

Spicer tweeted about his resignation, saying it was an honor to serve and that he would remain in his post until August.

Scaramucci praised Spicer as a patriot in his first press briefing.

Behind the scenes, though, Spicer was said to be upset over the hiring of Scaramucci, a businessman with a background in hedge funds, and he was joined in that opposition by strategist Steve Bannon and Chief of Staff Reince Priebus, The New York Times reported, highlighting a potentially growing fissure between the political base activists in the White House and Trump’s family.

GettyAnthony Scaramucci during a conference in Switzerland in January 2017.

The AP also confirmed that Spicer had resigned and reported that it was because Trump went ahead with Scaramucci’s hiring. Trump’s decision to hire Scaramucci as communications directly happened quickly and caught Spicer and others by surprise, reported Politico, which said that Trump was chafing for months over what he felt were the failures of his communications team to combat negative television coverage.

The Times cited the Scaramucci news as pivotal in Spicer’s resignation. The Times reported that Trump offered Scaramucci the job at 10 a.m. on July 21, and the president “requested that Mr. Spicer stay on, but Mr. Spicer told Mr. Trump that he believed the appointment was a major mistake.” The Times based that report on an anonymous source.

Spicer told a Washington Post reporter that he believes he’s only in the middle chapter of his life:

Katy Tur, of NBC News, reported on Twitter, “Spicer was telling folks last night he would resign if Scaramucci was hired. Said he didn’t think Scaramucci could do the job. -source close.”

Publicly, though, all parties spoke positively about one another.

Scaramucci, in his first news briefing, spoke highly of Spicer, saying, “I hope he goes on to make a tremendous amount of money.” Sarah Huckabee Sanders joined Scaramucci in the briefing and read a statement from Trump that said the president appreciated Spicer’s service and believed he would be successful.

Spicer appeared on the Sean Hannity show later in the day. ““(Trump) wanted to bring some new folks in to help rev up the communications operation,” Spicer said during the interview. “After reflection, my decision was to recommend to the president that I give Anthony and Sarah a clean state to start from so that they can talk about the president’s’ agenda and help move it forward.

You can watch Spicer’s Hannity interview in full here: 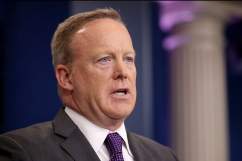 2. Spicer, Who Is Close to Reince Priebus, Was Reportedly Worried Scaramucci Would Turn the Office Into ‘Amateur Hour’

GettyFormer White House Press Secretary Sean Spicer will give an interview to Sean Hannity on July 21.

Scaramucci is cut from the same bolt of cloth as Trump. A brash New Yorker who speaks his mind, he’s a self-made billionaire who operates in the world of Manhattan finance. What he doesn’t have is experience as a political or media strategist, save for his appearances on cable news shows.

Spicer is an experienced political strategist from the GOP trenches, and reports say he was worried that Scaramucci won’t do well with the new job.

Spicer, who came from the Republican National Committee to the White House, was close to White House Chief of Staff Reince Priebus. The New York Times says that Priebus and strategist Steve Bannon joined Spicer in opposing Scaramucci’s selection, raising new questions about the longevity of Priebus in the Trump administration. Trump’s daughter Ivanka and her husband, Jared Kushner, supported the hire, The Times reported.

Spicer, of course, was immortalized in the ranks of Saturday Night Live caricature history when he was famously played by actress Melissa McCarthy in skits, in which “Spicey” squirted large water squirt guns at reporters and pushed the podium toward them.

(Photo by: Will Heath/NBC)

After that, his appearance before the television cameras gradually diminished, and Huckabee Sanders (the daughter of Mike Huckabee) often dealt with the press publicly, although all parties had denied that Spicer was being shoved aside. 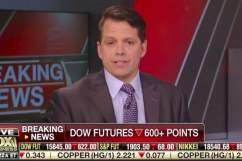 3. Spicer Organized Debates for the RNC & Scaramucci Has Already Apologized for Once Calling Trump a Hack

GettyWhite House press secretary Sean Spicer responds to questions during a briefing at the White House June 20, 2017 in Washington, DC.

During the 2016 presidential election, Spicer was the chief strategist and communications director of the Republican National Committee, which Priebus ran before moving over to the Trump administration.

Spicer started as communications director for the RNC in 2011, and he became chief strategist in 2015. Among other duties, Spicer organized all of the Republican presidential primary debates. Spicer worked in the George W. Bush administration from 2006 to 2008, with his formal title being assistant United States trade representative for media and public affairs.

Scaramucci is already dealing with tough questions about his past comments on Trump.

He said during the July 21 news briefing that he regrets comments he made in 2015 when he called Donald Trump a “hack politician.” Scaramucci said then that Trump might become president of the “Queens County Bullies Association,” adding that Trump needs to “stop all this crazy rhetoric…”

In his first White House press briefing, Scaramucci said he had already apologized to Trump for the comments. 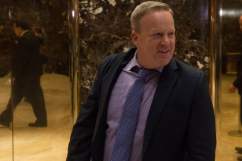 4. Scaramucci Worked at Goldman Sachs & Is a Financier Nicknamed ‘The Mooch’

Anthony Scaramucci was a senior adviser on Donald Trump’s transition team. After he finished law school, Scaramucci started his career at Goldman Sachs in 1989. He held positions in the company’s investment banking, equities, and private wealth management divisions. He left Goldman Sachs in 1996 to start Oscar Capital Management with Andrew Boszhardt. In 2005, Scaramucci founded SkyBridge Capital, a global alternative investment firm. He sold the company a few days before Trump’s inauguration in January.

Prior to joining Trump’s political campaign as a member of the Trump Finance Committee, Scaramucci endorsed Scott Walker and Jeb Bush in the 2016 election. Scaramucci is also an author of the books The Little Book of Hedge Funds, Goodbye Gordon Gekko: How to Find Your Fortune Without Losing Your Soul and Hopping Over the Rabbit Hole: How Entrepreneurs Turn Failure into Success.

“Nicknamed ‘the Mooch’ by reporters, he hosted a splashy annual conference in Las Vegas and was a frequent media presence,” reported The Atlantic of Scaramucci, who, at 53, is reportedly worth more than $1 billion.

Scaramucci was in the news recently when CNN retracted a story about him that led to three of the network’s journalists leaving the network.

5. Spicer Had Many Colorful Moments at the Presidential Podium

Spicer’s approach to handling the press was notoriously combative, a trait that McCarthy built into her skewering of him. He also had some gaffes at the podium. Spicer stepped in it when he said in a press briefing that Adolf Hitler didn’t use chemical weapons during World War II, forgetting that Hitler sent millions of Jews to gas chambers during the Holocaust. He was mocked for calling concentration camps and gas chambers “Holocaust centers.”

There were reports that Spicer’s job might be on the line after what some felt was the bizarre way in which he handled questions in the wake of James Comey’s firing and with Donald Trump said to be unhappy that his message was not getting out.

Spicer’s resignation also comes in a time of continued tumult for the Trump administration, which is battling against the continued drumbeat of Russian allegations.

This post will be updated as more information is learned about Spicer’s resignation.

You can read more about Anthony Scaramucci here: