Getty In this photo provided by the German Government Press Office (BPA) Donald Trump, President of the USA (left), meets Vladimir Putin, President of Russia (right), at the opening of the G20 summit on July 7, 2017 in Hamburg, Germany.

U.S. President Donald Trump met and shook hands with Russian President Vladimir Putin in a much anticipated meeting at the G20 in Hamburg.

Trump and Putin were captured in several photos that documented the historic handshake and meeting between Trump and Putin, the latter of whom has been accused of interfering in the 2016 presidential election. Here’s a slightly longer view of the Trump/Putin handshake:

Trump and Putin meet in Hamburg.

CNN described the moment: “Trump extends his hand and a smiling Putin takes it. Trump pats the Russian president’s arm with his left hand during the greeting.”

The two men chatted briefly around a small table.

In this photo provided by the German Government Press Office (BPA), Donald Trump, President of the USA (C) meets Vladimir Putin, President of Russia during the G20 Summit on July 7, 2017 in Hamburg, Germany.

Here’s another view of that:

Trump and Putin later met for a longer time later in the day on July 7. They were also photographed together in the group shot of G20 leaders. According to The New York Times, Trump said, “It’s an honor to be with you,” to which Putin replied, “I’m delighted to meet you.” Both men spoke positively about the meeting, the Times reported, but specifics of their discussions were not revealed.

Here’s the more formal meeting, where another handshake occurred:

GettyUS President Donald Trump and Russia’s President Vladimir Putin shake hands during a meeting on the sidelines of the G20 Summit in Hamburg, Germany, on July 7, 2017.

The two men spoke on the sidelines of the summit.

Trump and Putin meeting in Hamburg,

The summit brought together the world’s economic powerhouses in Hamburg, Germany to deal with some of the thorniest issues throughout the globe, ranging from climate change to African economies. Trump tweeted about the anticipated meeting, writing, “I look forward to all meetings today with world leaders, including my meeting with Vladimir Putin. Much to discuss.#G20Summit #USA.”

Getty International leaders attend the group photo on the first day of the G20 economic summit on July 7, 2017 in Hamburg, Germany. The G20 group of nations are meeting July 7-8 and major topics will include climate change and migration.

Here are some other vantange points of the moment between Trump and Putin.

Grins, handshakes at first encounter between Trump and Putinhttps://t.co/1996SgSzx8

Some Trump supporters were happy about the meeting.

Trump critics were also out in full force.

Putin and Merkel shake hands at the G20.

Putin also was pictured with other world leaders, such as the presidents of South Africa and Mexico.

President Trump arrived in Hamburg from Poland, where he gave a speech on the need to defend western values. You can see a video of the Trump/Putin handshake here: 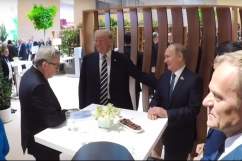