A second home has sunk into a sinkhole in Land O’ Lakes, Florida and it was caught on camera. Surrounding homes have also been evacuated as a safety precaution. The Pasco County Sheriff’s Office has also tweeted asking motorists to stay away from the area.

PHOTO FROM GOOGLE MAPS from before #sinkhole in Land O' Lakes, and a photo from the scene right now. https://t.co/XqyyeDhrfU @abcactionnews pic.twitter.com/gV167SLD5q

The Sheriff’s Office told ABC Action News that the depression started out this morning “the size of a small pool” but has since grown. It’s ability to wreak destruction can be seen in the above video and photo.

The region affected is a peninsula on a lake.

Sinkholes have previously been a problem in the city, when ground gave way under a house in a subdivision in 2013, reports the Tampa Bay Times.

According to NASA, “Sinkholes are depressions in the ground formed when Earth surface layers collapse into caverns below. They usually form without warning.”

Beyond the Tampa Bay Area, Florida is notorious for the natural disasters. According to the Florida Office of Insurance Regulation, Florida has more sinkholes than any other state in the U.S. The Atlantic reports that new technology is being developed to aid in sinkhole detection.

Ronald Blom, a geologist with the Jet Propulsion Laboratory, told the Atlantic about Interferometric Synthetic Aperture Radar (InSAR), which uses drones and satellites to detect changes in ground elevation. “InSAR is not a magic bullet, but it could be a useful tool as part of a more complete observational scheme.” 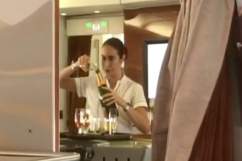 Read More
Florida, Weather, Youtube
wpDiscuz
1
0
Would love your thoughts, please comment.x
()
x
| Reply
A second home has sunk into a sinkhole in Land O' Lakes, Florida and it was caught on camera. Surrounding homes have also been evacuated as a safety precaution.