The Fox & Friends tweet links to a Fox News interview with Trump from Bedminster, New Jersey, where Trump spent the first part of his August vacation. Trump confirmed that he is considering pardoning Arpaio, the former Arizona sheriff who supported Trump during the election. The 85-year-old Arpaio is best known for refusing to comply with a judge’s order to stop his anti-immigration patrols. He was convicted on a misdemeanor contempt of court charge.

“I am seriously considering a pardon for Sheriff Arpaio,” Trump told Fox News on Sunday. “He has done a lot in the fight against illegal immigration. He’s a great American patriot and I hate to see what has happened to him.”

Arpaio’s sentencing isn’t until October 5 and he could be sentenced to six months in jail. Arpaio was the sheriff of Maricopa County and gained a reputation as “America’s toughest sheriff.” He also ran an investigation into the validity of President Barack Obama’s birth certificate, pushing the birther conspiracy. He lost re-election in November 2016.

“Is there anyone in local law enforcement who has done more to crack down on illegal immigration than Sheriff Joe?” Trump told Fox News. “He has protected people from crimes and saved lives. He doesn’t deserve to be treated this way.”

On Tuesday morning, Trump also tweeted another endorsement of Alabama Senator Luther Strange, who was on Fox & Friends.

Senator Luther Strange, who is doing a great job for the people of Alabama, will be on @foxandfriends at 7:15. Tough on crime, borders etc.

In another tweet, Trump wrote, “According to report just out, President Obama knew about Russian interference 3 years ago but he didn’t want to anger Russia!” Although he didn’t link to it, he was referring to a Politico report that the Obama administration was warned by national security officials “multiple” times between 2014 and 2016 that Russia was “ramping up” its intelligence operations to interfere in the U.S. Politico cited several current and former officials.

According to report just out, President Obama knew about Russian interference 3 years ago but he didn't want to anger Russia!

As for Arpaio, he has maintained his innocence. He even told Fox News, “I would accept the pardon because I am 100 percent not guilty.”

Trump arrived at Trump Tower in New York on Monday night. It’s the first time he’s been there since taking office. Earlier in the day, Trump finally condemned white supremacists, the KKK and neo-Nazis during a speech two days after the death of Heather Heyer and two police officers during the violence in Charlottesville, Virginia.

Made additional remarks on Charlottesville and realize once again that the #Fake News Media will never be satisfied…truly bad people! 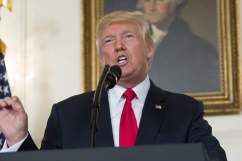