President Donald Trump‘s son, Eric, claimed Friday that his tweets are being.

Eric, the 33-year-old third child of the president, sent out two screenshots showing a tweet he sent earlier in the day. The tweet quoted a July jobs report from Drudge Report and said “Jobs Jobs Jobs!!!”

However, when Eric viewed the tweet a second time two hours later, he said the tweet was labeled as containing “potentially sensitive content,” thus making it difficult for other users to see it.

Eric tagged Twitter in his accusation, asking, “Why are my tweets about jobs and the economy being censored?”

.@Twitter – Why are my tweets about jobs and the economy being censored? #Interesting pic.twitter.com/QSdcj7MjVR

Twitter’s media policy asks users to change their media settings and “appropriately” mark if they “intend to regularly post” potentially sensitive content, such as questionable images or language.

“If one of your Tweets containing media is reported as sensitive, it will be sent to Twitter for review,” the policy says.

Like his father and brother, Donald Jr., Eric regularly uses the social media platform to tout accomplishments and voice his opinions.

In July, Eric notably got into a Twitter fight with Keith Olbermann when the political commentator criticized Eric’s role in the Trump Organization.

It started with Kellyanne Conway responding to a tweet that accused the Clinton Foundation of peddling money, and blew up from there.

That would be something.

Especially if some of those countries repress girls & women. https://t.co/E7LtKjfwuH

Olbermann responded to Conway’s tweet by accusing Eric of taking money from the organization to fund his play in golf tournaments.

I understand your confusion. You're thinking of @EricTrump self-dealing charity cash to himself from golf tournaments. https://t.co/VbymSdWF9G

That set off Eric, who fired back with a tweet critical of Olbermann, saying he’s raised millions of dollars for “dying children” and asked him what he’s accomplished.

You mean the $16.3 million dollars I have raised for dying children (before the age of 33) at a 12% expense ratio. What good have you done? https://t.co/g5fTWLY6OY

That wasn’t the end of it, as Olbermann picked up things the next morning with a string of tweets containing news stories about Eric’s dealings with the Trump Organization.

So 12% is what you skimmed/self-dealt back to Trump Org, Sonny? The $1m+ I've donated to St Jude's, Make-A-Wish etc came out of my pocket https://t.co/vya3gwHY1H

Remind everybody again which one of us was taking $1.2m in charity as "payment" for a family golf course? https://t.co/3m7X8o0g7F https://t.co/vya3gwHY1H

Lastly, Kid when we put you, your disloyal bro @DonaldJTrumpJr and treasonous @realDonaldTrump in prison we will all have done GREAT good https://t.co/vya3gwHY1H

Eric had no response to Olbermann and blocked him following the incident.

Eric serves as a trustee of the Trump Organization and has been married to Lara Yunaska since November 2014. In March, it was reported that Lara was pregnant with the couple’s first child. 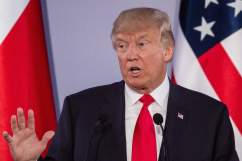