President Donald Trump announced a briefing for today on the subject of the nation’s opioid crisis. Trump announced the briefing on his Twitter account. The briefing started after 3:00 p.m. ET from his property in Bedminster, New Jersey, where the president is on a 17-day “working” vacation.

Trump tweeted an announcement of the speech just after he retweeted a Fox & Friends report on the crisis. In the report, Fox News cited a new study from the University of Virginia that shows deaths from opioid overdoses might have been underreported.

“Nationally, corrected opioid and heroin involved mortality rates were 24% and 22% greater than reported rates,” the study’s introduction reads. “The differences varied across states, with particularly large effects in Pennsylvania, Indiana, and Louisiana. Growth in corrected opioid mortality rates, from 2008 to 2014, were virtually the same as reported increases (2.5 deaths per 100,000 people) whereas changes in corrected heroin death rates exceeded reported increases (2.7 vs 2.3 per 100,000).”

Activists have called on the Trump Administration to finally do more to combat the crisis. Although he established the President’s Commission on Combating Drug Addiction and the Opioid Crisis, with New Jersey Governor Chris Christie leading it, he has yet to follow the commission’s recommendation that he declare the crisis a national emergency, The Washington Post notes.

“The first and most urgent recommendation of this Commission is direct and completely within your control. Declare a national emergency under either the Public Health Service Act or the Stafford Act. With approximately 142 Americans dying every day, America is enduring a death toll equal to September 11th every three weeks,” the Commission’s first report, published on July 31, reads.

Trump also won counties impacted the most by opioid addiction. The Penn State found in December study that Trump “over-performed the most in counties with the highest drug, alcohol and suicide mortality rates.” West Virginia, where Trump held a rally on August 3, had the highest rate of deaths in 2015. “We are going to solve that problem,” Trump told the crowd. 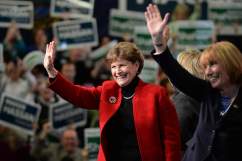 Loading more stories
wpDiscuz
9
0
Would love your thoughts, please comment.x
()
x
| Reply
President Donald Trump will get a briefing on the naiton's growing opioid addiction epidemic during his working vacation.