David Jungerman was in the news when he shot two homeless men on his Missouri property and for once painting a sign on a semi-trailer calling Democrats “parasites,” but now a van allegedly registered to the 79-year-old Kansas City business owner has been linked by witnesses to the shooting death of an up-and-coming lawyer who won a massive civil judgment against him, according to multiple local television reports.

Police in Kansas City, Missouri, have not named David Jungerman as a suspect in the case, although they did release a description of the van, and TV reports said police were swarming the area near his home in Raytown, Missouri. The van is registered to Jungerman, the owner of a firm that makes and sells high chairs for babies, according to KSHB-TV. The attorney who was shot to death, Tom Pickert, was a well-liked trial lawyer who represented a homeless man who won millions of dollars in a civil lawsuit against Jungerman, after the business owner shot him in the leg.

Documents show owner of the van involved in the Brookside shooting belongs to David Jungerman. KCPD says they have talked to him in person.

1. Witnesses Described the White Van ‘Speeding Away’ From the Pickert Murder Scene

Tom Pickert, 39, a partner in a well-known law firm in Kansas City, had just returned home in Brookside, Missouri, after walking his children to school. He was the married father of two young sons. Neighbors described shots ringing out and then hearing a woman’s screams. Pickert’s wife had discovered her husband shot to death in the couple’s front yard. A neighbor told KCUR of seeing a white van “crawling” down Pickert’s street the night before the shooting.

A police spokesperson told The Kansas City Star that Pickert was sitting on his porch when he was shot, saying, “It appears that our victim was sitting on his front porch of his residence when he was shot. The victim’s spouse heard something and came out and discovered her spouse on the ground.” Police released a description of the suspect vehicle.

UPDATE: This vehicle has been located unoccupied. Thank you for your assistance.

The van comes into play because police said witnesses described seeing it speed away from the crime scene; it was later recovered unoccupied. Police released a description of the vehicle on Twitter, and they said that a man was driving it, but they did not release a further description of him. Police have not officially said that the van was registered to Jungerman; that account was widely alleged in Kansas City television newscasts. Authorities also have not released a motive for the crime or any information about the whereabouts of Jungerman after the crime, which took place in the early morning hours of October 25, 2017.

According to Fox4KC, “police have interviewed the registered owner of the white van that was seen leaving the crime scene. The owner was released after questioning.” Police wouldn’t identify the owner, but the television station reported, “records show that the van is registered to a man named David Jungerman.” 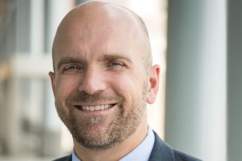 2. Pickert Won Millions of Dollars for His Client, Who Was Shot by Jungerman

The paths of Pickert and Jungerman crossed in court, resulting in a devastating financial judgment against Jungerman. According to KMBC-TV, “Jungerman, the owner of the Babee Tenda Corporation, admits he shot two men he found on his property in September 2012. He says they were in the act of stealing copper from one of his buildings – both of them survived.” Jungerman did not face criminal charges as a result of the shooting. Jungerman represented himself at trial in the case.

“A silent alarm went off and Jungerman went to the building armed with an AK-47. He shot both men,” reports KHSB. Pickert represented Jeffrey S. Harris, one of the men shot, who lost his leg. “The civil suit being handled by Pickert was the case Harris and another person brought against Jungerman after the shooting.” In a story at the time of the shooting of the two homeless men, Jungerman told KMBC: “The fact is they were inside my building in the process of committing a felony and they charged at me and put me in fear for my life. I had no choice but to shoot them.” Jungerman, the television station reported then, “still has the AK-47 used that night.”

A jury eventually ruled against Jungerman in that case and ordered him to pay the victims nearly $6 Million,” the television station reported. “He was served with a garnishment of wages for $5.4 Million just last week.” According to court records in Missouri, a levy was placed on David Jungerman’s property in connection with the court judgment on October 15, 2017. Without naming Jungerman, The Kansas City Star reported that Pickert delivered a closing argument in the civil case, saying, as recounted by Missouri Lawyers Weekly, “A verdict for (the man) is giving him and others like him permission to take the law into their own hands, to be judge, jury and executioner. That’s not the way our society works.”

The newspaper added, “Police on Wednesday (October 26) were still at that man’s Kansas City business and suburban home at 7:30 p.m. Two police cars were at the business. The man’s attorney was also there.” However, the Star said the lawyer declined to comment on the Pickert murder.

3. Jungerman Ran an 80-Year-old Company That Sells Baby Furniture & Shot an Intruder Before

Jungerman’s company creates fall-proof high chairs for babies. His LinkedIn page identified him as the company’s president. According to its website, the Babee Tenda Company “was started in 1937 and since that time over 10,000,000 BabeeTenda Safety Feeding Table units have been sold.The company was started by two engineers who had small children who had been hurt in falls from high chairs and they wanted to design a product that would stop those types of accidents.” The BabeeTenda “was designed so a child cannot climb out, fall out, or tip over, which has always been problems with high chairs. Our mission is to provide the safest, most comfortable and versatile product in which babies can eat and play safely. The unit is designed so it grows with your child from infancy to teenage.”

The shooting of the homeless men was not Jungerman’s first brush with the law. According to Fox4KC, “In 1990, Jungerman was arrested for holding juveniles at gunpoint he found fishing in his pond. Just a month after the shooting of the homeless men at his business in 2012, Jungerman shot another inspected intruder. No charges were filed. Then in 2016, Jungerman was charged with Armed Criminal Infraction and Felony Burglary for intimidating a tenant with a weapon for alleged offenses in Nevada, Mo.”

In 1996, Jungerman sued the Raytown, Missouri Police Department and accused police of losing his watch. A court decision in that lawsuit says, “On July 26, 1990, Raytown police arrested Jungerman after he tried to detain four juveniles for trespassing. Considered in the light most favorable to Jungerman, the evidence shows that the arresting officer transported him to the police station, placed him in the booking area, and took his personal property, including a wallet holding about $1,171 and a gold Rolex watch…Jungerman’s watch was missing when he left the police station the next morning. After the police failed to locate or replace the watch, Jungerman sued Raytown, claiming negligence in handling the watch and failure to administer and supervise the police department.”

A jury sided with Jungerman in that case, awarding him more than $9,000. Raytown argued that it had immunity from the lawsuit. The higher court wrote that a “citizen may reasonably presume that property left with the police will not disappear if the police use due care. The Raytown police had control of Jungerman’s property and, since he was jailed, clearly had superior knowledge about the means or cause of the loss.” Jungerman also was named in an employment benefits decision in which a worker accused the company of making employees move asbestos-laden materials.

4. Jungerman Once Made the News With a Sign Declaring That Democrats Were Parasites

According to the National Election Commission, Jungerman has donated money to President Donald Trump, Rand Paul, and the National Rifle Association of America Political Victory Fund. He hit the news in 2010 when he painted a message “on the side of an 18-wheeler trailer and placed it on his farm land, within view of a high-traffic highway,” reported American Spectator. It read: “Are you a Producer or Parasite. Democrats – Party of the Parasites.” It didn’t last long before it was vandalized.

McClatchyDC reports that “Jungerman’s trailer was torched. The Rich Hill volunteer fire department responded. A week later, it was set afire again. The firefighters put it out again.” The American Spectator wrote an article on Jungerman’s sign, reporting that Jungerman “says he voted for Claire McCaskill for Senate in 2006 and finds local Democrats plenty conservative. He’s dismayed, however, by national Democrats and their base who are ‘sucking this country dry.” The article identified Jungerman as a Raytown farmer who worked 80 hours a week.

According to ThinkProgress, Jungerman “also said that the sign is aimed at national Democrats, not local Democrats, many of whom are ‘are old-fashioned Harry Truman Democrats,’ who Jungerman says are ‘more conservative than many Republicans.’” ChattahBox.com called Jungerman a “gentleman farmer and businessman,” writing that he “has garnered national media attention for his incendiary sign painted on a semi-truck trailer in a cornfield along U.S. 71.” The site reported that Jungerman had taken more than $1 million in federal crop subsidies for his Missouri farm.

5. Pickert Was a Marathon-Running Lawyer Who Made a Name for Himself in Personal Injury Cases

Pickert worked for Fowler Pickert Eisenmenger, LLC, of Kansas City, which describes itself on its website as “a personal injury law firm dedicated to representing injured people and their families.” Pickert’s law firm biography describes him as a married father of two, saying, “Tom lives in Kansas City, MO with his wife and two sons.”

Friends and other members of the legal profession expressed great shock on social media about Pickert’s slaying, describing him as a rising star in the Kansas City legal community who was a good person. They filled Facebook and Twitter with tributes to the up-and-coming attorney. “A lawyer friend of mine, Tom Pickert, was murdered this morning. He was young and had his bright future ahead of him. He leaves behind his wife and two young children,” wrote one man.

In his spare time, Pickert ran marathons. “Tom’s dedication and hard work are not limited to his legal work. He also is a competitive endurance athlete who has successfully completed several sub three-hour marathons and most recently qualified for the Ironman 70.3 World Championships in Las Vegas, NV, and the Ironman World Championships, in Kona, HI,” his law firm biography reported. On LinkedIn, Pickert noted that he was good at triathlons.

Loading more stories
wpDiscuz
0
0
Would love your thoughts, please comment.x
()
x
| Reply
David Jungerman, a Kansas City businessman and Trump donor, has been linked to a van involved in the shooting death of a local lawyer, Tom Pickert.