Tom Pickert, a 39-year-old Kansas City trial attorney, was shot to death outside his home after walking his young children to school, and authorities are investigating a white van that is allegedly tied to a local business owner who was hit with a multi-million dollar judgment in a case involving Pickert.

The van was allegedly registered to a man named David Jungerman, the owner of a baby chair firm, who was socked with a massive civil judgment as the result of a case in which Pickert acted as a lawyer for the other side, according to Fox4KC. Authorities have not identified Jungerman, 79, as a suspect in the slaying of Pickert, however. Jungerman, a Donald Trump donor, was previously in the news for painting a sign on a semi trailer that called Democrats parasites. You can read more about him here.

Pickert was gunned down on the morning of Wednesday, October 25, 2017 in front of his Brookside home, the television station reported. Pickert was a personal injury lawyer for a Kansas City law firm; he often handled nursing home abuse cases, according to his law firm biography. However, the judgment he won against Jungerman involved a shooting of homeless men on Jungerman’s property.

1. A Neighbor Heard Multiple Shots Ring Out & a Woman Screaming

Pickert worked for Fowler Pickert Eisenmenger, LLC, of Kansas City, which describes itself on its website as “a personal injury law firm dedicated to representing injured people and their families.” Pickert’s law firm biography describes him as a married father of two, saying, “Tom lives in Kansas City, MO with his wife and two sons.”

According to KCTV, police say Pickert “went for a walk and was shot as he returned to his home. Officers say Pickert’s wife was home at the time and found her husband lifeless on their front porch. At this point, police have not released a motive.” The television station reported that witnesses had led people to the white van, which was allegedly seen “speeding” away from the murder scene. Kansas City Police released a description of the suspect vehicle but little about the driver, other than to say a male was behind the wheel. The vehicle was later recovered by police without anyone inside of it. Police wrote several tweets on the van.

FoxKC reported that Pickert had just walked his children to school and quoted a neighbor as describing hearing shots ring out and then a woman screaming. David Jungerman’s location after the shooting was not immediately clear. 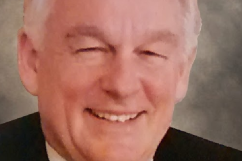 2. Pickert Won Millions of Dollars for a Homeless Man He Represented Against Jungerman

Pickert was the lawyer on the other side in a civil case that involved a major judgment against Jungerman, to whom the suspect vehicle is registered, according to KMBC-TV. The case stemmed from a high-profile shooting that occurred on the property of Jungerman, who runs a company that makes and sells baby furniture.

“Jungerman, the owner of the Babee Tenda Corporation, admits he shot two men he found on his property in September 2012. He says they were in the act of stealing copper from one of his buildings – both of them survived,” reported the television station. Jungerman publicly spoke out in his own defense, but, although he never faced criminal charges, he did not fare well with a civil jury.

Pickert represented one of the shot men, Jeffrey S. Harris, who was homeless, and who lost his leg as a result of his wounds, according to the television station, which reports that a “jury eventually ruled against Jungerman in that case and ordered him to pay the victims nearly $6 Million. He was served with a garnishment of wages for $5.4 Million just last week.” The van, registered to Jungerman, was recovered unoccupied, and it is not clear whether he was driving it during the shooting, reported KMBC.

In a story at the time of the shooting of the two homeless men, Jungerman told KMBC: “The fact is they were inside my building in the process of committing a felony and they charged at me and put me in fear for my life. I had no choice but to shoot them.” Jungerman, the television station reported then, “still has the AK-47 used that night.”

In his spare time, Pickert ran marathons. “Tom’s dedication and hard work are not limited to his legal work. He also is a competitive endurance athlete who has successfully completed several sub three-hour marathons and most recently qualified for the Ironman 70.3 World Championships in Las Vegas, NV, and the Ironman World Championships, in Kona, HI,” his law firm biography reported. On LinkedIn, Pickert noted that he was good at triathlons.

According to the bio, “Before entering private practice, Tom was a research attorney for the Kansas Court of Appeals and also clerked for the Honorable Steve Leben and the Honorable Janice Russell of the District Court of Johnson County, Kansas.” On LinkedIn, Pickert wrote that he and his law firm partners started out in insurance defense: “Before forming Fowler Pickert, Ryan and Tom gained substantial litigation and trial experience as insurance defense attorneys, representing hospitals, long-term care facilities, nursing homes, physicians and other health care providers in negligence and medical malpractice actions. This experience gives Ryan and Tom the unique and invaluable perspective of understanding how the other side is evaluating the same set of facts.”

4. Those Who Knew Pickert Described Him as a Rising Star & ‘Genuinely Good Man’

Friends and other members of the legal profession expressed great shock on social media about Pickert’s slaying, describing him as a rising star in the Kansas City legal community. They filled Facebook and Twitter with tributes to the up-and-coming attorney. “A lawyer friend of mine, Tom Pickert, was murdered this morning. He was young and had his bright future ahead of him. He leaves behind his wife and two young children,” wrote one man.

“When Tom and his law partner Ryan Fowler first started their practice, we spent time together exchanging ideas and advice. Tom and Ryan came to our office and generously offered up their advice to our entire staff about how to handle certain types of cases. Even though you might say we were competitors, both practicing medical malpractice law, we never felt that way. Instead, we felt like brothers trying to help each other any way we could. I will miss this rising star. I’m just so sad and sorry….”

We are saddened to learn of the murder of a Tom Pickert, a tireless attorney, great father, husband, and to many, a friend.

Natalie Davis, a local TV reporter, wrote, “Tom was kind and funny, and he was a compassionate attorney who worked to help people in need. Please say a prayer for the loved ones mourning his loss.” A friend of Pickert’s wrote, “I feel as if I have lost a brother. He was a genuinely good man. A great husband, father, and friend. You will be sorely missed, Tom Pickert.” Legal Staffing Solutions, Inc., also posted a tribute to Pickert, writing, “We are saddened to learn of the passing of Kansas City Attorney Tom Pickert. Tom was a well-respected, talented local attorney who focused his practice on medical malpractice cases on behalf of injured…”

Aaron Lukken described on the Hague Law Blog how Pickert had gained a positive reputation in the legal profession in Kansas City and was supposed to attend a luncheon that day put on by a Missouri trial attorneys organization. “Tom Pickert was an outstanding lawyer, by all accounts around the local bar. Our paths never crossed, at least as recollection says, but our circles overlap considerably. Word of his death came via the listserv of the Missouri Association of Trial Attorneys, just as a few of us were walking into the Association’s membership meeting in Kansas City,” he wrote.

“When the president announced the tragedy to the group, quite a few gasps came out, from those who hadn’t read the email on their phones, along with a few tears from those who knew him. Pickert was supposed to have been in that room, having lunch with his colleagues, perhaps at my table or at the one next to it. Instead, he had been gunned down on his own front porch three hours earlier, while I sipped my morning coffee just a few blocks across our bucolic neighborhood.”

Pickert focused his entire law practice on personal injury cases, according to his law firm bio, and one of his specialty areas was in elder abuse. “Tom devotes 100% of his practice to representing injury victims and their families. He has significant trial and appellate experience and has successfully represented clients in both state and federal court. Over the course of his career, Tom has handled a variety of personal injury matters with an emphasis on medical malpractice and nursing home and long-term care abuse cases,” the bio says.

As Lukken noted on the law blog, “…a lawyer’s first and last objective is justice. We should all share that objective. Plaintiffs’ lawyers, corporate counsel, prosecutors, public defenders… all of us mourn Tom Pickert tonight. And we’ll stand up again tomorrow to fight the good fight.”

Loading more stories
wpDiscuz
0
0
Would love your thoughts, please comment.x
()
x
| Reply
Tom Pickert, a Kansas City, Missouri trial attorney, was gunned down, and a van tied to the shooting was registered to David Jungerman, who was involved in a past case with Pickert.