The Mandalay Bay has released new audio from inside the hotel in the moment after shots were fired at a security guard, and just minutes before a gunman began shooting out of windows at a concert festival.

The audio is of a call for help made by maintenance worker Stephen Schuck, The Associated Press reports. “Call the police, someone’s firing a gun up here, someone’s firing a rifle on the 32nd floor down the hallway,” Schuck tells a hotel security dispatcher as gunfire can be heard in the background.

You can hear the audio below:

New audio recording from inside Mandalay Bay during mass shootingThe motive mystery behind the 1 October shooting is still haunting investigators.2017-10-11T14:00:13.000Z

Lombardo and other authorities had previously said Campos was shot after the gunfire began. But Lombardo now says Paddock fired at Campos, who was unarmed, from inside his room on the 32nd floor of the hotel at 9:59 p.m. Lombardo has said that Paddock unloaded more than 200 rounds into the hallway and Campos was wounded by a ricocheting bullet. Paddock then began shooting at the concert festival at 10:05 p.m., but police did not get to the 32nd floor until 10:17 p.m., two minutes after the gunfire had stopped. Because the shooting had stopped, police didn’t enter the room until 11:20 p.m., which is when Paddock, 64, was found dead of a self-inflicted gunshot wound.

On Tuesday, more confusion was added to the mix when MGM, the owner of the Mandalay Bay, questioned the new timeline. Police have said they hope to release a more detailed timeline on Friday.

“”We cannot be certain about the most recent timeline that has been communicated publically (sic), and we believe what is currently being expressed may not be accurate,” MGM Resorts spokesperson Debra DeShong said in a statement.

NEW: MGM statement says they "cannot be certain" about new timeline but "we believe what is currently being expressed may not be accurate." pic.twitter.com/FkT2zWHV4t

Campos was shot in the leg when the gunfire erupted in the hotel hallway, but police said he was able to get Schuck to safety. “He, immediately upon being injured, notified security of his situation. In close proximity of Mr. Campos being shot there was also a maintenance worker that presented himself on the 32nd floor and Mr. Campos prevented him from receiving any injuries,” Lombardo said.

Schuck told NBC News, “When the first shooting started, I was kind of frozen for a second. He yelled at me, ‘Take cover! Take cover!’ If he yelled a second too late, I would have been shot.”

He said he was “incredibly blessed that somehow I came out of there alive.”

MGM Maintenance Man: I’m ‘Incredibly Blessed’ I Escaped Las Vegas Shooting | TODAYStephen Schuck, a building engineer at the Mandalay Bay Hotel, was on the 32nd floor when the Las Vegas mass shooting began. He tells TODAY that he had been called to check on an exit door and was walking down the hallway when “I started to hear shots ring out” and a co-worker warned him…2017-10-11T12:22:01.000Z

Police defended the response by officers and the hotel on Tuesday, according to the AP.

“Our officers got there as fast as they possibly could and they did what they were trained to do,” Las Vegas assistant sheriff Todd Fasulo told the news agency.

“I can tell you I’m confident that he was not able to fully execute his heinous plan and it certainly had everything to do with being disrupted,” McMahill told the AP. “I don’t think the hotel dropped the ball.”

Campos, 25, has been hailed as a hero for his actions, and Lombardo said his actions still helped officers find where the gunfire was coming from. He said Campos helped “pinpoint the location of the suspect.” Lombardo said Campos reported that he had been shot, but the responding officers did not know he was wounded until they met him “in the hallway after exiting the elevator.”

The security guard was on the 32nd floor responding to a door alarm of a different room than the one Paddock was in, Lombardo said. Campos heard drilling near the door of the room where Paddock was. Lombardo said there was drilling done, and he assumes it was done to place a camera or gun, but it was not completed.

“As you might imagine, Mr. Campos was not only injured when he was fired upon when he did his room check about the door alarm down the hall from the suspect’s room, but he was also extremely shaken up by what happened to him,” Lombardo said. “He was able to confirm for us exactly what he heard and saw in the moments before he was shot.”

Lombardo said Campos was injured before the “mass volley of shooting.” He said, “yes the timeline” of when Campos was shot “has changed through investigation. As I have conveyed to you from the very beginning, in your zest for information, in my zest to ensure the public safety and the calming of their minds, is some things will change. They are minute changes. But what we have learned is that Mr. Campos was encountered by the suspect prior to his shooting into the outside world.”

When asked if Campos’ engagement with the suspect sped up the shooter’s timeline, Lombardo said he would not “make that assumption,” because he’s not privy to that information. The final shots were fired at 10:15 p.m., police said, 10 minutes after they began.

At 10:17 p.m., the first two officers arrived on the 32nd floor, meeting the wounded security guard, Campos. He told the officers that he had been shot and gave the exact location of Paddock’s room, according to police. Eight other officers then came to the floor, including SWAT officers. From 10:26 to 10:30 p.m. the team of officers moved “systematically” down the hallway, “clearing every room and looking for any injured people,” police said in a timeline released last week. Police said they acted that way because they did not hear “the gunfire of an active shooter situation.”

At 10:55 p.m., eight officers moved to the stairwell at the opposite end of the hallway near Paddock’s room. At 11:20 p.m., the first breach was set off outside the room and officers entered. “They observed the suspect down on the ground and also saw a second door that could not be accessed from their position.” they set off another breach explosion at 11:27 p.m. and realized that there was no one else in the room and radioed that the suspect was “down.” Police said Paddock fatally shot himself before the officers entered the room, but it is not clear at what time he did that.

Police said Campos was shot in the leg, but not severely wounded. “It’s amazing” that Campos didn’t sustain more injuries,” Lombardo said last week. The sheriff said, “His bravery was amazing. He gave our officers the key card for the room and then continued clearing rooms until he was ordered to go seek attention.”

Last week, Undersheriff Kevin McMahill said, “Jesus Campos is a true hero. We now know that he was dispatched to a door alarm on the 32nd floor. He went up there to investigate the open door, and as he was doing his job, he came under fire by our suspect.”

He said, “This was a remarkable effort by a brave and remarkable man. I don’t think we’ve done enough in recognizing (Campos) and his actions, and today, I want to apologize, and clear the record that he’s an absolute hero,” McMahill said.

The investigation into the shooting is continuing, with the Las Vegas Metro Police Department, the FBI and other federal agencies working together to determine what happened. Police are convinced there was no second shooter, and have not found any conspirators. Lombardo also said evidence appears to show that Paddock planned to escape from the room after the shooting. He clarified his reasoning for that belief during Monday’s press conference:

That’s been a matter of discussion out there, whether what I said was accurate or not. And what I am comfortable with saying is what I believe. … The suspect … we know that he attempted to shoot at the fuel tanks, we know that he had some personal protection equipment in the room, we know that the car that was found in the parking garage still, contained binary explosives. So I would be comfortable in saying, which I believe, dependent on the splash he made during the shooting would it enable the first responders to be directing their attention to other locations, which would enable Mr. Paddock to just leave the hotel. And we do not know whether he had planned to cause additional harm outside of what occurred at Mandalay Bay.

Lombardo also addressed whether he has been frustrated by the speed of the investigation and the amount information that has been learned by investigators. “Yes I’m frustrated,” Lombardo said. “If you look in the public media, the perception that I am frustrated at the speed of this investigation, yes I am. It isn’t because nobody is not doing their job, it’s because this individual purposefully hid his actions leading up to this event and it is difficult for us to find the answers to those actions. And that’s why it’s important for you to give me some deference, and the FBI some deference and the police department some deference as to the ability to run down these leads.” 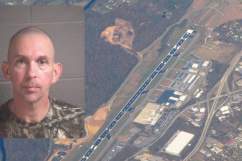