A North Carolina air traffic controller has been accused of possessing a weapon of mass destruction. Paul George Dandan, 30, was arrested on November 10 at Charlotte-Douglas International Airport. Officials haven’t said exactly what type of device Dandan is accused of owning. WNCN reports that the FAA has suspended Dandan’s access to the airport while the FAA and the FBI are investigating the case. Dandan is facing charges of possession of a weapon of mass destruction and two counts of weapons offenses. He is being held on a $45,000 secured bond.

1. Dandan Did Not Have the Device at the Airport

An FAA spokesperson told WBTV that Dandan “only had access to the offsite Air Traffic Control Tower and had not access to the restricted areas of the terminal or ramp. He did not have access to any aircraft at the airport.”

Records show that Dandan was arrested in Charlotte in March 2015 for the misdemeanor offense of “assault on a female.”

In 2010, Dandan was arrested in Daytona Beach, Florida, and accused of domestic battery by strangulation. Dandan commented on his arrest saying:

And you could also post that the arresting officer had no proof because the “victim” was too drunk to write a report, so when she wrote a report the next morning and asked in front of a judge she admitted that the bruises which don’t show up on a neck if something happened in the same hour where from sexual activity… thank you very much.

That comment was made four months after the original arrest.

3. Dandan’s Roommate Has Also Been Arrested

MCSOThe other arrested man has been named as Derrick Fells.

Dandan’s roommate has also been arrested for having bomb-making materials, the Charlotte Observer. Online records show that Derrick Fells is facing three weapons offense charges as well as a charge for possession of a weapon of mass destruction.

4. Dandan’s LinkedIn Page Says He Was Based in Atlanta

Dandan says on his LinkedIn page that he is based in Atlanta, Georgia. He refers to his job as an Air Traffic Control Specialist. His FAA profile gives his job location as being at FAA Dekalb Peachtree ATCT at 2001 Airport Road, Chamblee, Georgia, 30341.

5. There Has Been 6 Security Breaches at Charlotte-Douglas Airport Since 2004

WikipediaThe atrium of the passenger terminal at Charlotte-Douglas International Airport.

The Asheville Citizen Times reports that since 2004 there has been six security breaches at Charlotte-Douglas Airport. The most infamous instance was when teenager Devonte Tisdale, 16, was killed when he stowed away in the wheel well of a Boston-bound flight.

The FBI has described a weapon of mass destruction as:

Any weapons that is designed or intend to cause death or serious bodily injury through the release, dissemination, or impact of toxic or poisonous chemicals, or their precursors;

Any weapon involving a disease organism;

Any weapon that is designed to release radiation or radioactivity at a level dangerous to human life. 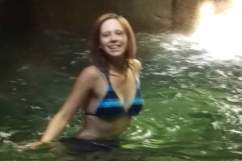