Tony Buzbee is a colorful Houston-area trial attorney and former Marine who is known for his displays of wealth, his winning cases, and his ties to Republican politicians, including President Donald Trump.

In December 2017, Anthony Buzbee was propelled into the headlines again, this time for pressing charges against a 29-year-old court reporter from Dallas, whom he accused of destroying at least $1 million in original Andy Warhol paintings and other artistic sculptures at his $14 million River Oaks mansion. Lindy Lou Layman is charged with a felony as a result of the accusations, which caused headlines around the world.

Media attention was nothing new for Buzbee, who represented former Texas Governor Rick Perry against corruption charges and who once parked an authentic World War II-era tank in his front yard. The Houston Chronicle reports that Layman’s lawyer is now challenging Buzbee’s story, although he has yet to specify how.

How Layman arrived at Buzbee’s multi-million dollar mansion is in dispute. He told Texas Lawyer magazine that she was there with others, and he didn’t know her before. According to KHOU-TV, prosecutors allege that the pair was on a first date.

However, Buzbee told Texas Lawyer that “Layman came to his home with others and that he had not met her prior to that evening.” He told the magazine: “I collect art. I don’t want it damaged. She also pulled a Renoir and a Monet off the wall. Luckily those weren’t damaged.”

Either way, Layman faces serious charges. The criminal complaint, obtained by Heavy, accuses Layman of tearing paintings off walls and pouring liquid on paintings. Click2Houston reported that the liquid was red wine, and Layman allegedly shouted, “I’m not leaving.” Two of the paintings were original Andy Warhol pieces worth $500,000 each, and the two damaged sculptures were valued at about $20,000 a piece, KHOU-TV reported. The criminal complaint charges Layman with a felony for criminal mischief in Harris County. She was arrested on December 23, 2017. Bail was set at $30,000.

The complaint also alleged that Lindy Lou Layman “tore paintings off the wall with her hands, causing damage.” Layman is further accused of throwing sculptures “across the room with her hands” in the artistic rampage. KHOU-TV reports that Buzbee alleged that Layman was so intoxicated that he tried to call her an Uber, but she refused to leave and hid in his home and became aggressive when he tracked her down and tried to call a second Uber. Layman says she has worked as a court reporter for nine years, the television station reported. 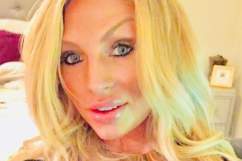 2. Buzbee Is a Former Marine Who Serves on the A & M Board of Regents

According to his website biography, Buzbee came from humble beginnings. “Tony Buzbee is the son of a butcher and high school cafeteria worker,” the bio says. Tony Buzbee was a battalion commander in the Corps of Cadets and was deployed to the Persian Gulf and Somalia, eventually becoming a captain. Buzbee’s biography on the Texas A&M website says that “Anthony G. Buzbee of Houston received a bachelor’s degree in Psychology from Texas A&M University and a law degree summa cum laude from the University of Houston Law Center. Mr. Buzbee is an attorney in private practice and founder of the Buzbee Law Firm in Houston.”

The biography further notes that “Mr. Buzbee served in the United States Marine Corps in the Persian Gulf and Somalian conflicts, earning the rank of Captain, where he received various awards including the prestigious Navy Commendation Medal.”

Former Texas Governor Rick Perry appointed Buzbee to the Board of Regents, the bio says, adding that Buzbee is heavily involved in volunteer efforts, “Aside from legal practice, Mr. Buzbee oversees the activities of Buzbee Properties, Inc., a company that owns and manages more than 80 commercial and retail properties across three states. He is also a board member of Hometown Bank, S.A.; past board member of The Jesse Tree (a nonprofit organization that assists the homeless and those in need) and Boy Scouts of America, Bay Area Council. He is a past member of the Texas A&M University at Galveston Board of Visitors and past director of the Houston Law Alumni Foundation.”

3. Buzbee Married His College Sweetheart, Zoe Buzbee & Has Four Children With Her, Although the Couple Is Divorced

Through 2014, numerous articles reported that he was married to Zoe Buzbee, his college sweetheart, and the parent of four children with her. A 2014 profile on Buzbee described him as married then to wife, Zoe, with four children. You can see a photo of Zoe here and here.

A 2012 article about a multi-million dollar donation that Tony Buzbee and his wife, Zoe, gave to Texas A&M University, said that Buzbee met his wife in college and that she managed the family’s extensive real estate portfolio. “Buzbee and his wife, Zoe, who graduated from Texas A&M in 1991 with an interdisciplinary studies degree, met in an English class. She is president of Buzbee Properties, which owns and manages more than 50 commercial and residential properties in Galveston County. The Buzbees reside in Friendswood, Texas, with their four children,” it reads.

In 2010, Tony Buzbee gave away millions of dollars in exotic cars. “His four children are having a tougher time coming to terms with the extravagant gift of 13 exotic automobiles, including a $525,000 gunmetal gray Mercedes-Benz McLaren SLR; a $250,000, canary yellow Spyker C-8; and a $250,000 Ford GT with a top speed of 205 mph,” reported ABC13. The television station reported that Buzbee gifted the cars to The Jesse Tree, “a faith-based social service agency, of which Buzbee is a longtime board member.”

In part, he was trying to impart a lesson to his children, according to the television station. “The American dream is to be successful,” said Buzbee to ABC13. “I’ve done that beyond any of my expectations. But no responsible citizen should lose sight of the obligation to help others when in a position to do so; that’s what I try, and am trying, to teach my children.” The television station reported that Buzbee was raised in Atlanta, Georgia.

4. Buzbee Once Parked a Real Tank in His Front Yard & Hosted a Fundraiser for Donald Trump

According to the Dallas Morning News, Buzbee was a supporter of Donald Trump’s presidential campaign but turned on Trump when the Access Hollywood controversy erupted over the president’s lewd comments. “In the run-up to last year’s election, he hosted Donald Trump at the River Oaks mansion and donated $250,000 to his presidential campaign. Buzbee later disavowed Trump after the release of the Access Hollywood tape in which the eventual president bragged about groping and forcefully kissing women,” the newspaper reported.

However, Buzbee later gave $500,000 to the president’s inauguration committee, Texas Lawyer reported. That donation came even though Buzbee wrote on social media, “Sorry Donald. I’m done with you. Completely.”

In September 2017, he parked a “fully functional World War II” tank outside his home, according to KHOU-TV. “Attorney Tony Buzbee bought a fully functional World War II tank overseas last year for $600,000. Now he’s temporarily parked it outside his multi-million dollar home in River Oaks,” the television station reported, quoting Buzbee as saying, “Took a year to get here but now it’s on River Oaks Boulevard. This particular tank landed at Normandy. It liberated Paris and ultimately went all the way to Berlin. There’s a lot of history here.”

Buzbee’s cover photo on Facebook is of the tank.

5. Buzbee Has Won Millions of Dollars in Court & Once Faced Drunk Driving Accusations

Buzbee’s prowess in Texas courtrooms is well-known, and being a trial attorney has proven to be a very profitable venture for him. He has won millions of dollars in court settlements. However, he was accused of receiving favoritism in a driven driving case; he denies that he drove drunk.

A 2014 article, originally published in Texas Super Lawyers Magazine, says, “Competitive? Michael Jordan is competitive. Tony Buzbee is a psycho. He’s obsessed with winning. And with his landmark victories including the $75 million he earned for offshore drilling workers in a wage fixing suit, Buzbee’s not only earned respect, but in his 14-year career, he’s pocketed as much money in the courtroom via jury awards as Jordan made on the court.”

The Dallas Morning News identified Anthony Buzbee as a 49-year-old former Marine and “a member of Texas A&M University’s Board of Regents.”

Buzbee was accused of drunken driving in 2016. According to The Houston Chronicle, Buzbee, “one of Houston’s wealthiest attorneys,” was “fighting the release of court records that detail what some local defense lawyers say was special treatment from Harris County’s outgoing district attorney. Prominent trial lawyer Tony Buzbee also is seeking to get his arrest erased from his record.”

The newspaper explained: “District Attorney Devon Anderson dismissed Buzbee’s drunken driving case…saying he completed pretrial intervention, a form of probation typical for first-time driving-while-intoxicated suspects.” Buzbee alleged he was not intoxicated, according to the Chronicle.

Buzbee’s law firm website lists many prominent lawsuits. “After more than two and a half years of litigation, Buzbee was brought in to try a breach of contract and tortious interference with contract case on behalf of one of the largest Mexican grocery store chains in the country. After a two-week trial, the jury returned a verdict exceeding $30 million, with more than $5 million in punitive damages,” the website says of one verdict.

“Hired after almost two years of litigation, Buzbee tried a case for the family of a facilities worker who was killed when a lithium battery exploded. The case was brought against the battery manufacturer under a products liability theory, and against the deceased’s employer alleging gross negligence. Midway through the trial, the manufacturer of the battery settled; at the end of the two-week trial, the jury entered a verdict of $29.1 million for the family. The case is currently on appeal.” He was also hired by musician Jimmy Buffett for trademark issues.