On Monday, French president Emmanuel Macron announced that several climate scientists based on the United States will be awarded research grants allowing them to operate in France for the remainder of Donald Trump’s current presidential term. Here’s five things to know:

Last June, after Donald Trump announced that the U.S. would be withdrawing from the Paris climate accords, French President Emmanuel Macron responded with an English-language speech criticizing Trump’s decision while calling for everyone to “make our planet great again” (an obvious riff off of Trump’s “Make America Great Again” slogan). Macron also offered American scientists refuge in France, saying “They will find in France a second homeland. I call on them, come and work here with us, to work together on concrete solutions for our climate.”

On the 1st of June, President Donald Trump decided to withdraw the United States from the Paris agreement, which gathered more than 190 countries united against climate change.
This decision is unfortunate but it only reinforced our determination. Don’t let it weaken yours.
We are ONE planet and Together, we can make a difference.
France has always led fights for human rights. Today, more than ever, we are determined to lead (and win!) this battle on climate change.
Emmanuel Macron, President of France.

The website’s purpose was to invite climate researchers, NGOs and others to discuss their interest in climate change and their field of specialty, then apply for positions in France and immigration documents to get there. (The online application form starts by asking people to identify as either “a researcher/teacher,” “a business/entrepreneur,” “an association/NGO,” “a student” or “other.”)

2. Macron Announced the Winners the day Before the One Planet Summit

Macron announced the grant winners on Dec. 11. On Dec. 12, France is hosting a “One Planet Summit” in Paris. (The date was chosen because it marks the two-year anniversary of the Paris Agreement.)

The United Nations’ Environment website says “the One Planet Summit will bring together local, regional and national leaders, as well as those working in public and private finance to discuss how they can support and accelerate global efforts to fight climate change.”

The One Planet Summit‘s English language website says the summit is “an alliance of hundreds of global leaders from all sectors, determined to demonstrate the power of collective action in addressing such a global issue as the fight against climate change. The aim is to find new means of financing the adaptation of our ways of life to inevitable transformations, of further speeding up the reduction of greenhouse gas emissions, and of ensuring climate issues are central to the finance sector.”

More than 50 world leaders are expected to attend the summit. The total number of expected attendees is over 2,000, including NGOs, foundations, banks and startups, and actors such as Arnold Schwarzenegger. President Trump was not invited.

3. Most of the ‘Make Our Planet Great Again’ Grants Went to U.S.-based Scientists

The grant selection committee said in a released statement that “The selected projects are of very high standards and deal with issues that are particularly important.” The Make Our Planet Great Again project received a total of 1,822 applications, with 1,123 of those coming from the United States.

The 18 grant winners announced on Monday include Venkatramani Balaji from Princeton University, Nuria Teixido from Stanford, Louis Derry from Cornell and Camille Parmesan from the University of Texas/Austin.

France24 also said that the scientists will conduct research on multiple topics including global warming impacts hurricanes and other storms, the health implications of climate change, and how a warmer planet can affect the economy. ABCNews reports that roughly 50 research projects will be covered in all, at a total cost of roughly 60 million euros ($70 million).

4. Macron has Only Been in Office For Seven Months

Let’s keep defending our progressive values. Thank you for this discussion @BarackObama. pic.twitter.com/8rhNdHkLo8

Macron only became president of France last May, after winning a runoff election against far-right candidate Marine Le Pen. He is 39 years old.

At the beginning of his political career, in 2006, he was a member of France’s Socialist Party, one of two major political parties in France (the other being the Republican Party). However, since 2009 Macron has labeled himself as an “independent.”

5. Macron’s Positions are Centrist by French Standards, Liberal by American Ones

The french president @EmmanuelMacron congrats Openairlines at #techforplanet for the impact of its solution #skybreathe which enable airlines to save 300 000 tons of CO2 this year
now at @joinstationf – thanks @NUMAparis for the amazing night! #OnePlanetSummit  #macron pic.twitter.com/VXiuLK9CFj

Macron’s victory over Marine Le Pen was widely viewed as French voters’ rejection of the far-right nationalistic policies Le Pen promoted. Since he is officially “Independent” as opposed to Socialist or Republican (equivalent to an American politician who belongs to neither the Democratic nor Republican parties), he formed his own political movement called “En Marche,” meaning “Forward.”

Macron supports French membership in the European Union (compared to LePen, who wanted France to withdraw in their own version of Britain’s 2016 “Brexit”), Macron also supports stronger national borders for France, while simultaneously saying that current French security policies unfairly target he country’s Muslim population. He has also been playing a visible role in peacemaking efforts in the Middle East; only two days ago the New York Times ran a story headlined “Macron Steps Into Middle East Role as U.S. Retreats,” noting that Macron and France are filling the diplomatic vacuum left by U.S. State Department staffing cuts under President Trump (and the president’s frequent anti-Muslim tweets, which clearly poison attempts at diplomacy with Muslim nations). 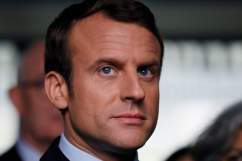