A Connecticut State Police trooper and a wrong-way driver miraculously avoided serious injury when the driver slammed her car head-on into the trooper on Interstate 95 early Monday morning, police say. You can watch video of the crash above.

Ashton Steen, 26, was driving under the influence and told officers she thought she was in New Jersey after the crash, the Connecticut State Police said in a press release.

The video shows Trooper Eduardo Santiago driving down Interstate 95 in the Stamford area about 12:45 a.m. The trooper had slowed traffic behind him after reports of a car driving northbound in the southbound lanes of the highway. Santiago can be seen swerving across all three lanes of traffic with his lights and sirens blaring to keep cars behind him. About 15 seconds into the video, the headlights of the car can be seen in the far left lane of the highway. Santiago tries to position his car to block the lane and stop the driver, and the car crashes into him.

Ashton Steen is accused of driving under the influence after crashing head-on into a Connecticut State Police trooper while driving the wrong way on I-95.

State Police said they received multiple 911 calls alerting them to the the driver before the crash.

“With the assistance of DOT highway cameras, troopers located and observed the vehicle, a 2016 Audi, being operated at a high rate of speed in the left and center lanes northbound on the southbound side of I-95. There was moderate traffic on the highway and troopers observed the Audi nearly hit several vehicles,” police said in the press release. “Troopers responded to the area and slowed southbound traffic while one trooper continued driving southbound on I-95 with his cruiser emergency lights and siren activated. The trooper drove back and forth across the highway lanes in an attempt to get the attention of the Audi operator.”

A screenshot shows the moment before the crash.

According to police, “The trooper saw the Audi approaching him traveling northbound in the southbound left lane in the area of exit 12 in Stamford, however, despite the cruiser having its emergency lights and siren activated, the Audi operator did not reduce speed, yield to the emergency vehicle or stop. As the Audi continued to approach, the trooper moved closer in another attempt to get the operator’s attention. The operator still continued traveling, therefore the trooper made the decision to use his cruiser to stop the wrong-way driver.”

Police said the crash disabled both vehicles, but the trooper was not injured and was able to exit his vehicle. He went to the Audi and found the driver, Ashton Steen, inside. She was also not injured, police said.

“As troopers spoke with Steen, they determined she was under the influence of alcohol. Steen also stated that she had been consuming alcohol and believed she was in New Jersey,” state police said.

According to police, Steen failed a series of sobriety tests and was taken into custody.

Steen, of Darien, was charged with reckless driving, second-degree reckless endangerment, operating under the influence of alcohol and operating the wrong way, all misdemanor charges. She was released after posting $10,000 bail and is scheduled to appear in state Superior Court in Stamford on February 20, police said.

According to her Linkedin profile, Steen, who does not appear to have a criminal record in Connecticut, works as an assistant project manager at Balance Inc., a promotional products supplier in Danbury. She graduated from the University of Bridgeport last spring with a degree in psychology and previously attended Darien High School.

Connecticut State Police offered the following tips for what to do if you see a wrong-way driver:

WHAT TO DO IF YOU SEE A WRONG-WAY DRIVER

-Slow down and safely move to the right shoulder or as far to the right as possible.
-If it can be avoided do not slam on the brakes, especially if there is a vehicle directly behind you and avoid swerving into other lanes or off of the road.
-Honk the horn, flash your vehicle’s headlights and turn on the hazard lights. It’s possible that you may be able to make the wrong-way driver aware that they are traveling in the wrong direction.
-As soon as it is safe to do so, call 911 and report the wrong-way driver. Be sure to give your location including direction of travel and closest exit. And if you are able to, provide a description of the vehicle.
-NEVER turn around and follow a wrong-way driver!
-When driving on the highway at night, especially after midnight, travel in the center or right lane. Wrong-way drivers often travel in the left lane thinking they are in the right lane for their direction of travel. 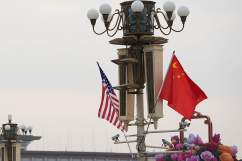 Read More
Breaking News, Connecticut, Crime, Police
Ashton Steen was drunk, driving the wrong way and thought she was in New Jersey when she slammed into a Connecticut State Police trooper on I-95, authorities say. Watch video of the crash here.