Lauren Anne Birchfield Kennedy, a California-born lawyer, is the wife of Massachusetts Rep. Joe Kennedy III, who delivered the Democratic response to President Donald Trump’s State of the Union on Tuesday night.

Go get ‘em, Daddy. We love you! pic.twitter.com/ZhMU3vGEhu

Birchfield Kennedy, 33, has been married to Joe Kennedy since 2012. They met at Harvard Law School and were engaged while Joe was running for Congress and have two children together, a daughter and a son.

Here’s what you need to know about Lauren Birchfield Kennedy:

Lauren Birchfield and Joe Kennedy, the son of former Rep. Joseph Kennedy II and grandson of Robert F. Kennedy, met at Harvard law School when they were both students in a class taught by now-Senator Elizabeth Warren.

“He sat in the front row, on my left, and Lauren was in the back row on my right,” Warren told WPRI-TV in 2013. “Joe tells me there are five couples from that class, and I take credit for all of them!”

Joe and Lauren Birchfield Kennedy on their wedding day in 2012.

Lauren and Joe graduated from the law school together in 2009. Kennedy proposed to Birchfield in January 2012, shortly before announcing his run for office, and they were married later that year, in December, just after his electio victoryn. The wedding was held at the seaside Community Church in Corona del Mar, California, and was officiated by Birchfield’s father, Reverend Jim Birchfield, according to a statement from Kennedy’s office.

“The bride and groom are extremely grateful for all the well wishes and for the outpouring of support and friendship they have received this year,” the Kennedys said in a statement.

Bichfield, who was born and raised in California, where her father was a pastor at St. Andrews Presbyterian Church in Newport Beach, has a younger sister, Emily. Her mother, Marta, is a former certified public accountant at Arthur Anderson who now has her own consulting practice. Birchfield’s parents live in Houston, where her father is the pastor at First Presbyterian Church of Houston.

Joe’s mother, Sheila Rauch Kennedy, told the Daily Mail that her son and daughter-in-law will have to work to keep their relationship together through the strain of politics.

“The first thing Joe and Lauren will do is sit down and figure out how to make it work. He’s going to have a busy time in Washington, Congressmen go back and forward a lot,” she told the Daily Mail after his election victory in 2012. “Joe is a very different man from his father. I think balance is the key word. Joe is very hard working, but he’s also very aware of the need for balance in his life. He’s got a wonderful fiancee in Lauren who’s very supportive. Lauren is a very, very bright woman and she listens. I think they come into this as much as a partnership as anything else.”

She added, “There are different times [in politics] that are more difficult than others. I think there’s more understanding and acceptance [of wives] these days. Lauren is a very bright woman and she listens. There are more women in Congress for a start. It’s the exception not the rule now where there’s one person who is at home and doesn’t work. They’ll make it work.” 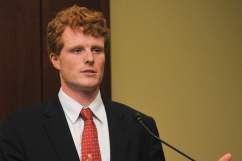 2. A Health Policy Lawyer, She’s Worked for NARAL & the National Partnership for Women & Families, & Has Advocated for CHIP Funding

Lauren Birchfield Kennedy graduated from UCLA in 2006 with a degree in political science prior to attending Harvard Law School. She was a Rhodes Finalist at UCLA and studied at Oxford University in England. Kennedy has worked as a lawyer in health policy. She was most recently the director of health policy for the national Partnership for Women & Families in Washington, D.C. She led the National Partnership’s health policy portfolio and oversaw advocacy strategy for key policy initiatives, including the implementation of the Affordable Care Act, according to its website.

Lauren has “has an extensive background in women’s health policy and expertise in health programs serving lower income women, including Medicaid and the Title X family-planning program,” the organization’s website said.

She discussed her work surrounding Obamacare in 2015 during an interview you can watch before. She told radio host Carole Marks that the Affordable Care Act is the “greatest advance in women’s health in a generation.”

“Thanks to the Affordable Care Act, women can no longer be charged more for their health coverage because of their gender, they’ve got peace of mind knowing that when they enroll in a market-based plan it will cover the health services that are essential to their health and well-being ― maternity care, birth control, preventative screenings for breast and cervical cancer,” she said. “So, this case is really critical with respect to making sure that the affordability of health coverage is preserved for everyone in this country.”

Before working at the National Partnership for Birchfield Kennedy was the senior health policy and government affairs adviser for Boston Medical Center and a policy representative for NARAL Pro-Choice America. She also held a senior policy position at the Blue Cross Blue Shield of Massachusetts Foundation and was on the board of Family Medicine for America’s Health from 2014 to 2017.

Since her husband took office, Lauren Birchfield Kennedy has used experience in the health care sector to advocate for health care issues. Most recently, she authored an opinion piece in Cosmopolitan about the need for funding for the Children’s Health Insurance Program, commonly known as CHIP.

“As any parent will tell you, nothing brings you face to face with vulnerability like the birth of a child. What they don’t tell you is that the vulnerability never goes away. That from that first cry, you will spend many a future moment wrestling with the consuming joy and complete terror of loving someone so deeply,” she wrote in a January 16 piece that shared a byline with her husband. “You also learn that there are places your protection cannot reach. Few monsters terrify a parent more than illness, particularly when our children are young and small of body. That’s why few issues have united families in America more consistently than the cause of ensuring that all children have access to high-quality medical care. For twenty years, the Children’s Health Insurance Program (CHIP) has been the anchor of that effort; it covers children and pregnant women who cannot afford private insurance but who do not qualify for traditional Medicaid.” 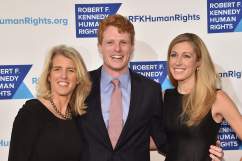 Lauren Birchfield Kennedy recently co-founded Neighborhood Villages, a Massachusetts-based nonprofit that is trying to improve access to high-quality and affordable childcare, according to its website. She founded the nonprofit alongside Sarah Siegel Muncey, a former teacher and administrator at the Boston Collegiate Charter School.

Affordable Childcare Forum with Lauren Kennedy and Sarah MunceyThriving Children, Strong Communities Communities of color have historically been denied education. Now that we have access to education, are we being deprived adequate educational facilities? Lauren Kennedy and Sarah Muncey recently founded Neighborhood Villages, a nonprofit that will seek to help improve access to affordable, high-quality child care in the City of Boston. Neighborhood…2017-06-21T12:29:00.000Z

“At Neighborhood Villages, we believe that all children have the right to thrive and all families have the right to aspire for their children to succeed. Research shows that a child’s environment during the first years of life will have a lasting impact on her or his health, education outcomes, and opportunity to live a life of choices. A family’s access to affordable, quality child care can be the difference,” Neighborhood Villages says on its website. “Neighborhood Villages is piloting a new model of affordable, quality child care that begins at birth; one that is highly integrated with health care delivery and designed to serve the whole child and family. Through partnership with community health providers, we integrate health care and on-site wraparound support services into the fabric of our schools to set children and their families up to thrive.” 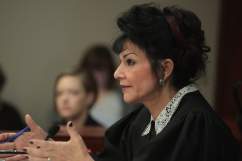 Lauren and Joe Kennedy have two children together, Elenaor, 2, and 1-month-old James.

“Lauren and I are so happy to announce that our daughter Eleanor (Ellie) arrived this morning!” Kennedy wrote in a Facebook post after his daughter’s birth on December 29, 2015. “Her mom is doing great and her dad can’t stop smiling. We are so grateful for all of the love and support we’ve received and can’t wait to introduce her to everyone in the new year!”

He added, (Banjo remains very skeptical of what this means for his social media fame…),” referencing his family’s dog.

James Matthew Kennedy was born December 20, 2017. Kennedy wrote on Facebook. “Meet James Matthew Kennedy! Born early this morning and doing great. First gift he received was – appropriately – a Patriots football from Grandpa Joe. Mom, Dad, and Big Sister Eleanor are exhausted, over the moon and deeply grateful for your support.”

Wishing a happy #MothersDay to all of the moms & grandmothers enjoying today! pic.twitter.com/4DoVv6JSIC

Joe Kennedy told Politico last year that his political career and aspirations can be hard on his young family. He travels between Washington and Massachusetts.

“It’s awfully hard on a family, particularly a young family, there’s no doubt about that,” he told Politico, but added, “The conversations I’ve had with my wife on this … the issues both of us care about are more at risk today than they would be under a Democratic administration.” 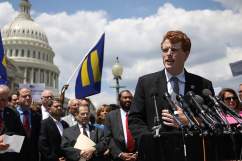 LIVE STREAM: Democrats’ Response to the State of the Union [FULL VIDEO]

5. The Kennedys Have an Estimated Net Worth of At Least $15 Million, Making Joe One of the Richest Members of Congress

Rep. Joe Kennedy is one of the richest members of Congress. In 2017, he was ranked the 22nd wealthiest member of Congress by 24/7 Wall Street. He and his wife, Lauren, have an estimated net worth of at least $15 million. 24/7 Wall Street found his net worth to be more than $66 million, while other estimates put their net worth between $15 to $56 million.

Most of their net worth comes from trusts he has inherited through his family. Before running for Congress and winning his seat in the House, Joe Kennedy worked as a county prosecutor in Massachusetts. He left that job after announcing his run for office.

“The Massachusetts Democrat’s portfolio is filled with a slew of amply stocked trust funds and individual investments totaling more than $19 million. His most generous commodities include a common trust fund worth at least $5 million, while his largest stake in any single enterprise appears to be the at least $750,000 he’s sunk into Exxon Mobil,” Roll Call reported in 2015. “He and wife Lauren Anne Birchfield also managed to chip away some $40,000 of their debt. Her student loans remain (she’s in the hole some $50,000 to the federal government, Harvard and a Des Moines-based educational outfit), as does at least $750,000 in mortgage payments on their East Coast residences; the District digs continue to set the couple back at least half a million dollars.”

The Kennedys have lived at a home in Chestnut Hill, Massachusetts, since May 2016. They purchased the seven-bedroom home for $2.825 million, property records show. They previously lived in Brookline. 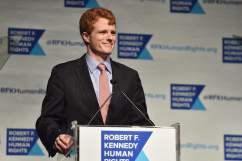 Joe Kennedy’s Net Worth: 5 Fast Facts You Need to Know