Facebook The hat in Prentis Robinson's photo here looks like the same one he was wearing when he was shot.

A North Carolina man who was streaming live video on Facebook was fatally shot while walking down the street on Monday.

Prentis Robinson, who just turned 55 a few days ago, was killed shortly after going to the Wingate Police Department to report his cell phone had been stolen. Robinson often streamed live videos on Facebook and at times highlighted issues in his community, including calling out drug dealers, a friend told NBC News. A friend told the Charlotte Observer that Robinson would also “go live” if someone “messed with him.”

A suspect in the shooting, Douglas Colson, was arrested Tuesday, a day after Robinson streamed his own shooting death on Facebook. Wingate Police Chief Donnie Gay, who spoke with Robinson on the live stream just minutes before the shooting, told NBC News investigators do not yet know why Robinson was targeted. Colson, a lifelong resident of Wingate, located south of Charlotte, has a past criminal record.

Here’s everything you need to know about Robinson and the tragedy:

1. Robinson Had Gone to Talk to the Police About His Stolen Phone Just 5 Minutes Before He Was Shot

Prentis Robinson, 55, had just gone to the Wingate Police Department to inquire about his stolen cell phone a few minutes before he was killed on Facebook Live, and now police are trying to find the suspect. The police department is just around the corner from Jerome Street, Charlotte Observer reported. A video he streamed live shows him talking to Wingate Police Chief Donnie Gay, who tells him he hasn’t phone the found yet. Robinson then asks Gay to give a message to the phone thief, and Gay tells the camera, “Bring his phone back so he can get on with his way today.” Robinson then shook hands with Gay and continued walking.

Robinson was killed at College Street and Jerome. The nearby Wingate University was locked down as a precaution, but the lockdown was later lifted. Law enforcement did not believe the suspect had been on campus.

This is College St across from Wingate University. A man was shot and killed at College St and Jerome St this morning. The scene is just behind the city police department pic.twitter.com/JpZTG1PmIG

Robinson was wearing a hat, a white jacket, and carrying a selfie stick when he was killed.

Robinson had just been talking about wanting to move to Atlanta on his Facebook Live before he was shot. The suspect can be seen firing four shots on the video. The Wingate Police Chief, Donnie Gay, told reporters that it was very concerning that this happened just a block away from the police department.

Wingate Police chief Donnie Gay says the victim, Prentis Robinson was just at the police Dept talking with him about a stolen cell phone, two minutes before he was shot. “I don’t know what to say about that.” The chief said. pic.twitter.com/nzpKnsD0L9

“Only being a block or so away from the police department — if that’s not brazen I don’t know what is,” Gay told NBC News. “It’s heartbreaking. I can’t believe it.” 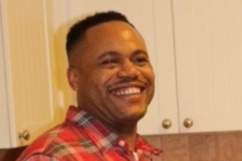 2. Robinson Tried to Calmly Tell the Shooter That He Was Livestreaming

Robinson had been filming his journey that day on Facebook Live, including going to the police about his stolen phone just a few minutes before he was killed. In fact, filming on Facebook Live was a common  habit for Robinson, who enjoyed using the social media platform. After he retrieved his stolen phone, Robinson continued filming on Facebook Live, sharing with his friends and followers about what had happened. That’s when he was killed. About five minutes into his video, he ran into someone off camera. He told them “You on live” multiple times, trying to calmly let them know that he was filming live on Facebook. The person suspected of killing him was briefly seen on the video, holding a long black object that might have been a firearm.

The man who is suspected of killing Robinson has not been apprehended. He is described by Wingate University as a black male with a long gun, wearing a black and blue windbreaker and brown Timberland boots.

Local police later announced that they issued a warrant for Douglas Colson, 65, in connection with the shooting. Colson turned himself in to the Wingate Police Department about 9 a.m. Tuesday after learning police were looking for him. He is facing a first-degree murder charge.

According to the Charlotte Observer, Colson was found guilty of selling cocaine in 2013.

Just in—warrants are out for Douglas Colson for the murder of Prentis Robinson in Wingate today. Police believe Colson who is from Marshville, shot Robinson on College Street today while Robinson was on Facebook Live possibly “outing” Local suspected drug dealers. pic.twitter.com/bzfBlwQsnX

Robinson’s family said that Robinson often went on Facebook Live, Fox 46 reported. “If somebody messed with him, he’d definitely go on Live,” one person said. Herbert Jordan, who was friends on Facebook with Robinson, saw the video as it happened and shared these screenshots of the suspect from the video:

3. Robinson Was a Local Musician Who Celebrated His 55th Birthday Just a Few Days Earlier

He frequently used Facebook live when he was out and about. The video below is the last one publicly available on his profile, taken the day before he died. The video from when he was shot has been taken down.

Many accounts are saying that today was his birthday, but Greg Suskin of WSOC9 reported that Robinson’s family said his 55th birthday had been a few days earlier, on Friday.

Family members of Prentis Robinson, who was shot and killed in Wingate this morning, gave me this photo of him. They also told me he just had a birthday Friday. No arrests yet in his murder. pic.twitter.com/2UfPvmXirc

Robinson lived in Charlotte in the mid-2000s, but was living in Wingate at the time of his death, Charlotte Observer reported. He was a graduate of Forest Hills High School, and lived in humble surroundings.

Outside Prentis Robinson’s home. I just spoke with family members who said he was always walking down the street on Facebook Live. “Walking and talking. Just walking and talking. If somebody messed with him he’d definitely go on Live.” pic.twitter.com/5x2p8LfFaQ

At the time of publication, the suspect is still at large and it is not known what the motive was for the shooting. Robinson’s family is trying to come up with ideas why this might have happened. David Sentendrey of Fox 46 reported that Robinson’s family said he would often try to help police find drug dealers in the neighborhood, even though “he had his own demons.” But he also sometimes felt like the police were annoyed by him.

Family members of Prentis Robinson have seen the Facebook Live video where he was killed. They said sometimes he would try to help police find drug dealers, even though he had his own demons. They added, sometimes they felt like police were annoyed with him. pic.twitter.com/qKvES7ZlX4

“If people don’t like it and they get angry, at some point in time it will start and something will happen,” his friend, Chester Sanders, told NBC News. “I don’t know if this was the reason for … this tragedy to happen but it happened.”

In one video, Robinson can be seen talking about his neighbors, “They’re afraid of some of the activities going on. I’m trying to keep the neighborhood quiet like this — peaceful.”

5. Robinson Was Friendly to Everybody, Friends Said

Facebook said in a statement that it removed the video because it cannot be known if Robinson wanted “this horrific act to be live streamed on social media.” In May, the company announced that it was hiring 3,000 people to help identify and remove violent videos.

“This is a terrible incident and our thoughts are with the victim and his loved ones. Because we cannot have known that the victim would have wanted this horrific act to be live-streamed on social media, we have removed the original video,” Facebook said in the statement. “We will apply a warning screen to future uploads of the video intended to raise awareness or condemn this tragedy, and limit accessibility to people over the age of 18. We will remove instances of videos from Facebook that are shared supporting or encouraging such acts of violence.”

It is not the first time someone’s death has been seen on the social media platform. On Easter Sunday last year, a Cleveland man, Robert Godwin Sr., 74, was fatally shot while walking down the street. The shooter, Steve Stephens, recorded video of the shooting and posted it to his Facebook page.

In Minnesota, the fatal police shooting of Philando Castile in July 2016 was livestreamed by his girlfriend.

“We want people to feel safe using Facebook, which is why we have policies in place prohibiting direct threats, attacks, serious threats of harm to public and personal safety and other criminal activity. We give people tools to report content that violates our policies, and take swift action to remove violating content when it’s reported to us,” the company said in a statement after the lawsuit was filed. “We sympathize with the victim’s family, who suffered such a tragic and senseless loss.”

Loading more stories
wpDiscuz
0
0
Would love your thoughts, please comment.x
()
x
| Reply
Prentis Robinson was shot and killed on Facebook Live in Wingate, North Carolina. A suspect is in custody.