Longtime Nashville mayoral bodyguard Sergeant Robert Downs Forrest Jr., who by default via his resignation admitted to having an affair with now-former Mayor Megan Barry, has pleaded guilty to theft and is being sued by his wife for divorce.

1. Forrest, Barry’s Former Bodyguard, Resigned After the Mayor Admitted Her Affair With Him

On Jan. 31, Mayor Barry admitted to having an affair with Forrest. After 31 years with the police department, 14 of those years as supervisor of mayoral security, Forrest resigned that same day.

The affair began in 2016, several months after Barry was elected. A state law enforcement investigation found that Forrest took two photos of a nude woman believed to be Barry on his city-issued phone, an affidavit released Feb. 22. 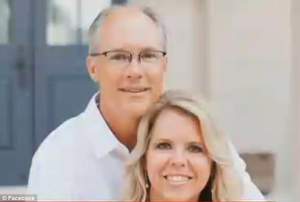 On February 23, Penny Genelle Nelson Forrest, 53, of Hermitage, Tennesse, filed for divorce in the Fourth Circuit Court, Davidson County at Nashville, from her husband, the now former Metro Nashville Police Department sergeant after learning of the admitted near two-year affair between her husband and the Mayor of Nashville.

Court records show Penny Forrest noted her husband “has been guilty of inappropriate marital conduct as to render further cohabitation unsafe and improper.” Her attorney is Gregory Dye Smith. Robert Forrest’s attorney Brenton Lankford said in a statement issued to local media that his client “deeply regrets that his conduct will cost him his marriage.” Records show the couple separated the day following Barry’s admission of the affair. Depositions are expected and may be more revealing, local media has reported.

3. Forrest Pleaded Guilty to Theft & Was Sentenced to 3 Years Probation & Must Pay $45,000 in Restitution

Following the Tennessee Bureau of Investigation and Tennessee Comptroller of the Treasury case looking into the affair and related financial crimes, Forrest pleaded guilty Tuesday to criminal theft of property over $10,000 and was given three years of unsupervised probation. If he completes that probation, which is part of a diversionary program, he can apply to have the conviction wiped from his record. Barry accepted the same plea deal.

He must also reimburse the city of Nashville $45,000 paid to him as salary. Earlier in the day, Barry pleaded guilty to felony theft as part of the affair. The Tennessean reported the prosecuting attorney said that “had this case gone to trial, witnesses are available who would testify that in March 2016 and January 2018 Megan Barry caused over 10K but less than 60K in Metro Nashville city funds to be expended unlawfully on Mr. Robert Forrest.” Barry promptly resigned as mayor but for now, Barry is still on Facebook and Twitter as Nashville Mayor and posted a link to a personal statement to the residents of Nashville.

Reports say Barry and Forrest “went together, without any other city employees, on nine trips around the country and the globe, according to travel, expenditure and scheduling records including trips from Athens, Greece to San Francisco, The Tennessean reported.

5. Forrest’s Daughter, Macy Forrest Amos, Was Hired By Nashville as an Attorney

According to The Tennessean, the job for which Amos was hired, while an entry-level city attorney post, was the first newly created job in the City’s legal department in a number of years and was not a budgeted position. Barry approved the new job opening and no other candidate was considered.

The city’s law department director claims the decision to hire Amos was his.
Macy Amos’ Twitter page has been set to private.

Read More
5 Fast Facts, Breaking News, Crime
Longtime Nashville mayoral bodyguard Sgt. Robert Downs Forrest Jr., who by default via his resignation admitted to having an affair with now-former Mayor Megan Barry, has pleaded guilty to theft and is being sued by his wife for divorce. Barry pleaded guilty to theft Tuesday as well and also resigned as mayor of Nashville Tuesday morning.