Stormy Daniels, whose real name is Stephanie Clifford, sat down for an interview with Anderson Cooper for an interview that aired on Sunday, March 25. During the 60 Minutes interview, Daniels discussed the affair that she claims to have had with President Donald Trump.

Daniels is married to Glendon Crain and the couple has one daughter together. Daniels is estranged from her parents.

1. She & Her Husband Have a 7-Year-Old Daughter

Daniels is a mom of one. She and her husband welcomed their only child — a daughter — into the world seven years ago.

Daniels was unsure about whether or not she wanted to have children, but after falling in love with Crain, her thoughts on the matter changed. According to the Daily Beast, it’s because she “met the right guy.” While she knew that it wasn’t going to be easy, she and Crain were in love and they decided that they wanted to start a family together.

“I had to work really hard and prepare a lot to have a baby because I’m not like a normal mom. I can’t work while I’m pregnant. I did two years of work in one year,” she told the Daily Beast.

When she got pregnant, she kept the news a secret in an effort to “avoid negativity” that would stem from her chosen career.

Daniels manages to keep her daughter completely out of the mainstream media and she never shares photos of her on social media.

“No one would ever know that we have this whole other existence together. We have this smart, amazing, beautiful daughter that is awesome,” she told the Daily Beast back in 2012. She also said that she plans to tell her daughter about her job when she’s old enough to understand.

“I’ll tell her Mommy has a job that some people don’t approve of, but Mommy’s proud of it and it’s for adults,” she explained.

2. Her Mom, Sheila Gregory, Is a Trump-Supporter & Hasn’t Spoken to Her in Over a Decade

Headed to the ballet

Daniels’ mom, Sheila Gregory, is estranged from her daughter. The two haven’t spoken in 12 years, according to Gregory, who spoke with the Dallas News earlier this month. Gregory said that the two stopped talking around the same time that Daniels claims to have had an affair with Trump and that Daniels never told her about the alleged relationship.

“It hurts me deeply. My friends all say the same thing: ‘I can’t believe that is the same sweet child — you took such good care of her.’ I say, ‘How do you think I feel?'” Gregory told the outlet.

Gregory raised Daniels by herself. She worked as a trucking company manager, barely making enough money to live. Even still, Gregory managed to send Daniels to dance class and horse riding lessons, according to the Dallas News.

Gregory doesn’t know why Daniels stopped speaking to her. What she does know, however, is that she likes President Trump and she hopes that he’s in office for a long time.

“If Mr. Trump runs four more times, I would vote for him every time. I like him. I like the way he handles things. It’s time this country is put back where it belongs — taking care of the people here instead of the people who don’t belong here,” she told the Dallas News.

3. Her Father, Bill Gregory, Works as a Construction Manager  & Is Also Estranged From Her

Bill Gregory lives in Los Angeles with his fifth wife, Gail, where he works as a construction manager. Although he left Daniels’ mom when she was young, he still sent child support and tried his best to make sure that his daughter was okay. However, Gregory hasn’t talked to Daniels in almost 20 years.

“I see her in the news — everything that’s going on — it’s hard. It’s become a real mess, looks like to me. I like Trump and I like my daughter. I don’t want to pick sides. It’s unfortunate that it’s gotten to this point,” Gregory told Inside Edition.

As far as her career choice goes, Gregory told Inside Edition that he’s “disappointed,” and added that Daniels actually wanted to be a veterinarian.

“At least she’s successful at it. I guess if you’re gonna do something you should be successful and I’m proud of her for being successful. She’s obviously very intelligent. She’s written books, she’s directing movies now, too. It’s just unfortunate that that’s what she chose to do as far as I am concerned,” he told the outlet.

As far as Daniels’ alleged affair with President Trump goes, Gregory believes that it happened. He told the Daily Mail that he is worried for his daughter’s safety, especially because she doesn’t seem to be backing down any.

“I think it’s getting out of control, I worry somebody is going to kill her. You start messing with big people like this, people with money, it’s not a good idea to rattle their cage,” he told the outlet. He added that he was originally a Trump supporter, but he’s not too sure about the President of the United States these days. “I think he’s a little crazy,” Gregory said. Even still, Gregory seems to like that there’s a “shake-up” in the White House.

“I kind of like how he shakes everything up. I’m tired of the same old same old – we were in a rut. The American people lost control of their government,” he said.

4. She Is Married to Glendon Crain

According to his bio on IMDB, Miller has been a touring drummer for nearly two decades, performing for the likes of Loser, New Dead Radio, Godhead, and Hollywood Undead, in addition to working on his own side project, Yeti.

5. She Was Previously Married to Mike Moz

Daniels was previously married to Michael Mosny, also known as Mike Moz. The two wed in 2007, but divorced in 2009.

In addition to appearing on screen, Mosny has also served as art director on three films written and directed by Daniels: 2007’s Operation: Desert Stormy, Predator II: The Return and 2009’s Whack Job.

According to the Smoking Gun, Daniels was arrested by the Tampa Police Department in 2009 on charges of battery, stemming from an altercation with Mosny. The outlet provides screen shots of what appears to be a police report.

“The defendant and victim had a verbal argument which escalated into the defendant hitting the victim several times in the head with her hands. The victim suffered no injuries,” the police report read in part.

But what started the argument?

“Post Miranda, Stephanie Clifford advised that she got upset because the way the laundry had been done. She opened some mail and discovered her husband, Michael, had not paid a bill that she had given him money to pay. Now their bank account was frozen” according to a statement from the interviewing officer, Steven A. Smith. 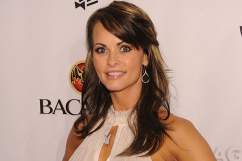 Read More
5 Fast Facts, Donald Trump
Stormy Daniels' mom and dad divorced when she was 4. She doesn't talk to her parents. She is married and has one daughter. Here's what you need to know.