After admitting to having an affair with Donald Trump in an interview with In Touch in January 2017, Daniels made a complete u-turn on the day of Trump’s first State of the Union address. A January 30 statement, Anthony Cormier, said, “Over the past few weeks I have been asked countless times to comment on reports of an alleged sexual relationship I had with Donald Trump, many, many, many years ago. The fact of the matter is that each party to this alleged affair denied its existence in 2006, 2011, 2016, 2017 and now again in 2018. I am not denying this affair because I was paid “hush money” as has been reported in overseas owned tabloids. I am denying this affair because it never happened.” Daniels goes on to say that she will not be offering any further comment on the issue.

The Wall Street Journal published a report on January 12 saying that Daniels was paid $130,000 to sign a non-disclosure agreement relating to their alleged affair. Sources told the newspaper that the couple had multiple consensual encounters at Lake Tahoe when she was 27. The timeline quoted by the Journal would mean that Trump had been married to First Lady Melania Trump for one-year at the time. Following Daniels’ arrest at a strip club in Columbus in July 2018, TMZ reported that the arrest report stated that Daniels was not married. Her lawyer, Michael Avenatti told the website that his client was still married and didn’t know why the arrest reported did not reflect that.

Here’s what you need to know about Mr. Stormy Daniels:

1. Crain Is Accusing Daniels of Cheating on Him

TMZ reported on July 23 that Crain had filed for divorce from Daniels, though the reason was unknown. When Daniels was arrested at Sirens strip club in Columbus, Ohio, she said she was unmarried in charging documents. The TMZ report notes that since Daniels began alleging her affair and pay off from President Donald Trump, she and Crain have “rarely” been seen together.

TMZ later reported that Crain was accusing Daniels of cheating on him. He’s seeking a restraing order against Daniels for him and their 7-year-old child. Crain says that Daniels wanted to bring the child on tour with her, where she would be exposed to other adult performers.

2. Neither Crain or Daniels Thought They Would Ever Have Children; Until They Met Each Other

Facebook/Glendon CrainCrain and Daniels pictured at the XBiz Awards in February 2011.

In July 2015, Crain was accused of family violence and “intentionally, knowingly or recklessly causing bodily injury,” after he allegedly pushed Daniels to the floor. That’s according to a March 2018 Daily Mail report. Two days after his arrest, Crain was released from custody. On March 15, 2018, the charges against Crain were dropped after he completed a rehab program. Shortly afterwards, Daniels made world news with her 60 Minutes interview. The Daily Mail report adds that the full documents relating to Crain’s arrest were being withheld because the it is possible that the case could be reopened. 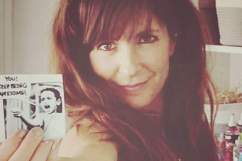 4. Crain Was in the Only Band Ever Signed to Marilyn Manson’s Short Lived Record Label

Crain was a former drummer in Godhead, a heavy metal band that has the honor of being the only band ever signed to Marilyn Manson’s label, Posthuman Records in 2001. That same year, the band headlined the second stage at Ozzfest. Though Crain didn’t join the band until after their glory days, joining ranks in 2006, after a spell playing in Loser with former Manson musician John 5. Crain left Godhead in 2008. On his Instagram, Crain says, “Drummer for that band that you’ve heard of, that band you haven’t heard of, and that band you will never hear of.”

After leaving Godhead, Crain began performing with Hollywood Undead from 2008 until 2010. An online bio for Crain gives his nickname as Biscuitz and reads, “His musicality, diversity, and professionalism have kept him on the road as a touring musician for the last twelve years.” That same profile says that Crain has shared the stage with artists as diverse as Katy Perry and Linkin Park. 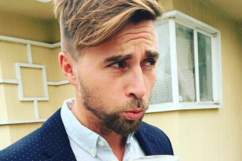 5. Just Like His Wife, Crain Is a Keen Equestrian

Both Crain and Daniels are equestrian enthusiasts, according to their social media pages. In 2010, Crain posted a photo to Facebook showing him and Daniels on their respective horses. His is named Danger Mouse while her’s is named Bailey.

The Smoking Gun reported in 2009 that Daniels was accused of beating up a former husband, Michael Mosny, because she was upset over how he had done the laundry. The charging documents indicate that Daniels was also angry that Mosny had not paid a bill that she had given him money to pay.

Daniels admitted to officers that she had thrown a potted plant in the sink, thrown their wedding album on the floor and that she had broke some candles. Daniels was ultimately released on a $1,000 after being booked. According to documents in the case, at the time Daniels was living in Tampa.

Loading more stories
wpDiscuz
0
0
Would love your thoughts, please comment.x
()
x
| Reply
One person who has remained silent during the Donald Trump/Stormy Daniels controversy is the star's long time husband.