Nasim Aghdam, the suspected mass shooter at YouTube’s headquarters in San Bruno, California, had a very active presence on social media, including accounts on Facebook and YouTube itself. Her YouTube channel has now been deleted, although you can see some of the key videos from it below, including one in which she criticized the company. Her Facebook page is also deleted, but you can see photos from it below.

One video was a parody of Taylor Swift:

Authorities say that, on the afternoon of April 3, 2018, Aghdam entered the YouTube complex with a handgun and opened fire, leaving a trail of three people wounded, before taking her own life with a self-inflicted gunshot wound. They are still investigating the motive and, although early news reports out of California reported that domestic violence was a possible motive, police now say that was not the case. Authorities revealed in a press release that Nasim Najafi Aghdam was the shooter and wrote, “The San Bruno Police Department is investigating a motive for this shooting. At this time there is no evidence that the shooter knew the victims of this shooting or that individuals were specifically targeted. Anyone with any information related to this crime is urged to contact the San Bruno Police Department at (650) 616-7100 or by email: sbpdtipline@sanbruno.ca.gov. Information can be left anonymously.” You can see her website here. On it, she refers to “Nasim, first Persian female vegan body builder” and quotes Thomas Edison as saying, “Until we stop harming all other living beings, we are savages.”

FacebookA photo on the Facebook page of Nasim Aghdam

On YouTube, Nasim Aghdam had an alter ego. She posted under the name Nasime Sabz on YouTube. She also had a website and Telegram page using that pseudonym. Some of her many videos are recorded in Farsi.

“Nasim the Persian Azeri female vegan bodybuilder, also animal rights activist promoting healthy and humane living. Nasim produced and launched the first Persian TV commercial and music video (Do You Dare) regarding animal rights and veganism through international Iranian satellite Television in 2010,” read the “About” section on her YouTube channel.

Here’s another of her social media videos.

Her YouTube channel has been deleted. She had more than 5,000 subscribers, and her videos had been viewed more than one million times.

In one video, she complained that YouTube “discriminated and filtered” her content. “In the video Aghdam says her channel used to get lots of views but that after being filtered by the company, it received fewer views. In a Facebook post from February 2017 Aghdam blasted YouTube saying, ‘There is not equal growth opportunity on You Tube,'” reported NBC Bay Area.

Other posts and videos referred to veganism, animal rights, cooking, and parodies. Indeed, Aghdam participated in protests surrounding the animal rights movement. She was quoted in 2009 by The Los Angeles Times as participating in an animal rights protest. “For me animal rights equals human rights,” the article quoted Nasim Aghdam, then 29, as saying, identifying her as “a construction company office manager from San Diego.”

“Just because they can’t talk doesn’t mean we should take advantage of them,” she also said, according to the article. That article’s lead says, “Two dozen animal rights activists — accompanied by four dogs — demonstrated outside Camp Pendleton today to protest the use of pigs in “live tissue” training for Marines and sailors learning how to treat battlefield casualties.”

The shooter’s Facebook page was basically an extension of her YouTube channel, and it contained many photos and videos that appear to duplicate those on YouTube, including some that were parodies. Her Facebook page has now been deleted too. Here’s what the header looked like:

You can see more of her videos below:

The mass shooting unfolded on the afternoon of April 3, 2018 and sent YouTube employees dashing for the exits of the large complex.

The shooter’s YouTube page is down, but here are screenshots of many of the videos that appeared on it:

Here are some other posts from the shooter’s social media accounts:

You can read more about Nasim Aghdam here: 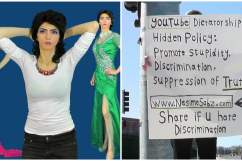