A Missouri Air National Guardsman was stabbed in the chest and left to die in an apparent road rage attack, the Lee’s Summit Police Department said in a press release. Cody Harter, 23, of St. Joseph, Missouri, was killed May 5, police said. The suspect fled from the scene and has not been identified.

Harter, a senior airman, served tours in Iraq and Qatar and recently helped with hurricane relief in Houston and Puerto Rico as part of his Air National Guard service, his family said. The reservist was stabbed once during the incident, which occurred about 7:30 p.m. in the northbound lanes of Missouri Route 291 at the merger to Interstate 470 just north of Colbern Road, Lee’s Summit Police said. Witnesses told police he was “possibly involved in a road rage altercation and that just prior to being stabbed they saw the victim’s truck stopped in traffic with another vehicle stopped in front of it.” The witnesses told police they saw two men arguing outside the vehicles, but were only able to give a vague description of the suspect vehicle after it fled following the stabbing, according to the press release. Police said drivers called 911 after seeing Harter stumbling into traffic and collapsing with a stab wound to his chest. Harter was pronounced dead at the scene.

“It was senseless. He’s been to war and back. And to die because someone was angry,” his mother, Kerrie Harter, said at a press conference Sunday. Harter said her son always drove 65 mph because he was frugal with his gas money. “I can only imagine that someone was upset because he wasn’t going fast enough. Is that a reason to take his life? And leave him there?”

Stumbling man spotted on 291 in Lee’s Summit. Died on scene. The victim is a W/M in his 20’s. @41actionnews pic.twitter.com/JocprsZDup

Harter had driven down to Kansas City to pick up a new lawnmower for his landscaping business and was on his way back home when he was killed. “He called his mom on the way home and said, ‘I love you. I’ll be home in just a bit,'” his father, Michael, said at the press conference on Sunday. Police released a photo of Harter’s truck, a 2003 maroon Chevrolet Silverado extended cab Z71, in hopes that anyone who saw it before the incident will come forward. ” Police are asking anyone that may have seen the altercation or observed the victim driving north on M-291 highway to call Police; you can remain anonymous at 816-474-TIPS,” the press release said. You can see Harter’s truck below:

“Our initial calls came in as possibly a fatality crash, we thought maybe a pedestrian had been hit by a car. It was later updated to possibly a shooting,” Lee’s Summit Police Sergeant Chris Depue told reporters at the press conference, where he stood behind Harter’s family and girlfriend. “When the officers got there they found it was a stabbing victim. Detectives have worked through the night, gathering leads, running down surveillance video from about a six-mile stretch from that area to help us bring this case to a conclusion.”

Harter’s mother said that her son was a loadmaster with the Missouri Air National Guard and was one semester away from completing his degree in technical engineering from Missouri Western State University. He also ran his own lawn care business and raced dirt bikes, his mother said. “He loved everyone. He would help anybody,” she told the newspaper. “He’d spend his weekends at the track, and he’d have so much fun. He even broke his finger in half one time, but he still got back on his bike.”

Harter posted on Facebook just hours before his death about his plans to find a place to ride his dirt bike. “Trying to get some laps in somewhere before the weekend? Any place open?” he wrote.

“He brought us great joy. He knew great joy. He knew love. Shelby on the left, that was his girlfriend, they were going to be married,” Kerrie Harter told reporters as her son’s girlfriend broke down crying. “He has a sister here that was his best friend. His first best friend. He was not just a number. He was a person. He is my love. He knew love from all of us. He knew adventure. He knew kindness. But now we know love and loss.”

Harter, who enlisted in 2012, was assigned to the Missouri Air National Guard’s 180th Airlift Squadron. Kerrie Harter said her son came from a military family. Both her and her husband served in the Air National Guard. He joined along with his friend, Armando, who was with the family at Sunday’s press conference. “We are a military family and we served proudly. And he wanted to do that as well,” Kerrie Harter said.

On the police department’s live stream of the press conference, one viewer, Sybil Hillyard, commented, “I’m the administrative assistant in the Engineering Technology Dept and saw Cody daily, he always had a smile and extremely polite young man. He was proud of his tattoos, showed them to me but he was more proud to be part of the military and told me about his deployments and often talked about riding at the track. He stopped in Friday to tell me to have a good summer. Great young man you raised, my prayers are with you all.” 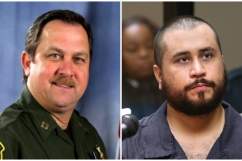 Cody Harter and his girlfriend.

His girlfriend, Shelby Berkemeier, told reporters that she talked to him just before he was stabbed to death. “He called me at 7:18 and we had a six-minute conversation. Shortly thereafter is when they reported him stabbed,” she said. Berkemeier and Harter’s family are grateful that Harter did not die alone. Witnesses rushed to his aid and stayed with him until authorities arrived, Harter’s girlfriend said in a Facebook post.

“This wonderful person reached out to me to let us know Cody wasn’t alone in his final moments. He was surrounded by people praying for him, and I can’t tell you how warm this made me feel in this terrible time. Bless everyone who was there,” Berkemeier wrote. She also shared the message that one of the women who stayed with him, Keri, wrote to her, which said, “I’m so sorry for your loss and such a senseless act. I want you and his parents to know that he was surrounded by people praying for him and talking to him when he passed. He wasn’t alone. I am so so sorry. It was important for my husband and I to find someone connected to him and let them know. I’m so sorry.”

Kerrie Harter told reporters, “I want to thank all the people that stopped and held his hand and prayed with him. My son did not die alone, even though whoever did this you left him out there to die alone. He did not, he was with people. Please if you know, just don’t let him be a number. Please come forward and say something. Anything.”

Berkemeier added, “That means the world to me. Thank you for reaching out. It just makes my heart warm in a dark place right now.”

She told reporters, “He was the love of my life.”

On Facebook, she wrote, “I don’t really have any words left. I’m so mad someone took you from us. My heart aches at the thought of every plan we had for out future that is now just gone. You were my ride or die, you were the love of my life. We were supposed to make it.”

Harter’s mother said her son would have turned 24 this year, in September. “He wouldn’t hurt a flea.” His father, Michael, said, “if there was a spider in the house, he would get a playing card and a cup and catch the spider and take it out and release it, because he didn’t want to kill it.”

His mother told reporters, “He brought Shelby home ducks for Easter and then raised them for awhile before they went to a farm. I have photos of him with the little ducks sitting on his shoulder. He loved tattoos, even though he knew his mother didn’t want him to get tattoos. So the first one he got was a heart that said ‘mom,’ because he figured ‘if I bought that one first, she wouldn’t mind the rest of them.’ I keep waiting for someone to tell me it’s not true. And I’m going to wake up from this, but I’m not.”

His family and girlfriend shared several stories about the kindness and love Cody showed people everyday, including strangers. His sister said one time he was driving with his girlfriend and saw an older woman outside in the snow. He stopped and shoveled her driveway. Another time he was at the dirt bike track and a little boy’s bicycle chain broke. He took the time away from riding his dirt bike to help fix it for him.

“He had the biggest heart,” his sister, Kylee, said.

Police say they believe they can crack the case with the help of witnesses and video surveillance. They are working to put together a description of the vehicle and suspect, but as of the Sunday press conference, those details remained unclear.

“Literally hundreds of cars would have passed by and saw this or maybe this disturbance take place on 291 Highway or possibly saw the actual incident along 470. What we’re asking people to do is come forward and help this wonderful family get closure and help us bring them justice in this case,” Sergeant Depue told reporters. He said that there is no indication that Harter had a weapon. “We think it’s truly just one of those stupid incidents of road rage where someone lost their temper and did something really stupid.I think what we are going to see is that all of our witnesses saw one little piece. When we can assemble those 100 pieces to this puzzle, it’s going to become very clear. There’s so many good cameras along that highway, there’s so many people who would have been driving by, there’s no reason we couldn’t solve this case quickly. ”

Harter’s family pleaded for anyone with information to come forward.

“If you saw anything, even if you think it was nothing, please call,” Kerri Harter said at the press conference. “Please call. They’ll put the pieces together. Let’s find who did this senseless act so that you’re not sitting here when it’s your child. Please call. Please.”

She encouraged people to go to her Facebook page, which you can go to here, and to see “the photos of my son and the videos of my son and let him make you smile and laugh. Please help us find who did this. I don’t want another mother to sit here.”

Michael Harter, Cody’s father, said at the press conference, “Any little detail would help the police in this investigation. Anything that you might think is not important or just trivial, anything you can add could help be a piece of this puzzle.”

Harter’s sister, Kylee Harter, urged his killer to turn himself in, telling reporters, “I think you’re a monster. Not only did you take my brother’s life, but you took everything from us. He brought so much joy to everyone he met. He was so funny, he was just the best person anyone could have ever met. I can’t even think of anything negative about him. … He did not deserve this. And we don’t deserve the pain that came with it.”

Berkemeier’s friends started a GoFundMe campaign to help his family. You can make a donation here. 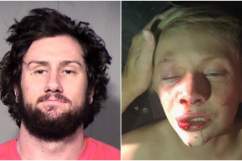