A missing Mississippi teen is possibly with a former Forrest County teacher who was arrested on April 10 on sexual battery charges, Hattiesburg Police say.

Oscar O’Neal II, 16, was last seen about 1 a.m. Monday, April 30, at his home in Hattiesburg, police said in a press release. His mother reported him missing that morning. Police suspect he could be with 30-year-old teacher Nicole Jackson, who was arrested after an investigation into an “inappropriate relationship” with a student. Jackson, of Purvis, taught at Earl Travillion Attendance Center.

1. Jackson Resigned From Her Teacher Position & Was Released on $10,000 Bail After Her Arrest on the Sexual Battery Charge on April 10

Nicole Jackson was arrested April 10 and charged with sexual battery by a person in a position of trust or authority, the Hattiesburg Police Department said. She was booked into the Forrest County Jail and released from custody on $10,000 bail.

She resigned from her job as an eighth grade reading and language teacher at Earl Travillion Attendance Center in the Forrest County school district after her arrest, the Hattiesburg American reports. Police said the investigation into Jackson began in mid-March when reports about a possible “inappropriate relationship” between her and a student were made. No other details about the case have been made public.

Forrest County School District Superintendent Brian Freeman told WMCA-TV that Jackson had worked for the district for several years. He said the district is cooperating with the investigation.

Oscar O’Neal II goes by the nicknames “Lil Pooh” and “Pooh Gotti,” according to his Facebook page and a post on Facebook by his father, Oscar O’Neal Jr. His father wrote on Facebook, “If u see my son please contact me or my wife Lisa Oneal.We got the police involved??his nickname is Lil Pooh but his real name is Oscar Oneal missing….????”

Hattiesburg Police said O’Neal was last seen at his house in Hattiesburg by his mother at 1 a.m. His family reported him missing at 7 a.m.

3. Jackson Is a Mississippi Native Who Graduated From William Carey University

Jackson’s maiden name is Nicole Shows, but it is not clear when she got married and if she is still married. Her Facebook profile and other social media have been taken down. Jackson’s mother previously worked as a secretary at Forest County Agricultural High School and she has other family members who work in the school district, according to social media posts.

4. She Had Worked at Earl Travillion Attendance Center & in the Forrest County Schools for More Than 5 Years & Was Named Teacher of the Month in November 2016

Jackson had worked at Earl Travillion Attendance Center for more than five years. Along with working with eighth grade students, she was previously a 7th grade teacher. According to a school newsletter, she won the November 2016 “Teacher of the Month” award at the school.

“Congratulations to ETAC’s Teacher of the Month Mrs. Nicole Jackson. Mrs. Jackson is our 7th and 8th grade Reading and Language Arts Teacher and has been part of the Tiger Family for 5 years now. The students and staff at ETAC appreciate the service Mrs. Jackson has given over the years and are thankful for her hard work and dedication she gives each day,” the newsletter stated.

5. Police Say Jackson, Who Is Wanted on a Warrant, & O’Neal Could Be in a Dark Blue Chevy Impala & Ask Anyone With Information to Call Them

HPD has issued a B.O.L.O. for 16-year-old Oscar O'Neal. He is believed to be with Nicole Jackson, 30, a former school teacher who is out on a $10,000 bond for sexual battery in a position of trust/authority. Could be in a dark blue Chevy Impala with plate # (FRA-4454). pic.twitter.com/UNuEzOokH3

Nicole Jackson is now wanted on a warrant, the Hattiesburg Police Department said, but it is not clear what additional charges she could be facing. Jackson and Oscar O’Neal II could be in a “dark blue Chevy Impala with Mississippi License Plate (FRA-4454),” police said in a press release.

“There is an active warrant for Jackson’s arrest, and she is wanted by the Hattiesburg Police Department,” police spokesman Ryan Moore said.

“If you have any information on their whereabouts, contact Hattiesburg Police or Metro Crime Stoppers at 601-582-STOP,” police said. 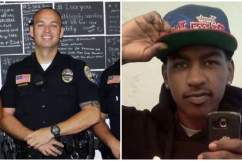