Shortly after the incident, Ayala started a GoFundMe page, asking for money to help cover the cost of orbital surgery. She also shared a graphic photo of her bruised face.

You can see her post from the site below.

“There’s two fractures in my left eye socket due to an aggressive hit, along with nose and jaw fractures. Since these bones are fractured they’re piercing into the back of my eyeball causing damage to an optical nerve and my eye itself. The left side of my face has lost some sensation, I cannot feel my upper lip on the left side, and same for my upper teeth on the left side. And as for my left eye’s vision, it’s diminishing as the days go by. It’s crucial I get the surgery otherwise my eyeball will die and the nerve connecting my lip/cheek and teeth will eventually die as well. I’d appreciate anything, this is a very strenuous obstacle that has been put into my hands. Also could use money towards my living situation and food. thank you,” reads her GoFundMe page.

Ayala has taken to social media to respond to XXXTentacion’s death.

“It isn’t real. Come back,” she wrote on Instagram.

She also took to Twitter to ask people to leave her alone.

“I know y’all don’t f*ck [with] me, but this isn’t about me. Just please stop tagging me in disrespectful threads and arguments. I honestly don’t care for any of the hype. I lost someone close to me. Leave me alone,” she tweeted. “It’s disgusting that people are speaking for me. I don’t care if no one cared about me however many months ago, I didn’t lose my life. He did. It’s permanent. I’m still here. like how do you think that makes me feel? Everyone expecting me to be relieved or happy?! No, i’m broken,” she added.

For a list of XXXTentacion’s crimes and charges related to this abuse case, check out the following article: 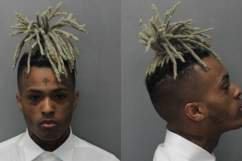 Loading more stories
wpDiscuz
0
0
Would love your thoughts, please comment.x
()
x
| Reply
Geneva Ayala posted a photo of her bruised face on her GoFundMe page. She has seen an increase in donations since XXXTentacion's death.