A 59-year-old man has been arrested in the 1988 cold case rape and murder of 8-year-old April Marie Tinsley in Fort Wayne, Indiana, authorities say. John D. Miller was identified using DNA and a genealogy database, a method that has been used in solving multiple murders in recent months, most notably the Golden State Killer case, according to police.

Miller, of Grabill, Indiana, was arrested July 15 on charges of murder, child molesting and confinement, the Fort Wayne News-Sentinel reports. Tinsley disappeared on Good Friday, April 1, 1988, and her body was found in a ditch in DeKalb County about 20 miles away. She was raped and choked to death, an autopsy found. The first grader was walking to a friend’s house to get an umbrella when she was abducted and killed, police said.

The search for Tinsley’s killer has gone on for more than 30 years and has attracted nationwide attention. It has been featured on crime TV shows ranging from “America’s Most Wanted” to a recent report on “Crime Watch Daily.”

The case has been investigated by the Indiana State Police, the Fort Wayne Police Department, the Allen County Sheriff’s Department, the FBI and other local police agencies over the years.

1. When Asked by Detectives If He Knew Why the Police Wanted to Talk to Him, John D. Miller Replied ‘April Tinsley’

When the Indiana State Police went to John D. Miller’s mobile home in Grabill, Indiana, on July 15, detectives asked him if he had any idea why the police wanted to talk to him, according to court documents filed in Allen County court. Police said, “John Miller then looked at detectives and said ‘April Tinsley.'”

The detectives told Miller that he was correct and said they had a match of his DNA profile to the DNA evidence left on April Tinsley’s body, according to the court documents. Miller was taken to the Fort Wayne Police Department to be interviewed about the case. Police said that when the detectives asked him to explain what happened to Tinsley, he replied, “I can’t.” He then admitted to the killing her, telling the detectives he had abducted Tinsley from Hoagland Street in Fort Wayne on April 1 and then took her to his trailer on Main Street in Grabill, according to the court documents. Miller told detectives he raped Tinsley and then killed her by choking her to death.

“John Miller told detectives that it took about 10 minutes for April M. Tinsley to die,” police said in the affidavit. Miller said he raped Tinsley’s dead body after killing her, according to the affidavit. Miller told detectives he drove Tinsley’s body to Spencerville, Indiana, and dumped her there on the morning of April 2. Miller said he killed Tinsley after raping her because he did not want her to report him to police.

Miller also told police that he drove by the area where he dumped the body when he did not see it on the news, according to the police report. He said he saw Tinsley’s shoe was in his car and threw it out into the ditch.

Police were able to identify Miller as a suspect using DNA and genealogical technology, according to court documents. The killer had left DNA on Tinsley’s body. DNA had also been recovered in 1990 and in 2004 on notes and in condoms that had been placed in Grabill and Fort Wayne by the killer as taunts. The DNA in those notes and the DNA from the crime scene matched. According to court documents, Indiana State Police Detective Brian Martin arranged for genetic testing to be done on the Tinsley evidence by Parabon Nanolabs in Virginia.

The testing company worked with genealogist CeCe Moore, who has assisted in several high profile cold cases that have been solved in 2018, and narrowed the suspect down to John D. Miller and Miller’s brother. Moore used a public genealogy database to identify them. That same database was used to catch the alleged Golden State Killer, James DeAngelo, earlier this year. Moore also assisted in the arrest of a Pennsylvania DJ, Raymond Rowe, in the 1992 rape and murder of a teacher, Christy Mirack, along with two murders in Washington state.

After Miller was identified as a suspect police said they began surveillance on him, according to court documents. They discovered he was the lone occupant of a trailer home on Main Street in Grabill. On July 6, police covertly searched Miller’s trash in an effort to find any loose items with his DNA on them, according to the affidavit. Police said they found three used condoms. The DNA was sent to the Indiana State police laboratory and on July 9, the lab confirmed that the DNA profile extracted from the used condoms matched the DNA profile recovered from Miller’s body, according to court documents. 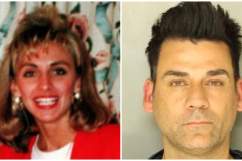 2. After Tinsley Was Killed, a Note Was Left on a Barn Saying, ‘I Kill 8 Year Old April M Tinsley Did You Find Her Other Shoe Haha I Will Kill Agin’ & in 2004 Notes Were Left Near 3 Condoms by a Person Claiming to Be Her Killer

Police said the DNA testing was also used to confirm that two messages left by a person claiming to be the killer were also connected to John Miller, according to court documents. On May 21, 1990, two years after April Tinsley was killed, police investigated a note that was scrawled on a barn in Fort Wayne taking credit for her killing. The note said, “I kill 8 year old April M Tinsley did you find her other shoe haha I will kill agin,” according to police.

In 2004, police were dispatched to three locations, one in Fort Wayne and two in Grabill, where used condoms were found, one at each of the scenes, according to court documents. Notes were also found with the condoms stating that the person who left them had killed Tinsley.

The condoms and notes were left on young girl’s bicycles and in a mailbox, with taunts telling them they would be the next victims, along with photos showing the nude lower half of a man, police said. One of the notes said,””Hi honey. I been watching you,” according to police. Another said, “I am the same person that kidnapped, raped and killed April Tinsley. You are my next victim.”

According to the affidavit, the DNA testing conducted in 2018 confirmed that the DNA left behind in the condoms used to taunt investigators and Tinsley’s family was a match to DNA recovered from condoms found in Miller’s trash. 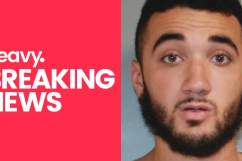 3. Neighbors Say Miller Kept to Himself, but Had a Bad Temper, Would Kick & Throw Objects & Used Foul Language

Community Responds to April Tinsley Case ArrestDozens of messages are written on the sidewalks by April Tinsley's memorial garden at Masterson and Hoagland avenues in Fort Wayne. The signs of support showed up just hours after the news broke about an arrest finally being made in the case.2018-07-16T10:51:38.000Z

Little is known about John D. Miller. He has lived by himself at the home in Grabill for several years, according to local news reports. Neighbors told The Journal Gazette that Miller was not well known in the area and kept to himself. David Roberts, his next-door neighbor, told the newspaper that Miller did have a bad temper. He said he had seen Miller using foul language and kicking and throwing objects.

Emily Almond, a local resident, said she is now wondering whether she ever crossed paths with Miller, telling the newspaper, “It’s almost horrifying he was here.” Another Grabill resident, Dawn Muller, told the newspaper, the situation is “very concerning.” The newspaper reports a passerby said near the mobile home, “It can’t be happening in the little town of Grabill, can it?”

“I would drive every morning from work and I would see him get out of his car, and I couldn’t imagine that it would even be him. It gives me chills up and down my spine,” Dawn Muller told WPTA-TV. Her father, David Clark Sr., told the news station, “He’s running around free here for 30 years, and today I think he got what he deserved.”

Muller told WANE-TV, “He’d always had a mean look on his face. He would use swear words a lot when he would get mad.” 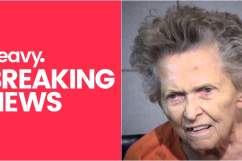 4. Miller, Who Worked at a Factory Until He Punched & Broke a Time Clock, Has No Criminal Record Except for Traffic Citations

John D. Miller does not have a major criminal record, according to WANE-TV. His only run-ins with the police over the many years he has lived in Grabill were traffic tickets, for speeding and failure to stop at a stop sign, according to the news station.

Miller worked at a fiber glass factory in Grabill from the 1970s to the 1990s, WANE-TV reports. It was then known as Eagle Pitcher Plastics and is now R3 Composites. Former co-workers told the news station Miller did not have many friends, had poor hygiene and had a bad temper. He got fired from the factory after punching and breaking a time clock, WANE reports. He has more recently worked at Walmert in Kendalville, the news station reports. He worked the overnight shift in electronics, co-workers said, but was not well known by fellow staffers.

“We didn’t know anything about him. I sure didn’t,” a co-worker told the news station. The co-worker added that Miller was hunched over when he walked, had a speech impediment and had anger issues. “I’ve heard him beating on equipment because it wasn’t working right and when somebody needed help, he would complain about them needing help.”

Another co-worker at Walmart told the news station, “It’s just very shocking. I kind of have that sick feeling. There’s butterflies in my stomach. I don’t know what to think. I would have never known. We’re still in shock that this happened and that none of us knew about it.”

5. Miller Appeared in Court on July 16 & Tinsley’s Family Members Said He Is the ‘Monster’ They Expected Her Killer to Be

John D. Miller appeared in court for the first time on July 16, 2018, and an Allen County judge found probable cause for his arrest, the Fort Wayne News-Sentinel reports. He is being held without bond and the Allen County Prosecutor’s Office has until July 19 to file formal criminal charges against Miller, according to the newspaper. He is scheduled to appear in court on that day. The newspaper reports that Miller wore navy blue jail clothing and was handcuffed. He sat quietly during the hearing. According to WANE-TV, he only spoke once, to say “yes,” when asked by the judge if he understood he was being held on charges of murder, child molesting and criminal confinement.

April Tinsley’s parents were not at court, but other family members were. Teresa Tinsley, April’s aunt, told the newspaper, “I just wanted to get up and go over and slap him one.” She added, “I expected a monster, which is exactly what I (have) seen.”

She was joined in court by her daughter and her niece’s husband, and they wore shirts with “Never Forgotten, Always Remembered” on the front and “April Marie Tinsley 1980-1988” on the back, according to the newspaper. Teresa Tinsley said April’s parents were too upset to attend, but plan on being at future hearings.

Miller is being held at the Allen County Jail.

“Thank God for DNA. If not for DNA, I’m not sure they would have gotten him,” Teresa Tinsley told the News-Sentinel. “All we can do is wait until he comes back (to court) and justice is done.” 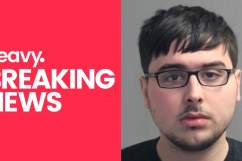