Jonathan Copeland, the man accused of fatally shooting Milwaukee police officer Michael Michalski on Milwaukee’s north side, had a long and lengthy criminal record before he was arrested for killing Michalski.

The shooting happened near the corner of 28th and Wright in the Metcalfe Park neighborhood, according to Police Chief Alfonso Morales. Police responded to a call about a suspect wanted on drug and gun violations on July 25. Officers approached and encountered the suspect entering a residence before shots were fired at officers. During the exchange, “one of our members was injured,” Morales said.

Our thoughts & prayers are with the family and friends of Police Officer Michael Michalski, a 17-year veteran of @MilwaukeePolice who was killed yesterday while trying to arrest a wanted suspect. #NeverForget pic.twitter.com/4Xj9Q9GhiG

Copeland was taken into custody in the 2400 block of N. 28th St. on a tentative charge of first-degree intentional homicide, according to arrest logs. A warrant was issued for Copeland’s arrest May 18 after he was charged with possession with intent to deliver heroin, court records show.

Morales said during a press conference than Copeland was being investigated for parole violations, possession of heroin, and domestic abuse charges when he opened fire on police officers.

During the press conference, Morales stated that they believe Copeland fired at Michalski and other responding officers until he “ran out of ammunition,” at which point he “gave up.”

A review of court records by Heavy confirmed Morales’ claim that Copeland had a long criminal record, dating back to his juvenile years. Although his juvenile records aren’t accessible to the public, several past criminal cases involving burglary, drugs and weapons were found on Wisconsin Circuit Court Access.

Here’s what we know about Copeland’s criminal history:

The summary of Copeland’s prior offenses can be found on Wisconsin Circuit Court Access, often abbreviated to CCAP. His juvenile records are not included at this time.

Morales said during a press conference that Copeland was being investigated for parole violations, possession of heroin, and domestic abuse charges when he opened fire on police officers. CCAP doesn’t show the domestic abuse charges Morales mentioned at this time, and the homicide charges Copeland is facing regarding the June 25 incident have yet to be filed. Heavy will update as more information becomes available.

Copeland Goes By ‘Amir Copeland’ on Facebook & Posted Several Videos of His Wife, Child & Tributes to His “Grams”

Copeland goes by the alias ‘Amir Copeland’ on Facebook. His profile is filled with pictures of him and an infant child, snack foods, and two pictures with different dogs.

A video showing a bed covered in rose petals and a five minute long conversation with his then-wife Tiffany Mcafee, along with several other miscellaneous videos of the same infant child can be found on his page.

The only page Copeland liked on Facebook was “ShumpWorkouts” and his page has little else available to the public. A live video of his grandmother’s headstone can be seen, with the caption “Happy Mother’s Day Grams,” and several public updates that either tag, involve, or were allegedly “hacked” by his wife Mcafee.

On May 10, which was the last update besides the video to his grandmother, he wrote: “All I can say is I love my wife Tiffany Monique Mcafee AND NOBODY WILL EVER TAKE HER PLACE”

He wrote another tribute to his grandmother back in March, stating: “”I REALLY WISH MY GRANDMA WAS HERE TO SEE HER BABY. I LOVE GRAMS”

Our prayers are with the family, friends and colleagues of @MilwaukeePolice Officer Michael Michalski who was shot and killed last night while protecting the people of Milwaukee, WI. He was a 17-year veteran of the department and is survived by his wife & three sons. #NeverForget pic.twitter.com/sxkM2yipU4

Michalski was also a member of the Special Investigations Division with the MPD and court records show he was a bicycle officer last year. The MPD wrote a post on Facebook six years ago honoring Michalski and another officer for finding four pounds of marijuana during a traffic stop.

Michalski is remembered by Police Chief Morales as a friend who was “well loved” by the Milwaukee Police Department.

“It’s a difficult time for the police department. He’s a 17-year veteran who was well loved by the department and a friend of mine,” Morales said.

A witness gave an account of what happened to Fox 6, claiming Copeland allegedly  yelled “I’m not going back to jail,” before unleashing a spray of bullets on responding police officers.

“Apparently it was a stop, and the guy hopped right out of the car and he’s like ‘I’m not going back to jail,’ and he got to shooting out the gate. Just got to shooting. And not only did he hit the officer, but he hit other innocent bystanders that was in the area. As of now, the officer, it don’t look like he’s in great condition right now. It don’t look like he’s gonna make it, to be honest. I stay right there on the corner, so I actually seen everything unfold from beginning to last. It was on the next block. I don’t know if they was getting ready to run into his house, or if it was just a traffic stop, but you could see the man get right out the car and just get to shooting and yelling ‘I’m not going back to jail. Y’all going to have to kill me.” 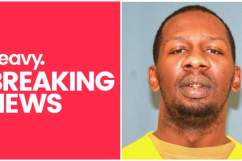 Read More
Crime, Milwaukee
Jonathan Copeland has a long criminal record, including drug, weapon and theft charges, as well as a homicide charge after fatally shooting a Milwaukee police officer.