A Colorado man who has been charged with the murders of his pregnant wife and two young daughters gave a chilling interview with a local news station after they had been reported missing. Chris Watts, 33, was arrested Wednesday night in the deaths of Shanann Watts and their 3- and 4-year-old daughters, Bella and CeCe Watts, the Frederick Police Department said. They had been missing since August 13.

Watts was interviewed by Denver7 on Tuesday about the disappearance of his wife and daughters. During the interview, Watts smiled and laughed and appeared to struggle while talking about them being missing.

In the interview he talked about how police were searching his house and trying to find his wife and daughters. Watts told the news station his wife had come home from a work trip about 2 a.m. and he left about 5:15 a.m. for work and she was still there. He also claimed he had tried to contact his wife the day she was reported missing. Shanann Watts was reported missing by her friend, not by her husband.

“I just want everybody to come home,” Chris Watts said. “Wherever they’re at come home. That’s what I want.” When asked by the reporter if he had fought with his wife before she disappeared he said, “It wasn’t like an argument. We had an emotional conversation, I’ll leave it at that. But I just want them back. I just want them to come back. And if they’re not safe right now, that’s what’s tearing me apart. Because if they are safe, they’re coming back. But if they’re not, this has got to stop. Somebody has to come forward.”

You can watch the full interview with Denver7 below:

He also told told the “Today” show, “I don’t feel like this is even real right now. It’s like a nightmare I can’t wake up from. Knowing they could be in trouble, it’s earth-shattering.”

Chris Watts has been charged with three counts of first-degree murder and tampering with evidence. He is being held without bail at the Weld County Jail. Police have not released any details about a possible motive or when, where and how Shanann and her daughters were killed.

Chris Watts, now accused of killing his wife and children, used these words to describe his daughters on Tuesday (day before his arrest). #9news pic.twitter.com/b0pUHOobOZ

Shanann Watts’ brother, Frankie Rzucek, wrote on Facebook on Wednesday, “That piece of sh*t may he rot in hell. He killed (my) pregnant sister and my two nieces. Her husband Chris watts admitted to murdering my family. … We just found out she was pregnant with a baby boy and his name was going to be Nico.”

He added, “I just want to know why. My precious family. Bella, Celeste and her just found out unborn son Niko. I just want 30 seconds alone with that heartless psychopath. May Satan have mercy on his soul. The cops drug their feet. He was the only one with them and backed his truck into the garage. Doesn’t take a genius to know who was suspect. My blood is boiling and the pain and anger and sadness I have in my heart. Nothing absolutely nothing would get in my way of taking away his life like he did mine and my ENTIRE FAMILY.”

You can read more about Chris Watts and the case here: 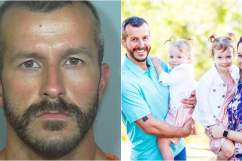 Read More
Breaking News, Colorado, Crime, Police
wpDiscuz
0
0
Would love your thoughts, please comment.x
()
x
| Reply
Chris Watts, who is accused of killing his pregnant wife, Shanann Watts, and their two daughters, gave a chilling interview about them while they were missing. Watch the full video here.