Getty Press Secretary Sarah Sanders refused to answer whether the press was "the enemy of the people" on Thursday afternoon.

On Thursday afternoon during a White House briefing, White House Press Secretary Sarah Sanders refused to respond when reporters asked if “the press was the enemy of the people.”

According to Aaron Blake, senior political reporter for The Washington Post, Sanders was asked three separate times by CNN’s Jim Acosta if she thought the press was the enemy of the people, and she declined to answer all three times.

The entire interaction between Acosta and Sanders can be seen below:

CNN's Jim Acosta asks Sarah Sanders about Trump's comments that the media is the "enemy of the people": "You did not say … that the press is not the enemy of people" pic.twitter.com/H3TJCFwiON

Sanders said, “The President has made his position known…it’s ironic, Jim, that not only you and the media attack the President for his rhetoric, when they frequently lower the level of conversation in this country. Repeatedly, repeatedly, the media resorts to personal attacks without any content other than to incite anger. The media has attacked me personally, on a number of occasions, including your own network. [They] said I should be harassed as a life sentence, I should be choked…when I was hosted by the Correspondents’ Association, of which almost all of you are members, you brought a comedian up to attack my appearance and call me a traitor to my own gender.”

At this point, several reporters began to speak, but Sanders continued. “In fact, as far as I know, I’m the first Press Secretary…that’s required Secret Service protection. The media continues to ratchet up the verbal assault of the president and everyone in this administration. And certainly we have a role to play, but the media has a role to play for the discourse in this country, as well.”

After asking her once, Acosta followed up with Sanders (as seen in the video above), saying, “You did not say in the course of those remarks that the press is not the enemy of the people.”

An extraordinarily disappointing moment by @PressSec just now… Her inability to acknowledge the role POTUS has played in all of this media bashing only hurts her own credibility…She had a chance to defend the institution and take the high ground and show leadership, instead..

Acosta continued, “For the sake of this room, this democracy, this country, all the people around the world are watching what you’re saying, Sarah, and the White House, the President of the United States should not acknowledge us as the enemy of the people, his own daughter acknowledges that, and all I’m asking you to do, Sarah, is to acknowledge that right now and right here.”

Sanders replied, “I appreciate your passion. I share it. I’ve addressed this question. I’ve addressed my personal feelings. I’m here to speak on behalf of the President, and he’s made his comments clear.”

Acosta tweeted soon after, “I walked out of the end of that briefing because I am totally saddened by what just happened. Sarah Sanders was repeatedly given a chance to say the press is not the enemy and she wouldn’t do it. Shameful.”

I walked out of the end of that briefing because I am totally saddened by what just happened. Sarah Sanders was repeatedly given a chance to say the press is not the enemy and she wouldn't do it. Shameful.

Sarah Huckabee Sanders is magnificent. Look up her answer to Jim Acosta on whether the press is the "enemy of the people."

On February 17, 2017, Trump explicitly called the “media” the “enemy of the American people” in a tweet, directly citing The New York Times, NBC, CBS, ABC, and CNN in his implication.

Trump’s attack of the media in general as a system of “fake news” has been one of his most frequent rallying cries. Acosta is correct that Ivanka Trump has tried to correct her father’s statement. On Thursday, a few hours before Sanders’ press conference, Ivanka Trump was asked a similar question about whether she agreed with her father’s description of the press.

Via The New York Times, Ivanka Trump said, “No, I don’t.”

She continued, “I’ve certainly received my fair share of reporting on me personally that I know not to be fully accurate. So … I have some sensitivity around why people have concerns and gripe, especially when they sort of feel targeted. But no, I do not feel that the media is the enemy of the people.” 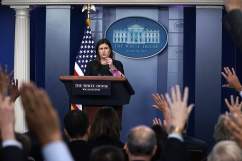 Loading more stories
wpDiscuz
0
0
Would love your thoughts, please comment.x
()
x
| Reply
In a White House press conference on Thursday, Sanders was repeatedly asked to clarify whether the press was the enemy of the people, and she refused to answer.