Getty The Space Force logo options were revealed to Trump supporters, and Twitter has had a whole lot to say about them ever since.

A campaign email offering design ideas for the new Space Force logo began to circulate on Thursday, August 8, and the internet had a swift and brutal reaction.

According to The Independent, screenshots of an email from Trump’s campaign manager were revealed, in which supporters of Trump’s campaign were invited to choose their favorite logo for the Space Force.

The email read, “President Trump wants a SPACE FORCE — a groundbreaking endeavour for the future of America and the final frontier,“ read the e-mail from Brad Parcale according to screenshots. ”As a way to celebrate President Trump’s huge announcement, our campaign will be selling a new line of gear.”

And then there were the logos—and Twitter was not kind to them. Here are all of the best memes & reactions to the Space Force logo ideas.

The logo ideas ranged from some that looked extremely similar to NASA’s logo, to others that hinted at future explorations to Mars. Shortly after Pence held a press conference detailing the plans for Space Force on August 8, Trump tweeted, “Space Force all the way!”

Other Twitter users weren’t so positive about the logo ideas. Emotions ranged from confused, to shocker, to straight out hysterical— and now, it just seems like a straight-up competition for who can have the most clever response to the Space Force logo idea. 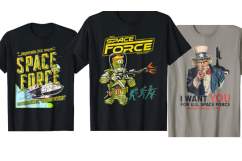 I made a Space Force logo. I call it AND OVER 1,000 ARE DEAD pic.twitter.com/Xv2kPbVw8D

My entry for Space Force logo.

Motto: A black hole you throw money into. pic.twitter.com/AdKUwdFf9Y

I wore my NASA meatball logo t-shirt and people were giving me the side-eye. I swear it wasn't an endorsement of Space Force.

For some reason, my design for the #SpaceForce logo didn't make it into either @VP 's speech or @realDonaldTrump 's fundraising email. ? pic.twitter.com/GSIzqyTd1g

“DO YOU WANT TO CREATE THE SPACE FORCE LOGO?” pic.twitter.com/o3kPXVsJBb

Got you your Space Force logo right here. pic.twitter.com/zhDQp2YRr7

I surprisingly like the new Space Force logo. pic.twitter.com/97jdQIOC9y

Hey guys, I came up with a logo for this new US Space Force. Let me know what you think. pic.twitter.com/ZFJBJ3SVnD

Don Jr all sad after Dad rejects his #SpaceForce logo, which is a tracing of the Leprechaun 4: In Space VHS cover pic.twitter.com/aVob4JjsaL

Read More
Breaking News, Donald Trump
The Space Force logo options were revealed to Trump supporters, and Twitter has had a whole lot to say about them ever since.