A Tennessee man has been arrested after police say he used racial slurs, threatened staffers and caused thousands of dollars in damage during an outburst at the Nashville Greyhound bus station on Sunday. David Shepherd, a 36-year-old from Nashville with a lengthy criminal record, was taken into custody after the incident, WZTV reports.

The incident happened abut 11:20 a.m. on September 9 and was streamed live on Facebook by a woman who was waiting at the bus station. Shepherd remains in custody on several charges, including two felonies. It is not clear if he has hired an attorney. He was arrested by the Metro Nashville Police Department at the bus station at 709 5th Avenue South after the meltdown, the news station reports. In the video, Shepherd tells the woman who was filming to “put it on YouTube,” before eventually surrendering to officers who responded to the scene.

1. The Facebook Live Video Shows Shepherd Ranting, Smashing Ticket Machines and Using a Stanchion to Smash the Glass Doors of the Bus Station

During the incident Sunday morning at the Nashville Greyhound station, David Shepherd used racial slurs and derogatory language while yelling at employees and other patrons during his rant, according to police. Part of the incident was streamed on Facebook Live by Lexx Badd. You can watch the nearly 10-minute video above.

In the video, Shepherd can be seen yelling at Greyhound bus station employees as other people clear out of the area. He then goes to a ticket machine and slams it to the ground, before knocking over signs and cursing at the employees. After arguing with employees and a woman who appears to be a security officer, Shepherd can be seen picking up a metal stanchion he had earlier knocked to the ground, and swinging it into glass windows, breaking them. As people scattered again, Shepherd picked up the stanchion and slammed it through the glass door multiple times, shattering the glass. He then kicked the glass before walking away. Someone can be heard yelling, but it is not clear if anyone was injured. He then slammed over a sign and picked up the stanchion, walking toward people before throwing it down.

Shepherd then left the bus station while the woman continues to film. He can be seen in the video talking to people outside of the Greyhound station. Police arrived on the scene about seven minutes into the video. Shepherd can be seen in the video holding his arms in the air as police arrive and handcuff him. The video ends with him being put into the back of a police cruiser. 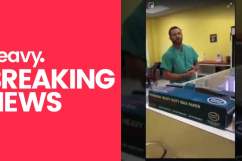 2. Police Say Shepherd, Who Was Intoxicated, Was Upset Because He Couldn’t Buy a Ticket Over the Phone

Police said in the arrest affidavit that David SHepherd became upset when he was told he couldn’t buy a ticket over the phone and was asked to leave the Greyhound bus station, WZTV reports.

Shepherd appeared to be intoxicated and had a strong odor of alcohol emanating from his breath, bloodshot eyes and was slurring his speech, police said in the arrest affidavit, according to WZTV.

According to Fox 13 Memphis, Shepherd kicked the window with his leg after smashing it with the stanchion, causing injuries to his leg. It is not clear if he received medical treatment.

3. Shepherd Has a Lengthy Criminal History With Dozens of Arrests Dating Back to 2000, With Convictions Including Assault, Disorderly Conduct, Theft & Several DUIs

David Shepherd seen in the video.

David Shepherd has a lengthy criminal history in Davidson County, Tennessee, with several arrests and convictions in the Nashville area dating back to 2000, when he was 19, online records show. Shepherd’s record includes convictions for assault, disorderly conduct, theft and several driving under the influence and public intoxication offense. He also has several convictions for driving with a revoked license and probation violations.

His most recent conviction was on February 23, 2018, when he was sentenced to six days in jail, which he had already served, for driving iwth a revoked license.

4. He Was Charged With Felony Vandalism, Aggravated Assault With a Deadly Weapon, Trespassing & Public Intoxication After the Bus Station Incident

Shepherd was charged with aggravated assault with a deadly weapon intentionally or knowingly and felony vandalism causing $10,000 to $60,000 in damage, according to Davidson County court records. Both charges are felonies. He was also charged with public intoxication and trespassing, which are misdemeanors.

If convicted of aggravated assault, Shepherd could face from one to six years in prison on the class E felony. The vandalism charge is a class C felony that carries a potential prison sentence of three to 15 years in prison. The misdemeanor charges both carry potential jail sentences of up to 30 days in jail.

David Shepherd seen being put into a police vehicle.

Shepherd is being held on $20,500 bail ($10,000 for each of the felonies and $250 for each of the misdemeanors) at the Davidson County Jail, according to online records. He was booked into the jail on September 9 just after 6 p.m., records show.

Court records show that the case against Shepherd is still pending and he is scheduled to appear before Judge Aaron Holt for a bail review on September 12 in the Birch Building courthouse. It is not clear if he has hired an attorney.