Getty Some of John McCain's children with wife Cindy.

The late Senator John McCain was many things. He was a war hero, a Senator, and a presidential candidate. He was also a dad, and judging from his children’s quotes about him, he was a beloved one.

Today we lost our hero, our friend, our mentor, our father, our grandfather and our husband. Together we mourn and together we go on. pic.twitter.com/KZZ53fgGza

“We are a normal family just like everyone else,” Bridget once said of her dad. Speaking in 2008, she added to Scholastic.com, “My Dad’s best achievement is being a dad and also running for president at the same time. He always puts family first!”

Of those children, three – Douglas, Andrew and Bridget McCain – are adopted. Doug McCain is a pilot for a major airline, Andrew McCain works for Cindy McCain’s family business, and Bridget McCain has studied and worked at Arizona State University.

John McCain passed away at the age of 81 from brain cancer with his family at his side. His family played a prominent role during the memorial services scheduled to honor the late senator and war hero. In the photo below, you can see Andrew and Doug McCain sitting behind McCain’s widow, Cindy, and their sibling, Jack (who is also called John), at the first memorial service.

Three of John McCain’s four sons with his wife Cindy.

Cindy McCain, wife of late US Senator John McCain, Republican of Arizona, walks with US Secretary of Defense James Mattis after arriving at Joint Base Andrews in Maryland, August 30, 2018.

“Our family is immensely grateful for the support and kindness of all his caregivers over the last year, and for the continuing outpouring of concern and affection,” a statement released by the McCain family following John McCain’s death said.

When her father died, Meghan McCain, a co-host on the View and one of McCain’s best known children, released a lengthy statement praising him as a father. You can read it in full above.

“All that I am is thanks to him,” she said. “His love and his care, ever present, always unfailing, took me from a girl to a woman.” Meghan also gave a tear-filled eulogy at the National Memorial Service for her dad. His daughter, Sidney, gave a reading from 2 Corinthians 5:6-8.

The McCain family at the September 1, 2018 memorial.

“His love was a love of a father who mentors as much as he comforts. He was endlessly present for us,” Meghan McCain said.

Although McCain’s daughter Meghan McCain did not mention the president by name, to many in the room, the subtext was clear from her comments during her eulogy. “America does not boast because she does not have need to. The America of John McCain has no need to be made great again, because America was always great,” she said, earning a round of applause despite the somber environment.

Meghan added: “The real thing, not cheap rhetoric from men who will never come near the sacrifice he gave so willingly, nor the opportunistic appropriation of those who lived lives of comfort and privilege.”

McCain’s oldest daughter, Sidney, has previously commented about how tough it was when John McCain divorced her mother, his first wife, Carol. However, over the years, the rift seems to have healed.

“I was very happy for him, and you could kind of see it coming,” Sidney told CNN of her dad’s decision to run for president.

You can see Meghan’s eulogy in full here: 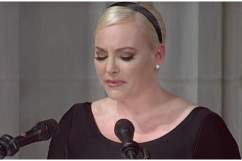 Doug McCain is 58-years-old. He once told The New York Times that his father was kept happy if he got good grades, played sports, and followed a few basic rules while growing up. He also told the Times in 2007 that his dad tried to protect the children’s privacy.

“I think he’d prefer the family kind of stayed private,” Douglas McCain told The Times. “I just think he is a big believer in individuals doing their own thing.”

Jimmy McCain, another of McCain’s sons, read one of his father’s favorite poems at the national memorial service.

John McCain loved this poem and read it at his father’s funeral. His son Jimmy will read it shortly at the National Cathedral. McCain’s father taught it to him; McCain taught it to his sons. pic.twitter.com/tSG8MtmCZ8

Jack McCain, who, like Jimmy, has served in the U.S. military, wrote of his father on Twitter: “It is not the man that was great, but instead it was his desire to serve a cause greater than himself that defined his life. To me, he was a giant, but to him he was an imperfect servant of the nation he loved deeply. Fair winds, following seas, and clear skies.”

“I hope I’ve been a loving father,” John McCain said in 2008. “My children are probably better qualified to make that assessment, but I’m certainly proud of them and what they’ve done in life—all seven of them.”

Before he married Cindy McCain, John McCain was married to Carol Shepp McCain, his first wife. Carol was the wife who waited faithfully for McCain during the years when he was a POW in Vietnam. When they were married, John McCain adopted Carol’s two sons from her previous marriage – Douglas and Andrew, ABC News reported.

John and Carol divorced in 1980. McCain adopted Doug and Andrew in 1965, had Sidney with Carol in 1966, and was captured by the Vietnamese a year later, spending 5 and a half years as a POW, People Magazine reported. Their birth father was a man named Alasdair E. Swanson, who had also attended the U.S. Naval Academy.

Service in the U.S. Navy is a McCain family tradition, and Douglas McCain has helped carry on that legacy. According to The New York Times, he served as a pilot in the U.S. Navy. Andrew works for Cindy’s family company. After getting an MBA from Vanderbilt, Andrew McCain became an executive in the family distributor company.

Specifically, Andrew McCain is the President and Chief Operating Officer for Hensley Beverage Company. He is the only one of John McCain’s four sons to not serve in the U.S. Military. A Vanderbilt bio on Andy McCain says, “Andy’s responsibilities consist of overseeing all aspects of the company which includes managing the operations; finance; treasury; accounting; strategic planning; information technology; and sales and marketing functions of the company. Andy received his Bachelor of Arts in Mathematics, 1984, and an MBA, 1986, both from Vanderbilt University.” He also serves on numerous charitable boards.

Jack and Jimmy, McCain’s two younger sons with Cindy McCain, have also served in the U.S. military, Jack in the Navy and Jimmy in the Marines and Army. Jimmy was a teen when he enlisted, and his mother had to sign the consent forms. He has served in Iraq and Afghanistan.

“We really never talk about our sons. We have two sons in the military but we never talk about it, if that’s all right. I am so proud of both of them,” John McCain told Fox News of Jimmy and his brother, Jack.

Flying has remained in Douglas McCain’s blood, and he is currently a captain for American Airlines, according to ABC.

The New York Times article described how Douglas, Andrew, and Sidney grew up in childhoods dominated by John McCain’s absence. They grew up in Florida in a Naval community while John McCain was a prisoner of war in Vietnam, according to the newspaper.

Bridget McCain Said John Would Have Made a Great President

Bridget McCain thought her dad would have made a great president. She gave an in-depth interview to Scholastic.com in which she gave insight as to how she saw her father.

“My Dad has proven himself to be capable to be the president. If he wins, he will be great at it!” Bridget said to the magazine. She added, “War is an important issue for our country and our nation. My dad wants to support the troops in Iraq and he hopes they will come home safely.”

Bridget McCain was born in Bangladesh. Cindy McCain met Bridget as an infant through humanitarian work. According to Town and Country, Cindy was touring an orphanage in that country in 1991 when she noticed Bridget, who “suffered from a severe cleft palette as well as a congenital heart condition.”

GettyBridget McCain and her brother.

Deeply moved, Cindy brought the child back to the United States with her – without telling John McCain – and Bridget was soon adopted and blended into the McCain brood. According to People Magazine, the McCain children are all protective of Bridget, who has had surgeries to repair her birth defects.

Bridget was adopted from the Sisters of Charity of Mother Teresa Children’s Home in Bangladesh. John McCain spoke about Bridget’s adoption to DadMag.com, saying, “Well it was primarily my wife’s Cindy’s idea. She was in Bangladesh and she and some of the medical personnel visited Mother Theresa’s orphanage to try and help the children there. There were two little baby girls there. One had a heart problem the other a severe cleft palate. Cindy was very concerned about their ability to survive and their need for medical treatment, so she decided to bring them here for medical treatment. She fell in love with both of them. We decided to adopt Bridget. Two close friends of ours, adopted Mickey, the other child.”

When Cindy came back home, she told John, “Say hello to your new little daughter,” he recalled to the magazine. The family quickly forged a tight bond. Bridget told Scholastic.com that her favorite family tradition was Christmas get togethers in which the family sang carols and lit hundreds of candles.

Loading more stories
wpDiscuz
0
0
Would love your thoughts, please comment.x
()
x
| Reply
John McCain's children have said many moving things about their dad. Read some of their quotes about their father.