An FBI agent was shot by a booby-trapped wheelchair while searching an Oregon property that was rigged by the homeowner with home-made weapons, including a hot tub set up to roll down a hill at intruders like the boulder in a famous scene from “Indiana Jones and the Raiders of the Lost Ark,” federal authorities say. The agent was hit by a shotgun shell in the leg, but survived.

Gregory Rodvelt, the 67-year-old homeowner, was supposed to turn the property over as part of a court order in an elder abuse case that found he been neglecting his 93-year-old mother. The incident happened September 7 in Williams, Oregon, a small town in Josephine County. FBI agents were asked by an attorney tasked with taking possession of the property to search the house because of a sign warning that the home was protected by “improvised devices,” according to court documents. Before entering the property, FBI agents and Oregon State Police bomb technicians noticed a hot tub that had been left at the top of a hill near a gate.

“Upon closer examination, the technicians discovered that the spa was rigged in such a manner that when the gate was opened it would activate a mechanical trigger that would cause the spa to roll towards the person at the gate much like a scene from the movie ‘Indiana Jones – Raiders of the Lost Ark’ in which actor Harrison Ford is forced to outrun a giant stone boulder that he inadvertently triggered by a booby trap switch,” FBI Special Agent Jeffrey Gray wrote in an affidavit.

After agents entered the home, a wheelchair near a door was moved, causing an explosion that set off another trap. The blast sent a shotgun shell into the agent’s leg. The agents and bomb technicians found other traps and improvised devices and weapons inside the home after the wounded agent was rushed to a hospital. Rodvelt, who was already facing charges in Arizona stemming from a 2017 standoff with police, was charged in Oregon federal court with assault on a federal officer, court records show. Rodvelt remains in custody in Maricopa County, Arizona, where he is awaiting sentencing in the 2017 case.

Here’s what you need to know about Gregory Rodvelt:

1. Rodvelt Warned Agents Not to ‘Race Right In’ to the Booby-Trapped Home Because There Could be More Devices, the FBI Says

FBI agent shot by booby-trapped wheelchair in Oregon homeAn Oregon man has been arrested after a FBI agent was shot entering a property that contained several booby-trapped devices. According to court documents, agents responding to a home in September discovered an empty wheelchair that exploded when it was moved, causing objects to shoot into an agent's leg. Anne-Marie Green has more.2018-10-02T21:02:28.000Z

Gregory Rodvelt was ordered on August 22, 2018, to turn over his property in Josephine County to attorney Joseph Charter, who was tasked by a judge with taking possession of the property, cleaning it up and ultimately selling the property, according to the criminal complaint. The house had been seized as part of an elder abuse case involving Rodvelt’s 93-year-old mother, according to court documents. When the attorney, Charter, went to the property on August 29, he saw a sign that warned the home was protected by “improvised devices,” according to the complaint. Charter then asked the Oregon State Police and the FBI to search the property and render any devices safe.

On September 7, the FBI and state police bomb technicians went to the home at 1000 Dreamhill Drive in Williams, Oregon. When they arrived they saw a mini-van parked in a manner that would prevent vehicles from driving past the front gate, FBI Agent Jeffrey Gray wrote in an affidavit in support of the criminal complaint. “The technicians discovered that the mini-van was rigged with two booby traps. The booby traps utilized steel traps with steel teeth commonly used to trap animals. No explosives were incorporated with the traps,” Gray wrote. The technicians rendered the traps safe and moved to the residence. It is then that they saw the hot tub trap.

Technicians also found a wood rat trap inside a garage next to the doors. “The trap was altered to accommodate a shotgun shell. The trap was not set, but it was situated in such a manner that had it been set when the garage door was lifted the trap would be tripped. The bar of the trap would fall on the shotshell primer with the apparent intended results being the discharge of the shotshell,” Gray wrote. He said the technicians found the windows of the home were barred from within and the rear door was secured by a heavy-duty security door that opened inward.

According to Gray, the agents and bomb technicians then used an explosive charge to breach the front door of the home. When they entered the home, a wheelchair was moved forward, causing an explosion, according to the complaint. A state police bomb technician described it as “very loud” and said it caused him to “become disoriented.” An FBI special agent then yelled, “I’m hit.” According to the complaint, a significant amount of blood was coming from his leg. He was rushed to a hospital and a shotgun shell was found in his leg below the knee. He was treated and released from the hospital.

When Rodvelt was later questioned by the FBI, he was asked if there were any other traps on the property and he warned them to “not race right in.” 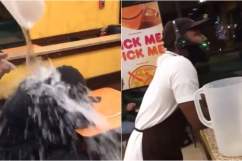 2. A Member of the ‘Sovereign Citizen Movement,’ Rodvelt Faces 5 to 15 Years in Prison in Arizona After Being Convicted in Connection to the 2017 Standoff

.@Surprise_PD says 65 year-old Gregory Rodvelt of Sun City West is the suspect from the earlier barricade situation in Wittmann pic.twitter.com/LpaeyXuX9m

Rodvelt, who also owns a home in Sun City, Arizona, was arrested in April 2017 after a standoff in Surprise, Arizona, according to the Arizona Republic. Police responded to a report of a man who had brandished a gun and pulled Rodvelt over. Rodvelt refused to cooperate or leave his vehicle. During a standoff, police shut down a major road. After several hours, he was taken into custody.

Rodvelt was charged with aggravated assault with a deadly weapon, resisting arrest, failure to comply with police and three counts of failure to mark explosives. Court records show that Rodvelt was found guilty on October 2 in that 2017 case after a two-day trial in Maricopa County and is scheduled to be sentenced October 31. A spokesperson for the Maricopa County Attorney’s office told Heavy that Rodvelt was convicted of aggravated assault, a class 3 dangerous felony; resisting arrest, a class 6 felony; three misdemeanor counts of misconduct involving explosives; and one misdemeanor count of interfering with the judicial process.

Rodvelt faces a mandatory prison sentence of between five to 15 years, with a presumptive sentence of 7.5 years, Maricopa County Attorney’s Office public information director Amanda Steele said. He remains in the custody of the Maricopa County Sheriff’s Office. It is not clear how much time in prison he is facing in that case. An attorney listed for him could not immediately be reached for comment by Heavy.

According to JJ MacNab, an anti-government extremism researcher, Rodvelt is part of the “sovereign citizen movement.” His 2017 arrest was listed in a report MacNab put together on anti-government extremist violence and plots. MacNab says a sovereign citizen is “someone who believes that he or she is above all laws.” She adds, “Sovereign citizens are true believers. They generally entered the movement by buying into a scam or conspiracy theory that not only promised them a quick fix to their problems, but wrapped such solutions in a heavy layer of revolutionary rhetoric. Once a sovereign feels the flush of excitement and self-importance that comes from acting as the David to the U.S. government’s Goliath, they know, with all of their hearts and souls, that their research is correct, that their cause is just, and that anyone who disagrees with them is a criminal who deserves to be punished.”

3. Rodvelt Went to Oregon to Prepare to Turn Over the Property After Losing a $2.1 Million Judgement in the Elder Abuse Case While Out on Bail in the Arizona Case

Rodvelt was released on $10,000 bond and was required to wear an ankle monitor after his 2017 arrest in Arizona. In August, he was allowed to travel to Oregon for two weeks for the civil matter involving his property there. Neighbors told the FBI that during those two weeks, Rodvelt was seen at the property in Josephine County. Investigators believe it was during that time that Rodvelt set the traps at his home.

At some point before the incident involving the FBI, Rodvelt returned to Arizona. On September 7, FBI agents approached Rodvelt at a store in Surprise, Arizona. “Rodvelt was told he was being interviewed regarding his property in Oregon. During the interview, Rodvelt stated that he set up fishing line and a tripwire across the property gate that went to a round hot tub that was on its side set to roll down the hill and hit whoever comes through the gate. Rodvelt described it by referencing the stone rolling down in the Indiana Jones Movie. Rodvelt also talked of other tripwires on the property and a spike strip made of nails and wood which was designed to flatten tires. Rodvelt did not provide additional specifics about the tripwires.”

On September 10, the federal charge was filed against Rodvelt. 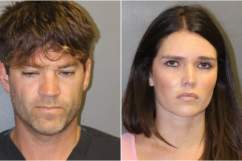 4. He & His Dog Were Shot by a Friend During an Argument While Drinking & Shooting Guns in 2016

Rodvelt was the victim of a shooting in 2016 in Port Ludlow, Washington, according to a report from the time in the Peninsula Daily News. Rodvelt and his dog were shot by his friend during an argument that broke out while they were drinking and shooting guns, according to the report. Rodvelt was shot in the shoulder. The dog also survived. His friend, Dean Carlson, of Port Ludlow, was charged with second-degree assault with a deadly weapon and first-degree animal cruelty, Jefferson County court records show.

Carlson told police he didn’t mean to shoot Rodvelt, a friend he hadn’t seen in about 20 years, but was just trying to scare him. Police said Rodvelt and Carlson went up to a wooded area to drink and do some shooting, when they began fighting. According to the Peninsular Daily News, “Rodvelt became angry that Carlson was driving too slowly and they began to argue. Rodvelt then punched Carlson’s right eye, according to the report. When they returned back to Carlson’s yurt, a tent-like structure, Carlson told Rodvelt to leave and he went to bed.”

Carlson told police that when he woke up, Rodvelt’s truck was still there and he again told him to leave. Carlson said he then grabbed a shotgun and when Rodvelt returned he fired it in the “general direction” of Rodvelt and his dog. Rodvelt ran for cover behind a fridge, but was shot before he could get there. Carlson then fired a second shot and Rodvelt fled with his dog to a neighbor’s house. Police said Carlson poured gin into a Gatorade bottle and st down to wait for police to arrive, the newspaper reports.

5. Rodvelt Has a Lengthy Criminal Record, Including Arrests for Having Illegal Weapons, Driving Without a License & Insurance & for Child Neglect

Rodvelt is divorced and has two estranged children. His estranged adult son wrote on Facebook, “I ran away from home at 15. My mom found the courage shortly after to follow with my sister. He went to jail for child neglect. Mom was acquitted. Later I helped his mother escape from him after elder abuse. For the past 19 years I’ve been waiting for the day that he would no longer be a threat to my family or society.”

READ NEXT: 4 Members of White Supremacist Group Accused of Rioting at Charlottesville ‘Unite the Right’ Rally