Whitey Bulger, the notorious former leader of the Winter Hill Gang in Boston, Massachusetts, was reportedly worth an estimated $25 million before his arrest in 2011. Investigators arrested Bulger in Santa Monica, California, after searching for him for 16 years.

The 89-year-old was convicted in 2013 on charges including multiple counts of murder, extortion and money laundering. He was sentenced to life in prison. But it was reported on October 30, 2018, that Bulger was killed in a West Virginia prison. You can read more about his death here.

During his life on the run, Bulger paid for everything in cash and lived modestly so as not to attract attention. Prosecutors analyzed statements from witnesses and Bulger’s former crime colleagues, and added up the cash they found to determine an estimation for how much money Bulger acquired over the years. That estimate came to $25,162,800, as reported by ABC News.

1. FBI Agents Discovered More Than $800,000 in Cash Hidden in the Walls of Bulger’s California Apartment When They Arrested Him in 2011

Department of Justice via CBS NewsEvidence collected against Whitey Bulger included more than $800,000 in cash.

Whitey Bulger and girlfriend Catherine Greig lived in an apartment in Santa Monica, California prior to his arrest. They paid for everything in cash. When FBI agents raided the home in 2011, they discovered that Bulger kept all of that money hidden inside the apartment.

Agents discovered stacks of cash placed behind the walls of the home. Most of the packages contained $100 bills. The money totaled $822,198.

The Los Angeles Times reported at the time that Bulger continued to stockpile cash while hiding out by gambling in Las Vegas. He told investigators during the plane ride back to Boston that he enjoyed playing the slots and that he had “won more than he lost” over the years. 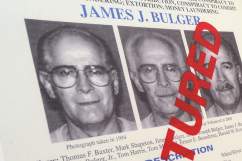 2. Whitey Bulger Reportedly Paid $1,145 Monthly Rent For the Santa Monica Apartment He Lived in For More Than a Decade

GettyView of the Princess Eugenia building in Santa Monica, California. Bulger and girlfriend Catherine Greig lived on the third floor for more than ten years under the names Charles and Carol Gasko.

Whitey Bulger and Catherine Greig’s home for more than a decade was a 28-unit apartment building built in the 1970s. The building, which was called Princess Eugenia, was three stories tall and Bulger lived on the top floor. It is located just a few blocks away from the beach.

According to the Associated Press, Bulger paid $1,145 per month, in cash, for the apartment. The unit was rent-controlled and Bulger reportedly paid half as much of some of his newer neighbors. Bulger and Greig used the names Charles and Carol Gasko to rent the apartment.

Before his arrest, Whitey Bulger was living with more than $800,000 in cash inside his home. But investigators said he had taken steps to hide other assets in various places around the world.

By the time Bulger was convicted in 2013, investigators had discovered four safety deposit boxes. They were in London, England; Dublin, Ireland; Montreal, Canada; and Clearwater, Florida. They reportedly contained cash, credit cards, and passports.

The London safety deposit was found and opened in 2003. According to the New York Times, the box contained $50,000. A former girlfriend of Bulger’s, Teresa Stanley, told investigators that he had rented the box in 1994. His brother, William Bulger, was listed as the contact person with the account.

The London box also contained a key to another account in Dublin. Agents were then able to find that safety-deposit box, which contained $10,000.

4. The Federal Government Auctioned Many of Bulger’s Personal Belongings & Divided the Proceeds to Families of Bulger’s Victims

U.S. Marshals auctions Whitey Bulger’s belongings after his conviction, including these two rings.

Whitey Bulger did not own a car or show off expensive items during life on the run. But FBI agents did confiscate some valuable jewelry at the Santa Monica apartment.

Federal officials auctioned off many of the items found in Bulger’s apartment. The profits of the auction, as well as the $822,000 in cash found hidden in the walls, were divided among families of Bulger’s victims.

The auction included two rings. As reported by Bloomberg, one was a 14-karat gold diamond ring called the Claddagh ring, which Bulger may have stolen from a member of a rival gang. It sold for $14,500.

The second was a sterling silver nicknamed the Psycho Killer Skull. It was sold for $5,200. Bulger also owned a replica of a Stanley Cup championship ring from 1986, that included 23 round diamonds. It went for $9,500.

Officials also auctioned electronics, furniture, clothing, books and picturs. The catalogue of the items can be found here.

5. Prosecutors Attempted to Discover How Much Money Whitey Bulger Had Extorted From Victims Over Many Years

Prosecutors had a challenging task in trying to estimate the total of Whitey Bulger’s wealth. They interviewed multiple witnessed who said the former gang leader had stolen massive amounts of money from them through extortion.

As CNN reported in 2013, one of those witnesses was David William Lindholm, who was identified as a “marijuana smuggler.” He testified that Bulger had instructed another gang member to hold a gun to Lindholm’s head, and demanded $250,000.

Another witness who took the stand during the trial was Michael Solimando, whom CNN described as a business entrepreneur. He said Bugler forced him to pay $400,000 in order to prevent Bulger from killing his family.

READ NEXT: Can Congress Overturn an Executive Order by the President?

Read More
5 Fast Facts, Breaking News, Crime
Prosecutors estimated Whitey Bulger's net worth to be $25 million prior to his arrest.