Getty Jennifer Lawrence denied being romantically involved with Harvey Weinstein after the disgraced movie mogul bragged that he had sex with her, according to a lawsuit.

Jennifer Lawrence denied being romantically involved with Harvey Weinstein after the disgraced movie mogul bragged that he had sex with the Oscar-winning actress, according to a lawsuit filed against Weinstein by an unnamed actress in Los Angeles.

The lawsuit states that, as Weinstein was forcibly performing oral sex on the victim, she was sobbing and telling him “no.” Weinstein is then alleged to have asked, “Do you even want to be an actress?”, adding: “I slept with Jennifer Lawrence and look where she is; she has just won an Oscar.”

Lawrence responded to Weinstein’s claim, calling it “another example of the predatory tactics and lies that he engaged in to lure countless women.”

Weinstein Doe by on Scribd

The woman, identified only as Jane Doe in the lawsuit, says she first met Weinstein at the Sundance Film festival in 2013. She says they had a business meeting at the Waldorf Astoria in Park City, and she got up to go to the restroom. In court documents, she says Weinstein walked in while she was sitting on the toilet.

The lawsuit states that Doe initially thought he might have walked in by accident, but she quickly became terrified and uncomfortable when he dropped his pants, pulled out his penis and said “my d–k is nice and hard for you, do you like my d–k?”

2. Weinstein Also Forcibly Performed Oral Sex on Jane Doe Sometime Later, According to the Lawsuit, Which is When He Claimed to Have Had Intercourse With Lawrence

Later that year, Jane Doe claims they met in New York City to discuss the film “Vampire Academy.” The lawsuit states that the two had a dinner meeting and afterward they went to his office.

The lawsuit states that Weinstein said he was trying to help her and that he was the “gateway to her dreams,” according to the suit, adding, “I slept with Jennifer Lawrence and look where she is; she has just won an Oscar.”

3. Lawrence Issued a Statement Denying Ever Being Involved With Weinstein & a Spokesperson for Weinstein Calls the Claims a “Malicious” Attempt to Embarrass Him 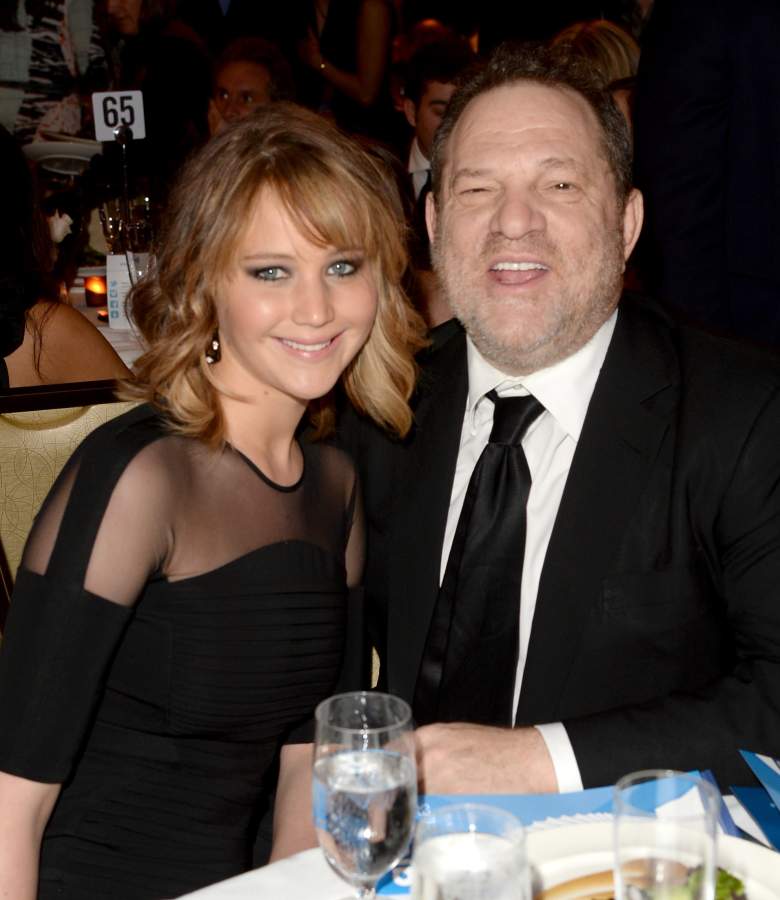 Lawrence issued a statement on Friday denying she had had a sexual relationship with Weinstein. “My heart breaks for all the women who were victimized by Harvey Weinstein. I have never had anything but a professional relationship with him. This is yet another example of the predatory tactics and lies that he engaged in to lure countless women.”

A spokesperson for Weinstein told TMZ, “This lawsuit was filed and updated strategically with no notice given or any attempt to reach out to Mr. Weinstein’s attorneys for one reason; It was meant to embarrass Mr. Weinstein and garner unchecked media attention. There is absolutely no truth to the malicious claims made in this lawsuit, and we are reviewing our options with an eye on filing for an immediate dismissal.”

The statement continues, “Mr. Weinstein is embarrased for Ms. Lawrence with whom he has only had a professional and respectful relationship, who has sadly been dragged into this ugly attempt at defamation. This filing further proves that anyone can say whatever they want in a lawsuit for maximum shock value, to defame and debase, without having to offer any facts or reality.”

4. Weinstein Has Been Accused of Sexual Assault & Rape By Dozens of Women, Most of Who Were Aspiring Actresses

Getty/TwitterAs Harvey Weinstein’s arrest looms closer, here’s a look at a just a few of the dozens of accusations against Weinstein.

Weinstein has been accused of sexual assault, sexual harassment and rape by more than 50 women including A-list actresses such as Gwyneth Paltrow, Ashley Judd and Angelina Jolie, is being formally charged for a case involving a woman named Lucia Evans. Evans, a former college student and aspiring actress, says she was forced to perform oral sex on Weinstein in 2004 despite repeatedly telling him “no,” according to the New Yorker.

The accusations, which many in the entertainment industry say have been common knowledge for several decades, were uncovered by by Megan Twohey and Jodi Kantor at the Times and Ronan Farrow at The New Yorker.

According to a statement sent to the Times, Weinstein issued an apology acknowledging that his actions have “caused a lot of pain” to women over the last 30 years, but unequivocally disputes the allegations that he harassed any female employees during his time as a film producer and executive.

Due to the allegations against Weinstein, he has been fired from his company, kicked out of the Academy of Motion Picture Arts and Sciences, and pushed out of the Directors Guild of America.

5. Weinstein Turned Himself Into Police Earlier This Year But Continues to Deny Any Allegations of Non-Consensual Sexual Misconduct

Millions of people watched as the former American film producer walked to the doors of the NYPD to turn himself in to police in May. Weinstein is being charged with a plethora of charges involving rape, sexual misconduct, sexual abuse and criminal sex act.

The charges filed stem from incidents with two separate women in 2013 (Jane Doe) and 2004 (Lucia Evans), the Manhattan district attorney said in a statement, and were the result of a joint investigation between police and the Manhattan DA’s office.

However, Weinstein and his legal team continue to deny any wrongdoing, stating: “Mr. Weinstein has always maintained that he has never engaged in non-consensual sexual behavior with anyone. He has entered a plea of not guilty and fully expects to be exonerated,” attorney Benjamin Brafman said in a statement after Weinstein turned himself in.

Read More
#MeToo, Celebrities, Crime, Harvey Weinstein
wpDiscuz
0
0
Would love your thoughts, please comment.x
()
x
| Reply
Jennifer Lawrence denied being romantically involved with Harvey Weinstein after the disgraced movie mogul bragged that he had sex with her, according to a lawsuit.