A 54-year-old Tennessee woman was arrested on February 25 in the hit-and-run death of rookie Chattanooga Police Officer Nicholas Galinger, who was struck and killed by an SUV while checking a manhole cover during a rain storm on February 23, authorities say. Janet Elaine Kirk Hinds is facing multiple charges, including vehicular homicide, the Tennessee Bureau of Investigation says.

Kirk, who is the postmaster in Soddy Daisy, Tennessee, and a longtime resident of Hixson, in Hamilton County, is accused of fleeing the scene of the crash after hitting and killing the 38-year-old Galinger. The officer just graduated from the police academy in January and was out with his training officer when he was killed, according to police.

VIDEO: Janet Hinds being read her rights and handcuffed inside Chattanooga Police Department. She is accused of hitting a @ChattanoogaPD Officer with her car and fleeing the scene. @wdefnews12 #OnlyOn12 pic.twitter.com/dd1sum9uea

Kirk’s Honda CRV was found February 24, hours after the incident, at her home with heavy front-end damage, the TBI said, but she was not at the house. Kirk turned herself in after charges were filed against her. She made her first court appearance on February 25 and her bail was set at $300,000.

.@ChattanoogaPD Officer Nicholas Galinger wasn’t just a police officer. He was “a son, a father, a friend and a protector." — @ChiefDavidRoddy.
Photo provided by Galinger family. pic.twitter.com/zbHG6RD0Mf

Chattanooga Police Chief David Roddy said about Galinger at an emotional press conference prior to Kirk’s arrest, “This community lost not just an officer, but a son, a father, a friend, and a protector.” Galinger, a Cincinnati native, graduated from the police academy on January 24, 2019.

“Being a police officer was a life-long dream, and that dream has been cut short,” Eric Mace, Galinger’s uncle, told WCPO-TV. “He lived for his kids and he lived to be a police officer.”

Here’s what you need to know about Janet Kirk Hinds:

1. Hinds Was Driving at a ‘Very High’ Rate of Speed in Bad Conditions When She Struck a Sign & Then Hit Officer Galinger as He Checked an Overflowing Manhole Cover, Police Say

Police say Janet Elaine Hinds was driving her Honda CRV at a “very high” rate of speed in poor weather conditions about 11 p.m. on February 23 when she struck and killed Chattanooga Police Officer Nicholas Galinger, The Chattanoogan reports. Hinds also crossed a double yellow line and struck a road work warning sign before hitting Galinger, investigators said. The rookie officer was checking an overflowing manhole cover during heavy rain on Hamill Road at the time of the incident, police said.

According to investigators, Hinds missed signs set up by the Chattanooga public works department warning about the exposed manhole cover.

Photographer @eosmit8 and I just left the scene of the incident. This is likely the manhole cover that Officer Galinger was inspecting at the time he was hit. It’s the only one bubbling in the 2900 block of Hamil Rd. We saw several cars drive through without slowing down. pic.twitter.com/gomeAZe0oX

After hitting Galinger, Hinds drove away from the scene, again at a high rate of speed, police said. She did not stop to render aid and failed to report the crash, according to police. Galinger was rushed to a local hospital, where he later died.

According to police, Hinds’ SUV was found on February 24 at her home on Port Drive in the Port Serena subdivision at Dallas Bay in Hixson, The Chattanoogan reports. Officers checked to see if she was home, but she was not there.

This is a view of her with her attorney before Judge Sell. pic.twitter.com/nZKiOlRyBP

Police are seeking information from the public as to where Janet Hinds was and what her behavior was like before 11:04 p.m. on February 23, 2019.

MORE: @ChattanoogaPD is asking for the community's help in finding out where Janet Hinds was before the deadly incident which claimed the life of CPD Officer Nicholas Galinger Saturday night. STORY: https://t.co/aTukvp7A0G pic.twitter.com/QT73pqyGiu

Hinds is not charged with driving while impaired. Her defense attorney said during her first court appearance that “weather was a significant factor.” But the judge said she doesn’t understand, “how the hitting of a person could not be known.” 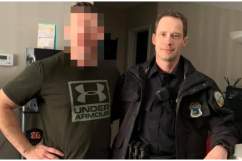 2. She Is a Tennessee Native Who Has Worked for the U.S. Post Office for 33 Years & Has No Previous Criminal Record, but Has Been Cited for Speeding

Hinds has worked for the U.S. Postal Service for 33 years and she has no prior criminal record, according to statements made Monday in court. According to prosecutors, she was previously cited for speeding.

Hinds is a Tennessee native and attended Hixson High School, according to her Facebook profile. She has hired two local attorneys to represent her. She and her family could not be reached for comment by Heavy.

However, her attorney later released a statement, calling what happened an “unavoidable accident.”

NEW: Janet Hinds attorney shared this statement with me. He calls the crash an unavoidable accident and send condolences to Officer Galinger’s family and CPD. @WRCB pic.twitter.com/huVVZkc36D

“Officer Galinger’s tragic death is a terrible loss which has brought great sadness to all involved. As the case progresses, we believe it will be understood to have been an unavoidable accident. However, during this time our deepest condolences go out to this honorable officer’s family, loved ones, and fellow officers,” the statement read.

On Facebook, Hines mostly shared pictures of family members, flowers, and puppies. “Bless his heart. He is starving for attention. No has such a cute face. Love my 3 babies!” she wrote with one photo of a small dog.

3. Hinds Turned Herself in Monday Morning to Face 10 Charges After She Was Named to the Tennessee Bureau of Investigation’s Top 10 Most Wanted List the Night Before

Suspect in deadly hit and run, where Chattanooga Police Officer was killed, turned herself in. Janet Hinds is in custody. pic.twitter.com/vw8rAlQdR8

The most serious charge, vehicular homicide, is a class B felony and carries a potential prison sentence of between 8 to 30 years.

A spokesperson for the CPD confirms this is in fact the vehicle they are investigating in connection to the officer involved hit and run. The spokesperson says officers knocked on the door of the home and nobody answered. They are still looking for the owner of this car. pic.twitter.com/KqUe6qf2sG

Shots of Janet Hinds along with her attorney Ben McGowan as Hinds turned herself in shortly before 9:30 a.m. @BlevinsSam pic.twitter.com/8dUae4VQOm

4. She Has Been Married Since 1991, Has 2 Sons & Is the Daughter of a Legendary Local High School Softball Coach

Janet Kirk Hinds is the daughter of Clifford Kirk, a legendary high school softball coach at Soddy Daisy and Sale Creek high schools, according to The Chattanoogan.

Hinds has been married to John Hinds since 1991, according to local public records. She is the mother of two sons, one from her marriage to Hinds and the other from a previous relationship. She was born and raised in Hixon.

BREAKING: Janet Hinds stands in handcuffs next to her attorney. @WRCB pic.twitter.com/mlsLa3sRay

Rhonda Thurman, a school board member in Soddy Daisy who has known Hinds since high school, told The Chattanoogan, “She is the sweetest thing. I am shocked and just heart-broken over this. She must have just completely panicked.”

5. If She Posts the $300,000 Bail, Hinds Will Remain on House Arrest Until Her Trial & Is Barred From Driving, a Judge Ordered During Her First Court Appearance

Janet Hinds was issued $300,000 bail during her first court appearance on February 25. The judge ordered that she been on house arrest until trial and barred her from driving. She is scheduled to return to court on March 5. It was not immediately clear if she was going to be able to post bond.

Janet Hinds looks back at the cameras in the courtroom after her bond is set at $300,000 in the fatal hit and run of a Chattanooga police officer pic.twitter.com/5O2TwUTCdB

Hammond added, “Law enforcement is a dangerous career and those who heed the call to serve do so willingly and selflessly. Despite the dangers of the profession, each day men and women across our Nation choose to don the uniform of their local law enforcement agencies to serve and protect. They leave their homes not knowing if they will return. Unfortunately, due to the times we live in, more and more of our dedicated public servants in law enforcement are not returning home.

In the case of last night’s tragic incident, our community, our Nation, lost another brave public servant.On behalf of the Hamilton County Sheriff’s Office, I would like to ask our Heavenly Father to bless the officers of the Chattanooga Police Department as they mourn the loss of Officer Galinger. I also wish to offer our prayers and support to Officer Galinger’s family. The Hamilton County Sheriff’s Office is here to help in any way necessary,” Hammond said.

This is Officer Galinger. It’s the only photo @ChattanoogaPD had of him since he was such a new officer. He graduated just last month… pic.twitter.com/P8D8ZaRwbG

Hamilton County Mayor Jim Coppinger added in a statement, “We want to take a moment this afternoon to extend our deepest sympathy to the family of Officer Nicholas Galinger who has died in the line of duty. Officer Galinger died while serving and protecting the public. We join the Chattanooga Police Department as they mourn this loss and join his fellow officers in their prayers and thoughts for Officer Galinger’s family during this terrible, tragic time.”

Funeral arrangements for Officer Nicholas Galinger are being finalized.

READ NEXT: Woman Mauled to Death by Her Own Dogs