Corinne Terrone, a now-former Hamden, Connecticut, public schools employee, has been identified as the woman caught going on a racist rant in a viral video.

Terrone resigned after she was caught on video repeatedly cursing and screaming ni**ers at two African-Americans while shopping in an East Haven Shoprite. And she spits at the couple multiple times.

The video was shared on Facebook by Tatiana Winn but has since been set to private.

Terrone, 40, whose maiden name is Magoveny, had her two young children with her when she screamed curses, racial slurs, and spat. She’s been reported to the Connecticut Department of Children & Families by the school district. 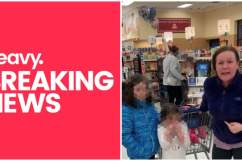 In the video, which begins with Terrone screaming, “…I will. Don’t you dare talk to me like that in front of my children motherfuc*er.” A few words are inaudible until she’s heard saying “they’re fuc*ing ni**ers in East Haven, that’s why.”

The man to whom she was directing her rage can be seen heading toward Terrone as people he’s with hope to calm him down, saying, “Don’t do it.” But Terrone yells, “put your hands on me. Come on. Come on,” and then points her phone close to his face as if to record. Another man attempts to get between them when the first man pushed the phone out of her hand and walks away but Terrone hurries after him shouting, “Oh you motherfuc*er, you motherfuc*er. That’s why there’s ni**ers in East Haven. And when a person who appears to be a store employee comes toward her Terrone yells: “Fuck you. ni**er.”

Terrone comes at the couple and spits at them. Twice.

The audio content below is explicit and unedited and contains numerous racist epithets and foul language.

The East Haven Police Department released the unedited version of her 911 calls to Heavy following a Freedom of Information request.

According to Lt. Joseph Murgo, she made a number of calls.

“The first call placed was made in error to the Easton, CT police department. On the recordings, she continues her hate-filled speech to a police dispatcher who finally advises her that she has called the wrong police department.”

In this brief call, she begins to tell the dispatcher what occurred and when she was told she needed to hold on, she shouted: “Don’t you dare put me on hold. Oh, Jesus Christ.”

She was told she had called the wrong police department and she hung up.

Subsequent recordings are of calls placed to the East Haven Police Department.

Terrone, who refers to herself by her maiden name Magoveny, delivers an expletive and racial epithet-laden description of what she said occurred. She claims she was walking in the grocery store near the check-out and turned to her young daughters and said: “Jesus Christ.” She does not provide context for what she was describing. She says a black man in a “scooter” asked if she was talking to him and called her a bitch.

“He called me a bitch so I called him a ni**er.” She said the man got up and “threatened me” and that there was “spitting going back and forth.”

She repeated that she called the man a “ni**er because he called me a bitch.”

She then proceeded to tell the 911 dispatcher to get an East Haven police officer to her house so she could press charges.

“That place is full of cockroaches and now I have to deal with being called a bitch by a ni**er in front of my kids? I don’t think so.”

Terrone then demands a police officer be sent to her house and when she gives her address, the dispatcher says he can’t send a cop because she does not live in the police department’s jurisdiction. “Of course, you can’t,” she mocks. “Then tell me what’s going to be done to arrest the ni**er who assaulted me verbally?”

“I want a fucking cop doing something now. I don’t want any excuses,” she shouts at the dispatcher.

As Terrone mocks, insults and demeans the dispatcher, she agrees to meet an East Haven police officer in the Shoprite parking lot but demands that the officer be white.

The dispatcher asks what kind of car she drives and she says it’s none of his business. He says the officer will need to be able to locate her. She says she’s going into Shoprite. He says not to do that. “Oh, but I am.” He replies: “Oh, but you’re not.”

She said she was told by her uncle this “wasn’t going how this was supposed to happen.” She tells the dispatcher her uncle is a New Haven Police Department detective.

The dispatcher says her uncle was wrong.

A Sgt. John Magoveny retired from the New Haven Police Department in 2011. In 2004, the New Haven Register reported that Magoveny “pleaded no contest to a charge of making a false statement” in relation to an incident involving his ex-wife and “avoided prison time during his recent sentencing.”

The call lasted nearly six minutes before she hung up.

It was reported Monday night that Terrone “was taken by New Haven police for an involuntary mental evaluation.”

Hamden Schools Superintendent Jody Goeler identified Terrone. A statement from the school district said Terrone “has resigned from her position.” She was a Hamden Public Schools central office administrative clerk.

Terrone had two young children with her at the store who can be seen in the video taken in the supermarket.

The incident occurred Friday, March 15 in the evening. By late Saturday morning, the school district responded and said that since “the employee’s children witnessed her conduct …(b)ecause her children were present, school administrators filed a DCF report,” meaning the Connecticut Department of Children and Families. “We hope that her children receive the support they need after witnessing such a traumatic event.”

A message was sent to Hamden schools families that said in part, that Terrone was identified, and contacted to come in for an “investigatory” meeting. But “shortly after final arrangements were made today for the investigatory meeting the employee tendered her resignation effective immediately.”

The district says the “language (Terrone) used in the video is in conflict with the values” of the school district and “someone who will use that sort of language in any setting whether public or private is not someone we want anywhere near our children.”

Loading more stories
wpDiscuz
0
0
Would love your thoughts, please comment.x
()
x
| Reply
Corinne Terrone screamed racist epithets, cursed and spat at a black couple in a grocery store with her young kids in tow. She lost her job and was reported to state authorities.