On Wednesday, officials investigating the illegal selling and manufacturing of weapons reported over 1,000 guns and firearms were recovered from Cynthia Beck’s home in Bel-Air, California. Members of the Los Angeles Police Department and the Bureau of Alcohol, Tobacco, Firearms and Explosives (ATF) were working together after obtaining a search warrant for the $7 million home in one of the most affluent neighborhoods in LA.

Beck, former mistress of billionaire Gordon Getty, with whom she shares three children, was not at the property when the official search and seizure took place, and if she has any involvement in any either the weapons or the search warrant, it is unknown. Her home is located up the street from the Playboy Mansion, west of the home where Michael Jackson died, and east of Beyoncé and Jay Z‘s $88 million mansion. From this 8,200-square-foot, five-bedroom manse sitting in one of the most expensive neighborhoods in Southern California, LAPD Lieutenant Chris Ramirez said they recovered gun of all makes, calibers and models, along with more than 1,000 rounds of live ammunition.

Ramirez added that the weapons will be itemized and booked into evidence. One man was arrested inside the house for the crime of selling, possessing or transporting illegal assault weapons. The suspect in custody was identified by the police as Girard Damien Saenz, 57, owns a few properties with Beck, who somehow remains a fiercely private woman.

Here’s what you need to know about Cynthia Beck:

1. Beck’s Affair With Gordon Getty was An ‘Open Secret’

#HolmbyHills Gordon Getty (right) purchased the mansion for his mistress Cynthia Beck. Getty is a big Democratic donor…donating to the campaigns of Nancy Pelosi, John Kerry and Gavin Newsom. pic.twitter.com/vNJp2SmLfG

The son of billionaire J. Paul Getty, Gordon Getty sold Getty Oil to Texaco for $10 billion in the mid-eighties, and settled down in San Fransisco, California, after marrying wife Anne. Together they had four sons, including Andrew, who tragically died of an overdose in Getty’s Hollywood Hills mansion.

While many people in their inner circle knew about Getty’s secret life with his mistress Cynthia Beck, including his wife Ann, the affair became public knowledge in 1999. Living in Los Angeles, Beck and Getty had three children together, and when the kids went to court to claim their birthright, and legally change their last name to be that of their father, their affair was prime for tabloid fodder. Getty put out an official statement following the news scandal, “Nicolette, Kendalle and Alexandra are my children. Their mother is Cynthia Beck, and I love them very much.”

Today, Getty, 85, remains married to Ann. At the time of the scandal, Anne’s lawyer William Coblent said, “Nothing is secret in this world, and sooner or later we knew something was going to come out. You face the facts. That’s it. I’ve learned long ago that you tell the truth on these things.” 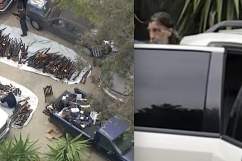 In the midst of a beachside strip of homes in Malibu known as Paradise Cove, homes run anywhere from $40 to $60 million, and are owned by some the world’s wealthiest people, Steve Job’s widow Laurene Powell, LA Rams owner Stan Kroenke, who lives with wife, Walmart heiress heiress Ann Walton, and where Leonardo DiCaprio’s empty lot was worth $20 million in 2016. Right smack in the middle of these gorgeous homes sits Cynthia Beck’s run down, dark beach mansion, documented by Yes Theory.

Located in a gated property, the .54 acre property is only accessible through a private road shared with Beck’s neighbor, tennis star John McEnroe and his wife Patty Smythe, whose home is worth a cool $21 million. According to Yolanda’s Little Black Book, Beck continues to pay up to $14,000 a year in property taxes on the house, it remains totally abandoned.

3. Beck & Saenz Own A Few Properties Together

Public records show that the Bel-Air home, located at 111 N Beverly Glen Boulevard, isn’t the only property Beck shares with Girard Damien Saenz. They are also co-owners of a 4 bedroom home at 1190 West Sunset Boulevard, which the bought for $405,000 in 2007, along with two of Beck’s daughters, Kendalle and Nicolette.

For someone involved in one of the biggest marriage scandals of the 90s, there are no pictures or much information on Cynthia Beck. Other than the fact the she owns about twenty properties in Los Angeles, which she “bought” during her relationship with Getty. Her most expensive home is a 3-acre estate in Beverly Hills, which like her Malibu home, has been left in deterioration and is now surrounded by a barbed wire fence. It’s unknown why Beck hasn’t sold off any of the neglected properties, which even in their despair shape, have a total value of nearly $60 million.

Beck is believed to be in her 60s and living somewhere in Europe. In 1999, she was described to SF Gate as a “lovely woman” by friends of the Getty Family, and her daughters’ attorney Stephen Burgin said, “She is a nice lady and lives in the L.A. area. [The girls, who were 8, 10 and 14 at the time] they know and love their dad… and that their desire to carry Getty’s name outweighed the risk of exposure. “The mother is certainly aware of it. But this is not her issue, it’s their issue.”

5. Cynthia is So Private, No One Knows Where She Is

While Beck was not at the Bel-Air house during the investigation of her home which produced a shocking amount of weaponry and fire-arms, the most information known of her whereabouts is that she’s somewhere in Europe. She and Getty kept were able to keep their secret family under the radar for 14 years, so if anyone knows how to evade the public spotlight, it’s Beck.

READ NEXT: Anna Wintour’s Net Worth: 5 Fast Facts You Need to Know

Loading more stories
wpDiscuz
0
0
Would love your thoughts, please comment.x
()
x
| Reply
What you need to know about Cynthia Beck, former mistress of billionaire Gordon Getty, and owner of the Bel-Air home where LAPD seized over 1,000 guns.