Eric Jack Logan, a father and resident of South Bend, Indiana, was shot and killed by a police officer on June 16, 2019. He was 54.

Police Sgt. Ryan O’Neill was wearing a body camera, but it was turned off at the time of the shooting. O’Neill says he was investigating possible car break-ins in the middle of the night and that he encountered Logan holding a knife. He says Logan refused to drop it and that O’Neill feared for his own safety.

But Logan’s family disagrees with O’Neill’s testament. They say Logan would never have threatened a police officer and that he does not have a violent criminal history. A special prosecutor is being brought in to oversee an independent investigation.

The case has highlighted racial tensions in South Bend and prompted criticism of Mayor Pete Buttigieg. He faced angry constituents during a town hall event a few days after the shooting.

1. Eric Jack Logan Was a Father & Grandfather, According to His Obituary

Eric Jack Logan was a South Bend native. According to his obituary, he was a graduate of LaSalle High School, which closed its doors in the early 2000s. Logan worked at the Elkhart Plastic & CTDI company in Elkhart, which is about 15 miles east of South Bend.

Logan was a father and grandfather, according to his obituary, and prioritized family time above all things. The article does not mention a wife. But Shafonia Warfield Logan has been identified by local media outlets as Logan’s spouse and she refers to him as her husband on her Facebook page. The South Bend Tribune reported that Logan lived with his mother in an apartment near the downtown area.

2. Sgt. Ryan O’Neill Says Eric Logan Was Holding a Knife & Refused to Drop It, But There is No Video to Corroborate O’Neill’s Account Because His Body Camera Was Turned Off

Shouting, pleading and frustration filled 90 minutes of a town hall meeting in South Bend as concerned citizens faced the mayor and police chief in the aftermath of the officer involved killing of Eric Logan. https://t.co/ECpWOw36wo

South Bend Sergeant Ryan O’Neill responded to the Central High School Apartments parking lot around 3:30 a.m. on Sunday, June 16. He was investigating a tip that someone with a flashlight was breaking into parked vehicles. O’Neill was alone when he pulled into the parking lot. Investigators later confirmed that six vehicles had been broken into and had items stolen.

O’Neill said that he saw Eric Logan with his legs sticking out of a vehicle. He claims that Logan stepped out of the car holding a knife and refused to drop it when O’Neill repeatedly demanded him to, as reported by the Indy Star. He claimed Logan lunged at him with the knife; O’Neill fired two shots, striking Logan in the abdomen. O’Neill said he fired because he feared his life was in danger.

O’Neill told the dispatcher over the radio after the shooting that the “guy threw a knife at me.” But it’s unclear if Logan threw the knife or did in fact just drop it. You can hear the scanner traffic here courtesy of the South Bend Tribune.

O’Neill was wearing a body camera but it was not turned on. The South Bend police department allows its officers to turn their cameras on and off, as opposed to just setting them to record at all times. There was reportedly no other working surveillance cameras in the area.

Logan’s family says O’Neill’s version of events does not match up with Logan’s personality and that he does not have a violent criminal history. The Tribune reported that Logan previously served time in prison for drug distribution and had a prior conviction for carrying a handgun without a license.

3. O’Neill Requested an Ambulance But Logan Was Ultimately Taken to the Hospital in a Squad Car

Ken Cotter said he asked for an outside prosecutor to “avoid any appearance of impropriety, conflict of interest or influence upon the ultimate prosecutorial decision to be made.”https://t.co/xOnQNv2zCB

Sgt. O’Neill asked the dispatcher to send an ambulance to the Central High School Apartments after shooting Eric Logan. You can hear him call in the request in the scanner traffic referenced above. Several other officers also responded to the scene following the shooting.

But Logan was taken to Memorial Hospital in the back of a squad car instead, as you can hear from the radio scanner. The hospital is located less than a mile from the scene of the shooting.

You can hear an officer radio in that he was bringing “the suspect” to the hospital and asked other cruisers to open up intersections for him along the route. Logan was pronounced dead at the hospital.

4. A Special Prosecutor Will Determine if Criminal Charges Will be Filed

The St. Joseph County, Indiana prosecutor, Kenneth Cotter, explained in a press release on June 24 that he was requesting that a special prosecutor be appointed to investigate the fatal shooting of Eric Logan. He shared that he made the decision “to avoid any appearance of impropriety, conflict of interest or influence upon the ultimate prosecutorial decision to be made.”

The independent prosecutor will decide whether Sgt. O’Neill should face criminal charges. You can read the full release here.

Mayor Pete Buttigieg issued a statement that he supported the choice to bring in an independent investigator. It said in part, “Our community is in anguish, and for all of us to come to terms with what happened, it is vital that the investigation be fair, thorough, and impartial.”

5. Mayor Pete Buttigieg Addressed Angry Crowds in South Bend After the Shooting as Residents Called On Him to Do More

One reason the case has attracted so much attention is that South Bend Mayor Pete Buttigieg is running for president and has been gaining nationwide recognition. He canceled campaign events in order to return to South Bend following the shooting. On June 21, he joined protesters during a rally outside the police department. Some residents accused him of using the event as a political strategy to try to appeal to African-American voters, according to the Washington Post. Protesters argued that there was no reason for the officer’s body camera to have been turned off during the confrontation with Eric Logan.

Two days later, Buttigieg held a town hall event alongside the police chief. He struggled to be heard as people in the crowd yelled out, calling Buttigieg a “liar” and that they didn’t trust him. African-American residents called on Buttigieg to do more to eradicate racism within the police department; one woman said that her young son was afraid of police officers.

Things are still tense at this South Bend town hall with Mayor Buttigieg.

Moderator asks audience shouting questions to be respectful of the mayor’s schedule.

One man yells back:

“You gotta get back to South Carolina like you was yesterday?” pic.twitter.com/xzGq6i0iRx

Buttigieg addressed the issue again in a campaign email sent out the next morning. He wrote in part, “Our American values are at stake in the need for us to address the deep mistrust of police and governments among communities of color, which flows directly from the consequences of systemic racism. The many well-intentioned steps we have taken, locally and across the country, have not succeeded. We have not done enough. I will be working with my team and community to build on what we have done together over the past few years. It is clear we need to implement bolder and more aggressive actions moving forward.”

Buttigieg has faced criticism for the lack of diversity on South Bend’s police force. According to the South Bend Tribune, about a quarter of the city’s residents are African-American, but only 5 percent of officers are black.

The Eric Logan case has also brought up memories of Buttigieg’s first major controversy after becoming mayor. He demoted the city’s first black police chief, Darryl Boykins, in 2012 after Boykins was accused of conducting illegal wiretaps on other officers. After an investigation, Boykins was not charged and has since retired from the force. You can read more about that case and see court documents by clicking on the link below. 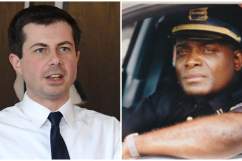