Darryl Varnum is an anti-vaxxer and cybersecurity engineer for a Pentagon contractor who was arrested on federal charges after investigators say he threatened to kill Florida Democratic Congresswoman Frederica Wilson because she supported a vaccine bill.

The 42-year-old from Westminster, Maryland, was indicted on a charge of threatening a federal official, the U.S. Attorney’s Office for the District of Maryland announced in a July 18 news release.

The Daily Beast was the first to report that the target of Varnum’s threat was Rep. Wilson. The Florida congresswoman has been the target of threats in the past after a public feud with President Donald Trump.

The alleged threat by Varnum came after Wilson introduced The Vaccinate All Children Act, which would require all public schools to ensure all their students were vaccinated before they receive any federal funding. The bill does allow for exemptions based on a doctor’s certification that vaccination would endanger a student’s health.

The U.S. Attorney’s Office said in the news release, “According to the one-count indictment, on June 26, 2019, Varnum allegedly threatened to murder a member of the U.S. House of Representatives, with intent to impede, intimidate, and retaliate against that person on account of the performance of that person’s duties as a member of U.S. House of Representatives. United States Attorney Robert K. Hur commended the U.S. Capitol Police for its work in the investigation. Mr. Hur thanked Assistant U.S. Attorney Kathleen O. Gavin, who is prosecuting the case.”

Wilson and her office have not commented about the threat. Varnum could also not be reached for comment. His attorney, a federal public defender, did not immediately respond to a request for comment from Heavy.

Here’s what you need to know about Darryl Varnum:

Darryl Varnum’s threat, according to feds.

I’m gonna kill your a** if you do that bill. I swear. I will f*cking come down and kill your f*cking ass. And you’re a Congressperson, that is fine. I hope the f*cking FBI, CIA, and everybody else hears this sh*t. If you’re taking away my rights. This is the United States of America, b*tch. Get the f*ck out. I will come down there and personally f*cking kill you. I am dead f*cking serious. I wanna see you motherf*ckers at m,y door, if you’re legit. That HR bill you just pushed through, a f*ck you. I’ll tell you what I’ll come down to Miami b*tch. I’ll f*ck you up. Like Cubans don’t even know.

“We take these types of violent threats extremely seriously,” U.S. Attorney Robert Hur said in a statement. “The investigation began immediately upon learning of the threats. Mr. Varnum was charged federally by criminal complaint and arrested on July 8th.”

Investigators were able to track the phone to Varnum and his home in Maryland, according to court documents.

You can read the full affidavit here. 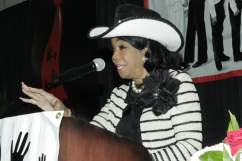 2. He Posted on Facebook About the Vaccination Bill, Writing ‘Holocost [sic] Has Begun! I’m Done With This Bullsh*t. Time to Step Up or Ship Out!’

Just minutes after federal authorities say Darryl Varnum made the threatening call to Rep. Wilson, he took to Facebook to also voice his displeasure over her vaccination bill. At 7:35 p.m. he posted a photo of the bill’s name and wrote, “Holocost [sic] has begun! I’m done with this bullsh*t. Time to step up or ship out!”

His wife replied, “This has NOTHING to do with health. It’s about power and control. Rise up.” Varnum replied to his own post saying, “All of our guns are next, been trying for years!”

One of Varnum’s Facebook profile photos shows his support for the National Rifle Association gun lobbying group, with the words, “I’m the NRA.”

3. Varnum’s Wife Told Police in 2015 Her Husband Had ‘Numerous Guns’ During an Incident When He Got Drunk & Barricaded Himself in His Garage Because He Thought ISIS & the Taliban Was Coming

Varnum is married and has two young sons, according to his Facebook profile. On May 29, 2015, his wife called the police during an incident at their home, according to court documents. His wife told officers her husband was “having behavior issues.” She told the Carroll County Sheriff’s Department that her husband had taken a rifle with him into their garage because he feared ISIS fighters were going to come and fight him.

Varnum’s wife told police that her husband had “numerous guns.”

When police arrived at their home, Darryl Varnum told officers that Taliban fighters were coming to his house and that he had been drinking vodka, according to court documents. The officers said Darryl Varnum was cooperative and non-violent while interacting with them and he was taken to a hospital for a mental health evaluation. There are no records of Varnum ever facing charges in connection to the 2015 incident.

According to the affidavit in the threat case, police said Varnum owns a registered Ruger .45 caliber pistol. He does not have a concealed carry permit or any other firearm licenses. It is not clear if investigators found any other weapons in Varnum’s home when they searched it during to his arrest.

Darryl Varnum works as a senior cyber systems engineer at Sealing Technologies Inc., according to his Linkedin profile. In court documents, investigators said, “Varnum is currently working at the Defense Information Systems Agency Headquarters” at Fort Meade in Maryland, under a contract between DISA and Sealing Technologies. Varnum has access to sensitive information as part of his job. He says on Linkedin that he has “DOD TS//SCI FSP” clearance, meaning he has an active Department of Defense top-secret clearance for sensitive compartmented information and has gone through a full-scope polygraph.

Varnum wrote on Linkedin, “Cyber Security Systems and Virtualization Engineer with excellent communication and organizational skills; functions well in a team environment while being self-motivated to work efficiently without supervision. Over 18 years of experience in the Information Technology and Security field; able to adjust to changing work priorities and changing work environments.”

He added that part of his job is to, “create and enforce policies and procedures to secure network systems from cyber threats.”

He has worked at Sealing Technologies since October 2017, “In support of the JCTR Program, Virtualization of JRSS (Joint Regional Security Stack) vJRSS using Hybrid On-Prem (Nutanix) & AWS Cloud as platforms.”

Varnum was previously a senior cyber systems engineer at IPKeys Technology, also at Fort Meade, and was a senior consultant for the U.S. Public Sector at Citrix from May 2016 to 2017 in Bethesda.

He spent eight years at Northrop Grumman as a cyber systems engineer and in the cyber intelligence divisions. He also worked from 2005 to 2007 at Lockheed Martin.

5. Varnum, Who Faces Up to 10 Years in Prison if Convicted, Will Complete a 28-Day Inpatient Program at a Drug & Alcohol Rehab Facility Before Being Brought to Court

FacebookDarryl Varnum with his wife and sons.

Varnum faces up to 10 years in prison if he is found guilty of threatening a federal official. Varnum was arrested on July 8 and held in custody until a detention hearing on July 10. He was ordered to complete a drug and alcohol rehabilitation program at an inpatient facility.

“On July 10, 2019, U.S. Magistrate Judge Beth P. Gesner ordered that Varnum complete a 28-day inpatient program at the Shoemaker Center in Sykesville, Maryland, and return to the court at the conclusion of the program,” prosecutors said.

Varnum will be in court on August 5 at U.S. District Court in Baltimore for his arraignment and a detention hearing.

Read More
5 Fast Facts, Breaking News, Crime, Police
Follow Heavy ↓
Darryl Varnum is an anti-vaxxer and cybersecurity engineer for a Pentagon contractor who is accused of threatening to kill Rep. Frederica Wilson over her support of a vaccine bill.