Linkedin Carolyn Byington was found dead in her home in Plainboro, New Jersey, and her death is being investigated as a homicide.

Carolyn Byington was found dead in her New Jersey apartment in an apparent murder. Police say they were investigating the 26-year-old woman’s death in Plainsboro as a homicide after her body was discovered on Monday, June 10.

Her co-worker, Kenneth Saal, was charged in her murder on August 21, according to the Middlesex County Prosecutor’s Office and the Plainsboro Police Department. Byington and Saal worked together at Engine US, a marketing and advertising firm based in Princeton, New Jersey. Other co-workers called police after they became concerned because she had not returned from lunch.

Saal, of Lindenwold, New Jersey, is charged with first-degree murder and possession of a weapon for unlawful purpose. A possible motive and the cause of death have not been made public.

“I sincerely thank and commend the many dedicated members of law enforcement who have worked tirelessly to solve this homicide and apprehend the defendant. The investigation has been a top priority since the crime occurred,” Carey said in a statement. “I hope that the arrest brings at least some sense of peace to the friends and family of Carolyn, as well as the greater community.”

Saal worked as an accountant at the firm, where Byington was in project management. Saal is married and the father of a 1-year-old daughter, according to social media profiles. He is being held at the Middlesex County Jail.

Byington was a New Jersey native who worked at a marketing and advertising company:

Byington Was Found Dead by Police Conducting a Welfare Check

Carolyn Byington was found dead Monday evening by Plainsboro Police Department officers. “The Plainsboro Police responded to the home after they were asked by coworkers to do a wellness check on the victim at approximately 5:57 p.m. Upon arrival the police found the victim deceased in her apartment. She was pronounced dead at 7:36 p.m.,” authorities said in the press release.

Byington had lived in the apartment on Hunters Glen Drive since 2016, according to public records. She appears to have been living alone.

“An autopsy by the Middlesex County Medical Examiner has ruled the manner of death a homicide,” the press release said. The cause of death has not been made public. Few other details about the case have been released.

Neighbors told WABC-TV they heard faint screams coming from the apartment Monday afternoon, about 1 p.m., along with what they thought was furniture moving, but did not see anyone leave.

According to News 12 New Jersey, Byington had been seen coming home from work for lunch Monday afternoon. Her co-workers called police when they became concerned that she had not returned to the office.

Middlesex County Prosecutor Andrew Carey told the Bridgewater Courier News that the case was “frustrating.” After an investigation by the prosecutor’s office and Plainsboro Police that lasted more than two months, charges were filed against Byington’s co-worker, Kenneth Saal.

Kenneth Saal is being held at the Middlesex County Jail, according to online records. It is not clear when he is scheduled to appear in court. Saal could not be reached for comment by Heavy and it is not clear if he has hired an attorney.

“The investigation is active and is continuing. Anyone with information is asked to call Detective Tim McMahon of the Plainsboro Police Department at (609) 799-2333 ext. 1627, or Detective David Abromaitis of the Middlesex County Prosecutor’s Office at (732) 745-4436,” the prosecutor’s office said in a press release. “As in the case with all criminal defendants, the charges against Saal are merely accusations and he is presumed innocent until proven guilty.” 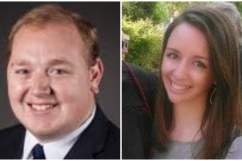 Carolyn Byington worked at the New York City-based marketing and advertising firm Engine US at its office in Princeton, New Jersey, according to her Linkedin profile. Byington was a senior associate in project management and had been in that role since May 2017. She previously was an associate in project management from February 2016 to April 2017 at the same company.

The company said in a statement, “Engine is in mourning over this shocking, senseless tragedy. Carolyn was deeply cared about by her colleagues. We extend our heartfelt thoughts and prayers to her family and friends.”

Byington previously worked as a financial operations assistant at Crum & Forster Enterprise in Morristown, New Jersey, from 2015 to 2016, and was an intern at Impact 100 Garden State, Merrill Lynch, nVision NYC and Novita’.

Carolyn Byington, at the center in the front of the photo, pictured in her Facebook cover photo.

Carolyn Byington grew up in Basking Ridge, New Jersey, and graduated from Ridge High School in 2011. She is survived by her parents, Robert Byington and Jennifer Byington, and her younger sister.

Byington graduated from Lafayette College in Pennsylvania in 2015 with degrees in international affairs and anthropology and sociology. She also spent a year studying abroad in Japan and was an English teaching assistant while studying there.

Byington has been involved in the Junior League of Greater Princeton since August 2016. While at Lafayette, Byington was an event coordinator for the American Cancer Society for three years and was a senior interviewer in admissions.

Byington overcame a brain defect that she was born with and in her obituary, her family asked for donations to be made in her name to the doctor who helped her live.

“We want the last chapter of Carolyn’s life to be one where her friends and loved ones can help others in her memory. Carolyn was a true philanthropist who was active in many charitable organizations, and we know she would have wanted to help other children under Dr. Souweidane’s care by supporting his research,” said Carolyn’s mother, Jennifer Byington, wrote on the Children’s Brain Tumor Project donation website.

The website adds, “Dr. Mark Souweidane co-founded the Children’s Brain Tumor Project at Weill Cornell Medicine, under which he leads a team of researchers. Your support of his lab will enable his team to explore new inroads into researching Chiari malformation in addition to supporting his basic research on innovative surgical approaches to pediatric brain tumors. We thank you for making a donation in memory of Carolyn.”

READ NEXT: Florida Teacher Smiles in Her Mugshot After Stabbing Her Husband: Cops