Facebook Jerri Kelly is accused of holding four black teens at gunpoint while they were fundraising for their football team in Wynne, Arkansas. She is the wife of Cross County jail administrator Joe Kelly.

Jerri Kelly is an Arkansas woman and wife of Cross County jail administrator Joe Kelly who was arrested after police say she held four black teens at gunpoint while they went door-to-door to raise money for their high school football team in Wynne.

The boys were selling restaurant coupon cards for Wynne High School when they were forced to the ground outside of Kelly’s home on Montgomery Drive on August 7. She aimed her gun at the boys until police arrived and determined they had done nothing wrong, according to WREG-TV.

The 46-year-old Kelly was not arrested until almost a week later, on Monday, August 12, when charges of aggravated assault, false imprisonment and endangering a minor were filed against her. Kelly was quickly bonded out of the Cross County jail, where her husband works.

“As always, the Wynne Police Department is committed to protecting our citizens,” Wynne Police Chief Jackie Clark said in a statement. “Our kids and elderly are our most precious assets and all the necessary steps will be taken to protect them.”

Kelly and her husband could not be reached for comment by Heavy and it is not clear if she has hired an attorney who could speak on her behalf.

Here’s what you need to know about Jerri Kelly:

1. Two of the Teens Had Their Football Jerseys on When Jerri Kelly Came Out of Her House With Her Gun & Forced Them to Lie Down With Their Legs Spread & Arms Behind Their Backs

The teens told WREG-TV that two of them were wearing their Wynne High School football jerseys when they walked up to Jerri Kelly’s home on the morning of Wednesday, August 7. Kelly came out of her Morningside Drive home with a gun as the boys walked up her driveway, one of the teens, a 16-year-old, told the news station.

Kelly is accused of forcing the boys to get down on the ground onto their stomachs with their legs spread and their arms behind their backs. The teens say she told them she had already called 911 and demanded they remain on the ground until officers arrived. An officer arrived and sorted out the situation, according to police.

A parent wrote on Facebook, “These boys had on their football jerseys, and this is common around this time of year in Wynne. All this lady had to do was say no thank you and close the door, but instead she chose to pull a gun out and traumatize these boys.”

Chief Jackie Clark said officers were dispatched about 10 a.m. to a report of “suspicious persons,” according to Wynne Progress.

“Upon arrival of our officers, four juveniles were found lying on the ground with a female adult with a gun standing,” Clark said in a press release. “Our officer had the children stand up and they explained they were selling discount cards for a school athletic program.”

The boys were taken to their homes and an investigation was started, but Kelly was not arrested until the next week. According to reports, the delay in the charges was because the local prosecutor was out of town.

The grandmother of one of the boys told WREG, “My grandson said, ‘Grandma, if she’d had shot me, I had made my peace with God.'”

The Wynne school district said players sell coupon books each year, but after the August 7 incident, they are considering doing away with door-to-door fundraising by students. “We intend to review all methods of fundraising used by school groups in grades K-12 to insure the safety of our children,” Superintendent Carl Easley said in a statement. 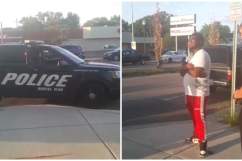 2. The Cross County Sheriff Says Kelly Did Not Have a Mugshot Taken at the Jail Because She Had a ‘Medical Issue’ During the Booking Process

Jerri Kelly and her husband Joe Kelly with their children.

Jerri Kelly was booked at the Cross County jail, but did not have her mugshot taken and was not listed on the jail website, as is typical procedure for arrests in Wynne, Arkansas. Jail officials said that she did not receive special treatment because her husband, Joe Kelly, is the jail’s administrator. They said she suffered a medical issue during booking and a mugshot photo was not taken because of that.

Cross County Sheriff David West told WMC-TV, “During that time she was as at the jail, a bondsman arrived and bonded her out, and they went back home,” West said. “I’m professional. My department is professional. There was no special treatment. She went through the steps just like any other person would.”

A local news site briefly used a mugshot of an African-American woman with the last Kelley after mistaking her for Jerri Kelly.

Joe Kelly has been working for the Cross County Sheriff’s Office as jail administrator and 911 coordinator since November 2018, according to his Linkedin profile.

“The Cross County Jail and Detention Center is under the leadership and direction of Joseph Kelly, serving as Jail Administrator,” the sheriff’s office says on its website.

A local resident wrote on Facebook, “For people who dont know the story: This happened in broad daylight, A group of African American boys were going door to door in THEIR neighborhood selling tickets for their football team and they were in fact in uniform (this was confirm by police officers) The lady who held them at gunpoint stated she watched them go from door to door. She watched them get chase by a neighbors dog. She watched the neighbor come and apologize to the young boys and get their dog. Nothing about them was suspicious or threatening. They didnt even make it to her door , she came out with a gun and held them at gun point threatening to shoot and killl them if they moved. She broke the law and traumatized those young boys for no reason. This is a messed up situation that the Sheriff Department is trying to cover up !!”

Another resident said, “This is not right. It breaks my heart to know how scared these boys were. If she were scared she just shouldn’t have opened her door.”

3. Kelly Has Lived in Wynne Since 2008 & She Worked for Several Years in the Professional Responsibility Bureau for the Collier County Sheriff’s Office in Florida

Jerri Kelly, who also goes by Jerri Holley Kelly and Jerri Woelke Kelly, has lived in Wynne, Arkansas, since 2008, according to public records. She has been married to Joe Kelly for 20 years.

According to a now-deleted Linkedin profile, Jerri Kelly worked as a case manager in the Professional Responsibility Bureau at the Collier County Sheriff’s Office in Florida from 1997 to 2015. According to its website, the Professional Responsibility Bureau investigates misconduct and complaints against deputies in Collier County for the sheriff’s office.

“The public has the right to efficient, fair and impartial treatment. the Professional Responsibilty Bureau protects the relationship between the CCSO and the public by investigating all allegations made against CCSO members by the public or any agency member,” the sheriff’s office says on its website. “PRB works to ensure members abide by Agency values and makes certain each member maintains high standards of conduct and professionalism. Corrective measures are taken when members are found to be non-compliant with Agency policy and procedures. Furthermore, PRB investigates all member misconduct allegations whether the complaint is anonymous or not.”

Joe Kelly also worked at the Collier County Sheriff’s Office, from 1998 to 2007, according to his Linkedin profile. He was a criminal investigator and sergeant.

Jerri Kelly is originally from Tennessee and studied at Tennessee Technological University.

4. After Her Arrest, Kelly Changed Her Facebook Profile Picture to a Graphic About PTSD

Jerri Kelly changed her Facebook profile photo to a graphic about PTSD and then made her cover photo a graphic about traumatic brain injuries, before eventually deleting the page entirely. It is not clear if Kelly was implying that she suffers from PTSD after a TBI.

Her brother told WHBQ-TV that Kelly is disabled and suffers from seizures and “felt threatened” by the students.

Bill Winkler, who lives in Kelly’s neighborhood, told WMC-TV it isn’t uncommon to see teens raising money, “Usually, it’s right before football season, late summer or early fall the kids were out selling these discount cards. They’re just kids. You worry about your neighborhood, and you wonder who is this person.”

Kelly was released after posting $10,000 bond, officials said. She is scheduled to appear in court on Thursday, August 15. She was charged with four counts each of aggravated assault, first-degree endangering the welfare of a minor and false imprisonment.

Kelly is scheduled to appear in court on Thursday, August 15.

“As we focus on our children, no bond will ever be set too high to protect our children, but in the real world bonds are only set to guarantee appearances in court. Sometimes as police officers or citizens we don’t always agree with bonds being set too high or low, but our goal is always to ensure justice is served in the end,” Wynne Police Chief Jackie Clark told WMC-TV. When asked if Kelly received preferential treatment, Clark said, “This is about those four kids, and our focus is completely on those kids.”

Loading more stories
wpDiscuz
0
0
Would love your thoughts, please comment.x
()
x
| Reply
Jerri Kelly is the wife of Cross County Jail administrator Joe Kelly who arrested after holding four black boys at gunpoint in Wynne, Arkansas, while they were fundraising.