In a lengthy and narrated Facebook Live video taken in Royal Oak, Michigan Tuesday, a young black man is seen being detained by several police officers, one whose patrol car is pulled up on the curb, after a white woman called 911 to report him as suspicious, alleging he stared at her.

While it’s difficult to catch all of what Myers said as the live video is being narrated, he can be heard saying that he was walking from his car going to the Inn Season Cafe restaurant where his girlfriend was waiting for him to dine, when several police officers pulled up saying they had a report that he looked “suspicious.”

“What makes it worse,” he tells the officer, is that if it had been a “white lady, I’m pretty sure you would have just let her go eat.”

After more than 30 minutes, police let him go.

Heavy contacted Royal Oak Police Department spokesman Lt. Keith Spencer for comment. When that request is returned, if it is, the story will be updated.

After asking that a police supervisor be called as he was questioned and held by at least two police officers, a supervisor on a motorcycle rolls up. He begins to argue that police are just doing their job, addressing Myers, witnesses, Kimiko Adolph, the woman recording, and Inn Season Cafe manager Erin Frey, who never left Myers side.

The supervisor says, “So if someone calls about someone we’re not supposed to respond?”

The officer interrupts: “How do we know until we talk to her,” he asks.

In the 14-minute video of the incident, police are never seen going to the white vehicle parked across the street that contains the woman who allegedly phoned police to begin with.

Myers says that as police pulled up on him, he was walking into the restaurant and nowhere near the car parked across the street, where he’d parked.

And, as is seen and heard in the video, the manager of the restaurant, Inn Season Cafe, stands by the entire time as police question Myers, who was about to enter for restaurant for lunch. Cafe manager Frey repeatedly tells police that Myers was no threat and that the response was inappropriate.

“She doesn’t even know me but she’s still out here standing with me,” Myers says of Frey.

Police say he can go.

Heavy reached out to Myers via Facebook for comment. If that request is returned, the story will be updated. 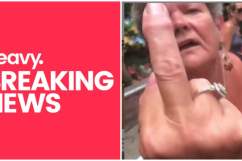 Family: ‘Sesame Place Sallie’ Tells Muslim Woman ‘Go Back Where You Came From’

Kimiko Adolph, who recorded the incident, told Heavy what she witnessed and why she began recording. And said that the woman had been in the restaurant before calling the police on Myers.

Adolph said, as a Black mother of three Black sons, she was “scared” for Myers and went outside to be with him and record what was happening.

“I went out with him because he was surrounded by all whites and alone,” she said, adding that police already had Myers on the sidewalk for 10 to 20 minutes prior. She said when more officers arrived, and she learned why he was being held, she left the restaurant where she’d been eating to record.

Shout out to this black woman, Kimiko Adolph who recorded this, stood by him, possibly saved his life.

A complete queen and a heroine. pic.twitter.com/NtNN32QlUW

Myers’ girlfriend was sitting next to Adolph. “She was scared because she had no idea this was happening as he had dropped her off at the door and was waiting inside for him. Had no idea! It was scary because I have 3 black sons. It’s scary to think you can’t look at someone in passing,” she said. When recording, she said she heard police asking for “his info” and asking “Why was he over there… on and on. I felt he could have been arrested and did not know how young he was till I got there and asks and I was more upset.”

Adolph said she had seen the white woman who had called police: “She was in the restaurant sitting behind me with maybe her son. They paid and he left and she left the opposite way …obviously running into Devin who was coming towards the restaurant.”

Adolph said that people “never talked to her.”

“She stayed and drove off after he was free to go. I’m thinking probably waiting for something to happen so she could feel justified,” she said.

When asked about the police supervisor’s attitude toward her and Frey, she said, “The supervisor said we were ‘inferring’ and did not know the whole story.” But she said she and other witnesses including Frey had seen exactly what occurred. She said first there were two officers who held Myers. And after several minutes of their questioning, Myers asked that a supervisor be called. “He said he did not do anything. Call your supervisor.” 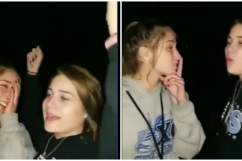 Shout out to this White lady, Restaurant owner who stood by the side of this black man telling cops "If it were me, this wouldn't be happening"

Gave him a free meal and consoled him.

SHE IS ALLY! THIS IS ADVOCACY! WE NEED MORE OF THIS! pic.twitter.com/9H5gk5xqnZ

Frey is the general manager and “stockholder” of Inn Season, a near-four decade gourmet vegan and vegetarian cafe in the Metro Detroit area.

Some are calling Frey an “ally,” as she refused to leave the scene and intervened on Myers behalf never having met him. And her restaurant has been getting a lot of love online for Frey’s response to the incident.

In the video, she can be heard saying she understands that police need to respond to calls, but that in this case, she believed the woman “called because he’s a black guy…that was totally messed up. If that were me walking across the street and walking in this would not be happening … because I was looking at her while I was trying to park.”

Royal Oak Police stop Devin Myers after a white woman called 911 to report him for being suspicious.

The officer says “who called?” And the woman in the white vehicle parked across the street is identified. He ignores it. Frey says she saw Myers and all he was doing was “actually just trying to park his car.” She says the whole incident has “lasted so long,” as the officer calls it “nonsense.”

He says all Myers had to do was say that he was just parking his car minding his own business. He did repeatedly, the officer was told but was nonetheless held by several officers despite having said he had done nothing wrong and had just been parking his car to go eat in the cafe. When they kept him surrounded on the street, he asked for a supervisor, Frey said.

4 Royal Oak Michigan Police officers pull up on a 20 year old black man after a white woman calls and says he was looking at her.

WHAT THE ACTUAL HELL

“This poor guy just wanted to get something to eat.”

Heavy reached out to All Season Cafe and was told Frey, the cafe general manager, was the person who stayed with Myers. Heavy asked for comment from Frey and if that request is returned, the story will be updated.