Kara Gaffney Ross, 53, a jewelry designer and business owner, has been married to billionaire real estate developer Stephen Ross, 79, since 2003. They have four daughters between them, two apiece from their previous marriages.

Ross, who is the chairman of the Related Companies and the owner of the Miami Dolphins, is facing criticism for plans to host a fundraiser for President Donald Trump. Gaffney Ross is co-hosting the event, which is scheduled to take place at their home in Southampton, Long Island, on August 9. Tickets are being sold for as much as $250,000 to sit at the president’s table.

Kara Ross is also known as a philanthropist and runs a company that aims to share stories about female entrepreneurs. On August 6, she may have hinted at her political views in an Instagram post. Gaffney Ross posted a photo of flamingoes that have been shaded in all different colors of the rainbow. She wrote in the caption, “❤️ Every color under the ? #inclusivity”

❤️ Every color under the ? #inclusivity

Here’s what you need to know about Kara Gaffney Ross.

1. Kara Gaffney Ross is an Award-Winning Jewelry Designer Who Began Crafting Pieces as a Teenager

Stack em up?? I LOVE the fashion jewellery line we developed, our “Boutique” line, Kara by Kara Ross It incorporated exotic skins and gemstones. In our exotic skin #handbag line that we successfully launched at @bergdorfs ,(after launching the #finejewelry collection there a few years before) we used TOP quality skins…alligator, ostrich, python etc. We used the best parts of the skins for these luxury bags. We had gorgeous , valuable “scrap” leftover after cutting for the bags These are just some of the pieces that we developed where we used the exotic skin “scrap” in the jewellery. I love to mix colors and textures The exotic skin and gemstones together are GORGEOUS and were a wonderful way to get more use out of something considered “scrap”. As an entrepreneur it’s imperative to try and maximise every dollar spent on materials. This line , also launched at #bergdorfgoodman , was wildly successful and I still LOVE to wear it. #karaross #exoticskin #fashionjewelry #gemstones #stackemup #entrepreneur #femaleentrepreneur #bossbabe #girlboss #classicjewelry #crocodile #python #stingray #turquoise #coral #tigerseye #jewelry #jewelrydesigner

Kara Gaffney Ross has been designing jewelry since she was a teenager. She was inspired after finding a “souvenir tourmaline” during a family vacation to an African safari when she was 13, according to the website Connoisseurs. She designed her first square-cut ring on a gold band and has been creating pieces ever since.

According to her bio on the Council of Fashion Designers of America website, Ross became a certified Gemologist after graduating from Georgetown University. She spent her early career designing custom jewelry for private clients.

The organization boasts that Ross has earned multiple awards as a designer. Her honors included the “GEM Award for Design from the Jewelry Information Center, the Women’s Jewelry Association Excellence in Design Award and Fashion Group International’s ‘Rising Star’ Award for Jewelry Design.”

Kara Ross founded her jewelry company called “Kara Ross New York” in 2003. Made in New York explained that Ross liked to incorporate “alternative materials like jet, lava, wood, and titanium” in her pieces and handbags.

The company was registered with the New York Secretary of State in 2006. According to public online records, “Kara Ross New York” is still an active company. But her storefront on the east side of Manhattan is closed. And the website is “currently unavailable.”

On the website for her new company, Unleashed, it reads in Ross’ bio that she “collaborated with the Obama White House on numerous commissions, and her one of a kind fine jewelry pieces can be found in art museums across the country.”

Our founder @kararossny with our newest film subject @iris.apfel ❤️⁠ ~ WE CAN'T WAIT to show you what we've been working on ? ~

Kara Ross spends her time these days focusing on communication and storytelling company called “Unleashed World Inc.” Public records show it was registered with the state in September of 2017 as a domestic non-profit organization.

The company aims to shine a light on female leaders and entrepreneurs. The home page of the website explains in bold, underlined lettering, “We celebrate & support female artisans & entrepreneurs through authentic storytelling.”

A great way to start the day on #internationalwomensday ?? Loved speaking on a @HEYMAMA panel with some ROCK STAR women about Reframing The Way Women Work. Thank you for including me ? @unleashed_world #entrepreneur #femaleentrepreneur #girlboss #bossbabe

Kara Gaffney Ross launched Diamonds Unleashed in 2015 as a part of her “Kara Ross New York” company. She designed three jewelry collections but had no intention of keeping the profits. Instead, she told the New York Times that all of the net profits would be donated to charities that benefit young girls and their pursuit of education.

Ross said her company decided to donate part of the funds to Girls Who Code, which educates teenagers and encourages them to pursue careers in technology. The second organization was She’s the First, which benefits girls living in poorer areas around the world.

Ross told the newspaper at the time, “I’m at a point in my life where I’ve achieved what I wanted to achieve. I like the puzzle of building a business, but I want to give back.”

Diamonds Unleashed does not appear to be in operation any longer, but she has rolled its efforts into her new company. Unleashed World continues to donate profits to support girl’s education and job creation.

“I am very lucky to say that over a successful career in fashion [spanning 25 years], I have achieved everything I set out to accomplish. I wanted to focus my energy on giving back and helping the next generation of strong female leaders. I believe that if a young girl is educated she will have a huge positive impact on the world. If a girl is educated, she can then help educate her children, her family, her community and everyone around her.

Education and opportunity is essential in order to break the poverty circle. I turned my business into a vehicle for philanthropy because I really believe we can make a difference. I wanted to use my skill sets, network and access to do make women feel good, look good and to do good. I also have such a strong ‘GIRL SQUAD’ of support. When women get together powerful things happen and we have to pass it onto the next generation.”

5. Kara Ross Says She Supported Her Two Daughters Without Help From Her Ex-Husband

Kara Gaffney Ross explained in the Dress For Success interview a little bit about her first marriage. She said that her first husband worked on Wall Street and suffered from a gambling addiction. Ross says he lost the money they had been saving for their two daughters’ college education.

Ross says she divorced him and supported her two children on her own thanks to the growing success of her jewelry collections. She explained, “At the time I had been in the jewelry world for about five years after having graduated from Georgetown & the GIA. I had a collection I was selling to Neiman Marcus and had the start of a very successful word of mouth diamond business. The girls and I were in a small two bedroom apartment and I worked my butt off to stay afloat. I was a single mom in NYC with two kids to support and my business… I was [economically] independent, I was very proud of my work and my business and I was happy.”

These days, Ross’ financial situation is certainly much more stable. She and husband Stephen Ross tied the knot in 2003. They own a house in Southampton on Long Island, and a house in Palm Beach, Florida. Their Manhattan penthouse was featured in Architectural Digest in 2015. Their penthouse is in the Time Warner Center and overlooks Central Park with floor-to-ceiling windows. 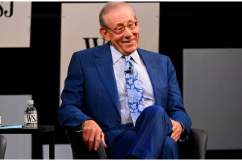