Pat Cipollone, the White House counsel who is leading the defense of President Donald Trump during the impeachment trial in the Senate, is the son of Italian immigrants and is described as a devout Catholic.

Cipollone’s religion has influenced his professional career. For example, he previously served as an attorney for the Catholic organization called the Knights of Columbus. He also co-founded a charity that is focused on supporting relations between the Catholic community and the state of Israel.

During his teenage years, Cipollone attended Covington Catholic High School in Kentucky. He has also been praised by Fox News host Laura Ingraham as her “spiritual mentor.” She has said that Cipollone was instrumental in her own conversion to Catholicism.

1. Pat Cipollone Took a Break From Commercial Litigation In the 1990s to Represent the Knights of Columbus

GettyWhite House Counsel Pat Cipollone (R) outside the East Room of the White House on May 22, 2019.

After serving in the Justice Department during the first Bush administration, Pat Cipollone pursued a career in commercial litigation. He accepted an offer at the international firm Kirkland & Ellis in 1993. He represented major corporations such as General Motors.

But Cipollone made the decision to step away from that kind of lucrative legal work in the mid-1990s. He chose to work instead for the Knights of Columbus. It is a Catholic fraternal organization launched in 1882 and now includes nearly two million members. The mission statement on its website reads, “We are Catholic men building a bridge back to faith. There is much good and necessary work to be done in this world, and that’s what Knights do every day.”

The Knights of Columbus participate in charity work and is also an insurance company. Bloomberg Law reports that while serving as legal counsel for the Knights of Columbus, Cipollone’s work involved overseeing “a variety of regulatory and other issues.” During the 1990s, the Knights were also named in class-action lawsuits for alleged “vanishing premium” violations, according to the Insurance Journal, and Cipollone would have been involved in litigating those cases.

Cipollone returned to Kirkland & Ellis in 2001. He remained there for another decade before moving over to Stein Mitchell as a partner.

Pat Cipollone launched the Foundation Stone Institute in 2016. It is a non-profit organization that is committed to improving understanding between Catholics and the Israeli people.

Cipollone co-founded the charity along with his Stein Mitchell colleague, Jonathan Missner. Missner previously served as the managing director of national affairs for the American Israel Public Affairs Committee. The president of the Israel Seminar Group, Asher Afriat, was also a founding member.

The Jewish News Syndicate reported that Cipollone and Missner traveled to Israel several times together and attended both Catholic masses and synagogue services together. Missner told the news outlet that both he and Cipollone were “struck” by the similarities that their respective services shared.

The Foundation Stone Institute explains on its website that it leads trips to Israel in order for Catholic and Israeli “thought leaders” to build “new bonds of understanding by uniquely weaving together the religious pilgrimage focused on ancient Israel with the more modern pilgrimage focused on contemporary Israel. These trips become the bedrock of opportunity for further education and collaboration opportunities between Catholics and Israel which ultimately seed the shift in renewing the relationship.”

The organization also discusses establishing a firmer alliance between Catholics and the Jewish people. “Catholics and Israelis too often suffer from a lack of mutual understanding, and historic divisions have created a reality in which many Catholics are distanced from the modern State of Israel. They often do not fully realize the unique connection of Jews to the land of Israel nor gain exposure to Israel’s modern achievements.”

Cipollone stepped down from the board of the Foundation Stone Institute when he accepted the job of White House counsel.

GettyPeople say the Rosary during the National Catholic Prayer Breakfast at the Washington Hilton Hotel April 18, 2008.

Pat Cipollone was one of the founding members of the National Catholic Prayer Breakfast. Launched in 2004, the annual event features prominent Catholic speakers who lead participants in prayer. Former Senator Rick Santorum was another founding member.

According to its website, Cipollone and the other founders were motivated to launch the event “in response to Saint John Paul II’s call for a New Evangelization.” It’s estimated that about 1,500 people participate each year. The event is open to anyone, regardless of faith, and is considered a non-partisan event.

The next National Catholic Prayer Breakfast was scheduled for March 30, 2020.

4. Cipollone Formerly Served On the Boards Of Various Catholics Organizations But Stepped Back From Those Roles After Accepting the White House Job

Pat Cipollone has long been active with Catholic organizations. He previously served on the board of the Catholic Information Center. He stepped down from that role after going to work in the White House.

According to its website, the organization provides classes to learn about the history and traditions of Catholicism. The group is dedicated to “making the Catholic Church alive in the hearts and minds of men and women living and working in our nation’s capital.”

Cipollone also stepped back from the Sanctuary of Culture Foundation, which is dedicated to preserving the Vatican Apostolic Library.

The Catholic News Agency reported that Cipollone also previously served on the Board of Visitors for the law school at the Catholic University of America.

5. Pat Cipollone Supported Putting a Referendum On Same-Sex Marriage On the Ballot in Maryland in 2012

On the issue of same-sex marriage, Pat Cipollone supported the idea of allowing voters to weigh in on the subject in Maryland. (Cipollone lives outside of Washington, D.C. in Maryland with wife Rebecca and their children).

The state’s General Assembly passed the Civil Marriage Protection Act in 2012 and it was signed into law by then-Governor Martin O’Malley. It made same-sex marriage legal but included provisions protecting religious clergy members from being forced to officiate ceremonies. More than 103,000 people in Maryland, including Cipollone, signed a petition demanding that the issue be placed on the ballot.

Question #6 on the 2012 ballot asked voters whether they supported or opposed the Civil Marriage Protection Act. The language included:

“Establishes that Maryland’s civil marriage laws allow gay and lesbian couples to obtain a civil marriage license, provided they are not otherwise prohibited from marrying; protects clergy from having to perform any particular marriage ceremony in violation of their religious beliefs; affirms that each religious faith has exclusive control over its own theological doctrine regarding who may marry within that faith; and provides that religious organizations and certain related entities are not required to provide goods, services, or benefits to an individual related to the celebration or promotion of marriage in violation of their religious beliefs.”

A majority of voters approved of the Civil Marriage Protection Act. 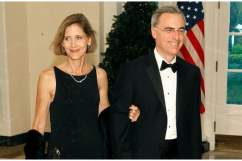