Copper Stallion Media, a wedding videography studio based in Texas, sparked outrage over the weekend for a post on Facebook attacking a recently widowed groom on his would-be wedding day, according to ABC7. The post was directed at Justin Montney, who sought a refund from Copper Stallion after his fiancé, Alexis-Athena Wyatt, died in a car accident in February. The Copper Stallion Media Facebook page is no longer available, but the post was captured in screenshots and circulated the internet.

Today would have been the day where we would have filmed Justin and Alexis’ wedding in Colorado Springs.

After what Justin pulled with the media stunt to try and shake us down for a refund, we hope you sob and cry all day for what would have been your wedding day.

The post included the photo of Justin and Alexis featured on the couple’s wedding page on The Knot. The post received swift backlash, and the company has been branded “disgusting” and “heartless” in a massive tide of negative reviews on Yelp, The Knot and other sites. 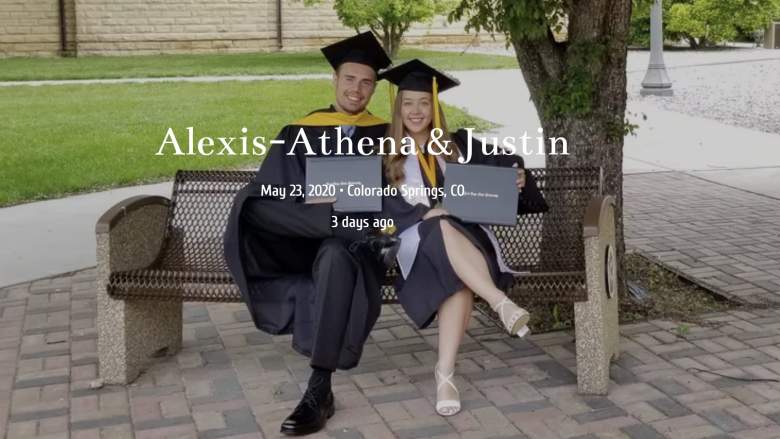 Alexis-Athena Wyatt died on February 4 in a car accident on Highway 24 in Colorado Springs. She was 22 years old. According to ABC7, Montney reached out to Copper Stallion to inform them of his fiancé’s death. The company expressed their condolences, but refused to refund the $1,800 deposit because the pair had signed a non-refundable contract, prompting Montney to leave a negative review on the company’s page on The Knot, according to Montney. That page has been taken down. After writing the review, Montney says Copper Stallion threatened to sue him. At that point, Montney reached out to a local news station with his story, ABC7 reported. At the time of the news appearance, KRDO reported that it could not reach Copper Stallion for comment.

Copper Stallion Purchased the Domain Name JustinMontney.com To Tell Their Side of the Story

JustinMontney.com is still up online, but the Copper Stallion Media website no longer redirects to the page. JustinMontney.com now features a YouTube video of the song “Disillusioned” by A Perfect Circle. On the site previously, Copper Stallion described Montney’s actions as a “smear campaign.” “The contract was non-refundable. We will NEVER refund Justin Montney even with the online threats and harassment,” the site insisted, adding, “If we knew he was going to shake us down, we would have charged a higher deposit.”

The site said, “Since this smear campaign started, we have received numerous emails, phone calls and comments online. We are documenting everything to build our case against Justin Montney. We have acquired this domain name for the next two years.” It added, “It is not right that people can go online and trash a company.”

“In the news story he admits that the contract was non-refundable but says we should give the money back due to the circumstance,” said the site. “Life is a bitch, Justin.”

Copper Stallion Implied That an Employee Killed Herself in Response to Public Outcry, According to Screenshots of Their Facebook Page

Screenshots of a now-deleted post on Copper Stallion’s Facebook page show the company wrote that an employee, Allison Davis, had committed suicide. The screenshots read:

It is with great sadness that we inform you of the passing of our client experience manager, Allison Davis. Allison took her own life earlier this morning. She had been a valued member of our team for the past two years and will be missed. Allison was a wife, mother, sister, and daughter.

On May 20, 2020, our company was subject to an online smear campaign for not refunding a client who died in a car accident. The client signed a non-refundable contract. As a result, friends, family, and strangers have emailed, called, and left reviews of our company on social media. Online bullying is real.

We are in contact with local authorities to see what can be done in terms of criminal charges. We are also reaching out to legal counsel to see what legal action we can take to obtain a judgment for damages. No company should have to go through this…

An additional screenshot raises doubts about the timing of the death of Allison Davis. This screenshot suggests that Copper Stallion first posted about her death in 2018 and that the company falsely implied that Davis committed suicide because of public outrage in recent days. The details and veracity of these posts have not been confirmed.